Space stations are a technological reality, but also a quintessential locus for projecting dreams about a bright technological future which might take humans to the stars.

I’ve been priding myself on never skipping a blog post – well, I may have skipped one, a couple of years ago when I was undergoing surgery, which seems like a valid reason. But a couple of weeks ago, one of my recently adopted super cute space bunnies got out of her enclosure, and next morning I found her lying on my front lawn with a big hole in her neck. This has  obviously considerably unbalanced the universe, as I now only have Yin, and no Yang.

So, I clean forgot that my blog was due that week. The good news is that within less than a week,  I was able to find a new friend for Yin, who took the loss of her sister much to heart and was spending way too much time lying apathetically in her basket. The new rabbit is a stroppy ball of fluff whom I have dubbed “Te Po” – Maori for “The Night” – because her dark fur with its blueish and bronze highlights does look rather like the night sky.

She isn’t Yang – Yang was special. I was planning to teach her some computer, since she clearly had an affinity with technology! But she’s a darling and a beauty, and she and Yin, after sorting out some stuff in a rather dramatic boxing match, quickly became best buddies. 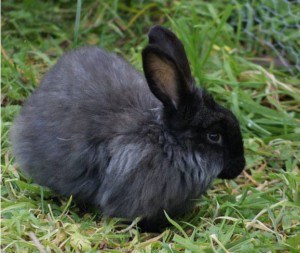 But, enough of my pets. Time to look at some art! It’s been a while since I’ve posted science fiction, rather than fantasy or mythologically inspired art, and I intend to remedy this omission.

To my mind, what distinguishes science fiction art from most traditional art genres – landscape, still life, portraiture, you have it – is that it finds aesthetic appeal in modern technology. If, say, in a traditional landscape piece a power pole would be regarded as a “flaw” – something the artist might carefully edit out – then a science fiction artist might take the rhythm of power poles in a landscape as their motive. And why not – it is, after all, the reality that surrounds us!

In the following series of blog posts, I’d like to look at how artists interpret technology – both as it is, and as it might be in the future. Space stations seem a good start: they are a technological reality, even if one that does not form part of the everyday experience of most people – unless they happen to be astronauts! But the are also a quintessential locus for projecting dreams about a bright technological future which might take humans to the stars.

All images are copyright the respective artists, and may not be reproduced without permission.

Hot Enough For You? Science fiction, the Weather And Anarchy In the UK.

New Releases in Science Fiction Romance for May