In this week’s viewing: Gatchaman Crowds is ready for an intellectual brawl, Rokka and Charlotte have their full teams assembled for some smackdown, and more! 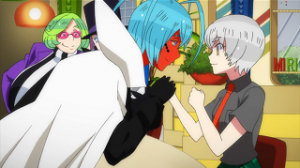 Gatchaman Crowds insight #4 – Well, so much for that whole keeping-the-alien-under-control thing. Gelsadra has spotted an opportunity for really direct democracy, and is now competing for a chance to govern an entire country via the ultimate in instant polling. How could this possibly go wrong?

Gatchaman Crowds insight is now ready for a rousing debate on this and related topics, having established the points of view that nearly all the major characters. Gelsadra is all about establishing world peace through absolute consensus. Hajime represents the opposing view, that some disagreement is a positive and necessary thing. In fact, she literally embodies it, as long as Berg-Katze resides in her.

Jō, the cynical civil servant, is there to be the voice of the nanny state, arguing that humans can’t be trusted with the power of CROWDS yet, and some probably can’t be ever. Rizumu, the leader of VAPE, is the representative of a much more pessimistic version of the same view, drawing on evolutionary psychology. Rui is the ultimate idealist who believes that everything will eventually sort itself out if everyone is given the same power, even when faced with trolls running rampant.

Tsubasa is the activist who wants to ignore the airy philosophizing and just bulldoze a straight path to the desired result. And Milio is, of course, all the media, just looking for the angle that gets the most attention.

The best part is that this is a nice honest brawl. The writers are just letting everyone go at it without any signs that a simple solution will be imposed. It’s about ideas, not message.

Speaking of unpredictability– this is exactly the sort of show to throw in references to current events if they suit it, but did anyone guess that the first one would be to Stationmaster Tama? 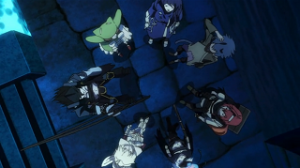 Rokka: Braves of the Six Flowers #4 – As promised in the previews, here we are at last at the moment when seven people show up for the meeting of the six champions. Time to start the theorizing about the identity and nature of the impostor.

One thing that struck me about the legend as recounted in the first episode is that the six champions of humanity aren’t the only divine heroes chosen. It sounded like the demons get a new champion every time too. And this episode helpfully demonstrated that some demons have the ability to change to human form. So, the champion of evil might have decided the best way to defeat the heroes was to create doubt and division among the heroes.

If that’s the case, I’d guess it isn’t Flamie, whose motives have already been examined, nor Hans, because the champion of evil should be good enough at disguise to not come across as a creepy scary dude. I don’t think it’s Adlet unless we’re dealing with a very unreliable narrator, but it could be Nashetania (or a demon taking her place– handy that with the phantasmal barrier in place, no one can check up on that sort of thing) or any of the others.

Whatever’s going on, it looks like the heroes will be spending as much time fighting each other as the demons. 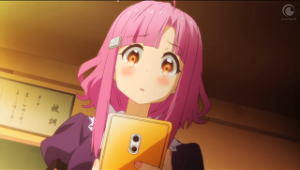 SCHOOL-LIVE! #3 – Megumi’s turn to be in the spotlight fills in a lot more about the zombie apocalypse and the beginning of the School Living Club. It turns out to have been Yuki’s poor schoolwork that kept her and Megumi at school late and led to their chance to survive.

Yuki really is the heart of the club. Even though she’s now retreated into delusions, keeping her confined and entertained gives the rest of the group something to do other than just exist day after day.

The zombie outbreak follows typical horror-move etiology, being apparently spread via bites and taking effect almost immediately. It seems to have started near the school, which explains the speculation that maybe it’s just localized to their area and help might be coming any day, but something that virulent has probably spread all over the world.

There are no real clues to how it started, but it doesn’t matter for this sort of story. What matters is that it’s happened and these are the circumstances the characters have to deal with. 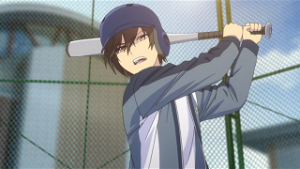 Charlotte #4 – Kōshien Stadium is the host to the final stages of a nationwide high school baseball tournament. When Takato talks about going there, he’s planning for his team to win their regional tournament, at minimum, just on the strength of his ability and one good catcher. Presumably just getting into the national tournament was all he needed.

With Yusa/Misa now on the student council, it’s fun to see the whole team in action, but a third episode in a row with much the same story is getting a little repetitive. It’s not necessary to actually show Yusa and Misa being walked through the same process we’ve already seen twice, and the bit about nearly everyone going gaga over having an idol present could have been squeezed into another story.

But I think there was a specific purpose to this episode. Nao’s odd request to Yū at the very end suggests she’s noticed something about his ability that even Yū doesn’t know. I think it might be related to his quick improvement in batting skills. Maybe he’s picking up some sort of skills or personality from the people he possesses. That could explain why she makes a point of mentioning his super-developed cheating skill.

Abandon All Hope – Why We’d Be Screwed if Aliens Invaded

Is there anything more disturbing and fascinating on TV these days?

Tanya returns with the english language version of her interview with Hal Duncan, author of Vellum.

Fly on the Wall by Taral Wayne

Of Mechs and Men: Interview with Russian Artist Fyodor Ananiev