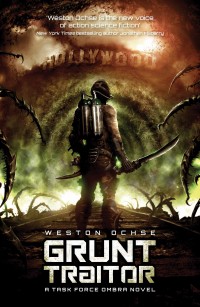 Hollywood spoiled it for us.

We believe in the Will Smith paradigm, that if aliens attack, we’ll figure out a way to save the planet. Seriously? An alien race capable of traveling thousands of light years to our planet with enough space ships to take out our major cities is going to be so vulnerable that one of our small space craft with a talented pilot and a hair-brained scheme could take down their entire task force? Don’t get me wrong, I love Independence Day for its Ra Ra humanitarianism, but it’s a lie.

Blaming Hollywood is too easy. It’s like blaming our older sister. We all know she’s to blame, plus she’s a bully, so even if we’re wrong, we’ll believe it anyway.

Let’s face it. Publishing spoiled it for us too.

Starship Troopers and Orphanage forget that if an alien can lob something from space with enough accuracy to take out a city, they can also take out military bases and ships. While incredibly fun reads, each of the books works because the aliens aren’t that smart. Still, as humans we hate to lose. As Americans we hate to lose even more. So any book we write that feeds into our need to win win win is a great book, right?

Yes for all the reasons you can think of. I sure as hell love them.

But no, it’s not realistic and isn’t it more interesting to delve into what happens in the face of an implacable superior enemy?

Jack Finney’s Invasion of the Body Snatchers was a smart read. Basically it stated we’re screwed.

David Gerrold’s A Matter for Men did much the same, concentrating primarily on how Earth was being terraformed right around us and we had no capacity to stop it.

I mean listen to me for a minute. If an alien civilization is capable of changing our ecology, do we really think we can stop them? Who’s going to do it? Are we going to contract it out to the highest bidder? Do we wait for congress to come around and vote on something other than their own interests? I have no faith that their deadlock will change even in the face of alien invasion, domination, or global destruction. After all, very few of them believe in the current climate changes, which are either the result of something we’ve done to ourselves, or is an active alien initiative to make our planet more inhabitable for them.

I also don’t buy it that an alien species wouldn’t spend enough time studying us and testing everything about our world.  How could a mere drop of water be their downfall. Didn’t they know it rained on Earth? I mean come on. ET might as well phone home.

Ernest Cline says much the same thing in his newest novel Armada.

Just as I’ve been saying this since I brought about the destruction of the world in my military sci novel from Solaris titled Grunt Life.

The aliens came and kicked our ass. There’s not many of us left. In fact, by the time the military was able to respond, most of the planet was wiped out by purpose-curated alien species. I should write Abandon All Hope Ye Who Enter Here on the covers of all books of the series because the readers are thinking there’s hope that we can still overcome the intergalactic ass whooping that’s been given to us.

I admire that sense of never say die.

I mirror the idea we should never give up.

But it’s akin to an ant giving the finger to an elephant.

Grunt Traitor falls close on the heels of Grunt Life. Humanity still has a foothold. There’s still hope. They’ve shown the ability to confront and conquer many of the different alien species on a small scale, but no longer have the capacity to conduct operations on a global scale. Still, they grasp at even the smallest hope with stronghold grips. They have that same sense of never say die we talked about earlier. They want to fight for their friends and family. Like all good soldiers, they want to protect the man or woman to the left and to the right of them.

But then there’s this.

Weston’s Alien Invasion Hypothesis: If a far superior alien species comes down and wants our planet, then they’re going to take it from us no matter what we do.

What I want to see is how my characters react to this.

I feed them hope in drops and dribbles of discovery.

They constantly surprise me by discovering new ways to confront what I’ve made the aliens do to them.

So maybe there is hope.

Maybe there is a chance.

Maybe I’m being too rough on our species’ character.

And I have to tell you, dear friends and readers, nothing gets much worse than having your planet carjacked.

So let’s together see how they react.

Now that you’ve gotten a small glimpse into the mind of Weston Ochse, prepare yourself for an excerpt from Grunt Traitor that we’ll be publishing right here on Amazing Stories tomorrow.

It was as dark as I’d ever seen it outside. The moon was hidden by clouds. Except for the illuminated displays inside the EXO helmets, there wasn’t a single man-made light for miles. I turned back to the team. Even though they towered over me, I was still the boss, and as such, I felt the need to say a few words before the final push.

“So this is my Saint Crispin’s Day speech,” I began, gazing at each one in turn.

I opened my mouth to speak, but before I could utter a word, Stranz asked, “Who’s St. Crispin?”

I paused; I actually had no idea. I just remembered the speech. I looked plaintively at Ohirra, who thankfully spoke up.

“Who St. Crispin was isn’t as important as the speech,” she said. I nodded for her to continue as she glanced at me. “King Henry V gave his men a speech on the eve of the Battle of Agincourt. England was outnumbered five to one. The French had thirty-six thousand troops while the English only numbered about eight thousand.”

“Jesus,” Stranz said. “Talk about walking into a slaughter.”

“Into the Valley of Death rode the six hundred,” Sula murmured.

But Sula corrected me. “Tennyson,” she said.

Ohirra nodded. “‘The Charge of the Light Brigade.’ England didn’t fare so well there. Six hundred light cavalry were sent against more than twenty thousand Russians during the Crimean War.”

“So far this is a sucky speech,” Stranz said. “We know we’re outnumbered. You don’t have to rub it in.”

If Weston has whet your appetite and you just can’t wait, you can get a head start on the rest of us and purchase a copy at the websites shown below: