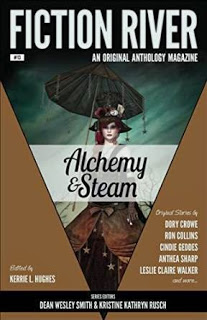 It’s hard to believe that Fiction River had entered its third year of publication. But it has. Time certainly flies. Whether you’re having fun or not.

And you’ll have fun with this installment of the anthology magazine. It’s one of the shorter volumes, but I think I’ve enjoyed this one more than any other, including the time travel issue. Usually there’s one at least one story that isn’t really my cup of tea. That’s not the case here. I liked every single story. And I love the cover illustration.

The theme of this issue is magical steampunk, as you can tell from the title. There’s quite a variety here. Thirteen stories. I’ll discuss my favorites. (Just because I liked them all doesn’t meant there weren’t some that stood out.) I noticed that I tended to prefer the darker stories, especially those that dealt with stage magic or the circus. In fact, I think that would be a wonderful theme for a future issue. Stage magic and/or circuses. Series editors Rusch and Smith, please consider that as a strong hint.

Anyway, before I go into the stories, I want to make one more point. I’ve tried to keep up with every issue of Fiction River, but there are a few I haven’t gotten to yet. Ms. Hughes edited Hex in the City, which is one of those. Some of the authors have also appeared in previous volumes, but by and large, those volumes tended to be the ones I’ve not read. The only name I immediately recognized on the list of contributors was Anthea Sharp. I would have picked up this volume on the strength of her name alone. She’s written a YA trilogy that’s a great blend of both science fiction and fantasy. I’ve read the first two volumes, and need to work the third into my TBR pile.

The other names, like I said, I wasn’t familiar with. Every story was top notch in terms of craft. The voice, the pacing, the setting and characters. Totally professional level work in each case.

So what stories did I enjoy the most?

Angela Penrose gives us “The Rites of Zosimos”, in which a series of dead bodies at an alchemical university lead two faculty members from rival departments to investigate some very deadly rituals. “Heart”, by Leslie Claire Walker, was a very dark tale of a young woman trying to free herself from a necromancer and the lengths to which she’ll go.

In Diana Benedict’s “Pennies for Portents”, a brother and sister are making their way across the country as part of a circus, using a mechanical fortune teller as their sideshow act. Only something goes wrong, and the mechanical fortune teller begins to tell real fortunes. Anthea Sharp tells the tale of a young noblewoman who attempts to carry on a family tradition as she searches for the formula to make “The Perfect Perfume”.

Ron Collins brings us into the 20th century and shows us a rival of Houdinin who can work real magic in “The Grand Dangoolie”. Dory Crowe’s “Weight in Gold” is alternate history tale of a young woman who is helping her father smuggle gold out of England, which has become a vassal state for Napoleon.

And the final circus story is one of the darkest in the book, “Blood Moon Carnival” by Kim May. It’s the story of a phoenix who is essentially a prisoner in a wizard’s carnival of magical animals, a phoenix who attempts to free her love from the magician’s bondage.

Those are the ones I enjoyed the most. But I enjoyed all of them. I don’t read a lot of steampunk, in part because I’m not sure where to start, there’s so much of it out there. These stories were fun. Many of them were clever, several of them had a strong romance component. Some were lighthearted, others dark and disturbing. Almost all of them were by women, something I didn’t really notice until I counted just now.

This volume is a good introduction to Fiction River. Single issues are for sale from WMG, and subscriptions are available. Do yourself a favor and check it out. 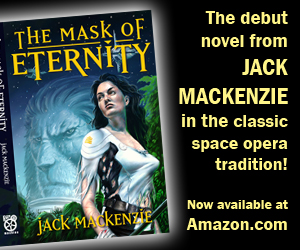