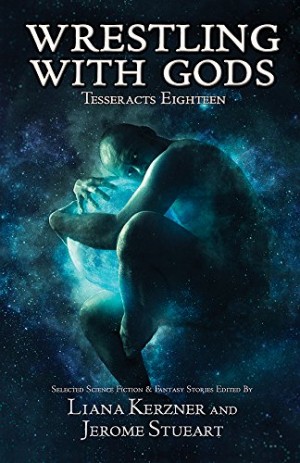 There are certain topics we are never supposed to discuss with strangers: religion and faith head the list. But the authors featured in Wrestling with Gods: Tesseracts 18 wave aside such strictures. Their tales about faith and religion are told from every point of view – believers, non-believers, pagans, animists, reincarnationists, heretics and strugglers – on our own world and in many other times and places. Twenty-six Canadian authors, from seven provinces and one territory, along with an expat studying in Switzerland, bring their imaginations to bear on the theme of faith in twenty-five stories and poems that will delight and confound readers.

Editor Jerome Stueart opens Wrestling with Gods in his Foreword with a wide-eyed memoir of his childhood instruction at Sunday school, capturing the wonder Christian children feel as they hear the amazing tales of miracles, great wanderings, and faithful individuals saved from dire fates by their faith. He mentions the great stories of Buddhism, Islam and Hinduism, and their “fantastical elements” – stories that helped establish the values these cultures would live by for millennia. He connects his love for science fiction and fantasy to these early stories that fired his imagination. Stueart concludes by showing us how fantasy and science fiction have renewed his belief that life could certainly be more interesting than the “practical world” in which he has ended up as an adult Christian.

Among the twenty-five explorations of faith in Wrestling with Gods:

Derwin Mak, Prix Aurora Award winner, tells in “Mecha-Jesus” of an android Christ, the highlight of a Christ Festival in a small Japanese village, whose inhabitants have little or no understanding of the basic tenets of Christianity. The Vatican then sends an “expert” in both Christianity and robotics to determine if this android truly is the “second coming of Christ.”

Robert Sawyer, co-founder of the multifaith television network Vision TV, brings us “Come All Ye Faithful,” in which he describes the dilemma of a Roman Catholic priest in the wholly secular Bradbury Colony on Mars, upon hearing an eyewitness account of an apparition of the Virgin Mary on the red planet.

S.L. Nickerson, a Ph.D candidate in astrophysics, steps back into pre-scientific times with “The Queen in the Poplar Forest.” On the hunt for the legendary Bronze-Backed Bear, the queen meets Leinu, a wild man of the forest, who shows her how to value nature instead of seeking to conquer it.

Janet K. Nicolson’s story, “A Cut and a Prayer,” explores the technological methods to which a woman is willing to turn to deepen her faith in Allah.

Tony Pi’s poem, “A Hex, with Bees” describes a deeply spiritual ceremony of worshipping bees, in order to protect the land from rapacious loggers and other environmental predators.

In “Burnt Offerings,” Mary Pletsch delves into the dark side of faith: the physical suffering and sacrifice deemed necessary in times past to achieve great goals in the name of religion.

Jennifer Rahn’s “Ascension” interprets the theme of Tesseracts Eighteen literally: her protagonist must wrestle his opponents to earn a Buddhist reincarnation.

John Bell reaches into Canadian history to share with us a “found poem”, detailing a spiritual vision experienced by the Reverend Henry Alline of Nova Scotia, in the late 1760s.

A coffee shop server gets much more than she bargained for when, in the midst of a frigid Canadian winter, she summons an ancient Egyptian deity to bring back a little warmth in Carla Rogers’ gently humorous “Summon the Sun.”

Erling Friis-Baastad takes us to “Exoplanet IV” to learn how its original inhabitants will view the humans who attempt to settle there – the ultimate exercise in optimism and belief.

Fifteen other stories and poems will rivet you and leave you astounded at the depth of imagination and feeling that can create such witnessing to faith.

Editor Liana Kerzner’s Afterword wraps up Wrestling with Gods, reminding us that religion came about in ancient times as a means to understand “the ‘why?’ of the world”, and that in today’s secular societies, guiding us through the ‘why?’ of the many questions about life that bewilder us remains its major function. She also praises all the authors who participated, many of whom challenged themselves and their own beliefs, as well as those of their readers, with their stories.

Wrestling with Gods stands as a splendid tribute to the thirtieth anniversary of Tesseracts, the legendary Canadian-written, edited and published series of speculative fiction stories. Enjoy these intense tales a few at a time, or immerse yourself in the collection from start to finish. Be sure to turn off your phone…

Liana Kerzner is a television producer and writer, whose weekly radio show, “Liana K’s Geek Download,” is presented on Canada’s Top 20, an internationally syndicated broadcast. Her love for SF and fantasy is manifested in reviewing video games and costuming for conventions. Liana lives, works and presents the annual Futurecon science fiction convention in Toronto, Ontario.

Jerome Stueart is a teacher of creative writing, and runs a workshop called “Writing Faith”. He has been published in many anthologies and collections, including three of the previous Tesseracts series. He makes his home in Canada’s Yukon Territory.