Fans of original storytelling targeted for the young adult audiences will be impressed with emergence of author Lauren Roy and her soon to be released fantasy book, The Fire Children. 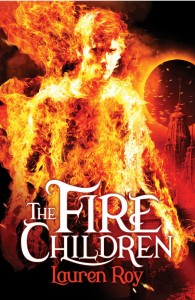 Fans of original storytelling targeted for the young adult audiences will be impressed with the emergence of author Lauren Roy and her soon to be released fantasy book, The Fire Children. There is nothing rehashed from other works in the genre here, a refreshing change from the norm we’ve grown so used to.

Published by Ravenstone (imprint of Rebellion Publishing), The Fire Children will be available in paperback and eBook format in the UK on June 18th 2015 and in the US on June 30th 2015.

The story does use conventional character traits popular with today’s young readers – because it is important for the demographic to feel some kind of a connection. Many of the social expectations found in literature like sibling rivalries and an inherent resentment toward tradition and authority are classic elements that can comfortably fit almost any setting, fictional or not. So even in a fantasy world, growing up can still be hard. But this is where Roy takes readers in an entirely new direction with a creative fantasy world of mythological proportions and characters who are as vibrant as they are believable.

And what a world it is. Having been born during the last eclipse known as the Scorching Days, the storied events of Fifteen year old Yulla’s near death experience has become legendary amongst others her age. But sometimes, that thin line between legend and notoriety can be blurred.

In what seems to be a celebration of tradition following an age old lore, the entire village calmly goes underground for the duration of the latest eclipse. It is supposed to be a time when Mother Sun and her flaming children come out and brand the land with their fiery touch. But when young Yulla is humiliated by her older sister Kell, she ventures off in despair and soon discovers the dark world above is not what they believed and the real evil comes from within their own community.

Roy’s knack for presenting fiery children in such a natural believable state is both artistic and poetic. Just when you begin to question an aspect like getting too close to one or touching such a character, it is quickly dismissed with a casual explanation – a wave of the hand like a Jedi telling the reader to move along. These gestures are so subtle, readers are allowed to soak in the magic and appreciate the romantic story hidden in the chaos. We believe, so we move along.

From a tension standpoint, Roy does a masterful job of describing the total darkness the characters experience in the caverns below the city. As other senses sharpen to compensate for the temporary loss of sight, readers can feel the fibers of the guide ropes, taste and smell the foods, and hear the laughter of celebration. The suspense stemming from the mystery of the Fire Children and the well-conceived characters is what drives this complex plot, but the unique ability to draw the readers into darkness is worth the price of admission alone.

The Fire Children by Lauren Roy is presented as a young adult fantasy, but it is sure to appeal to many others outside the marketed audience as well. This imaginative world is loaded with colorful characters, well-staged action, and a lot of fresh magic reminiscent of material found in classic folklore. But this story is new, fresh – and highly recommended.

You’ve Never Heard of the Hugo Awards Before? Oh My….

Wagers’ first trilogy is one of the most entertaining and engaging space operas that I’ve ever read, and the second bids fair to build on that

The Orville: Thoughts On Meta Humor