Home Art Pictures of the Moon

I’m on vacation. I have a week off work and the sun is shining and I want to get outside. I don’t want to talk about sad puppies or rabid puppies. Sad puppies just need love. Rabid puppies need to be put down. End of story. Let’s move on.

Let’s look at some pictures of the Moon. 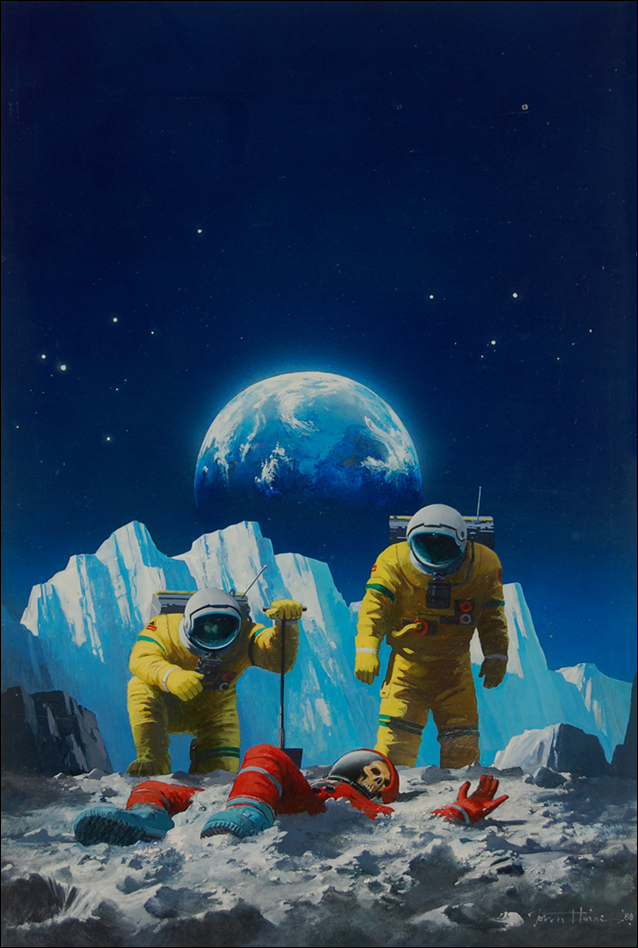 Here’s a John Harris painting from 1989. Harris is best known for painting massive ships floating majestically in a multicolored space, but this is a rare painting of astronauts. Two astronauts in yellow who have come across another astronaut in red. The red astronaut is half buried and is quite dead. Dead for some time, obviously (50,000 years as it turns out) as his skeletal remains attest.

It’s an interesting picture with some unsuual but bold color choices and a blocky composition, but the transition from grey to red to yellow to ice blue and then the deep blue of space gives it a real impact on the viewer. You feel like you’ve really been taken somewhere.

The painting is an illustration for an edition of James. P. Hogan’s 1977 novel Inherit the Stars, the first in his Giants series. It’s had a few editions and a few different covers. Here’s another one: 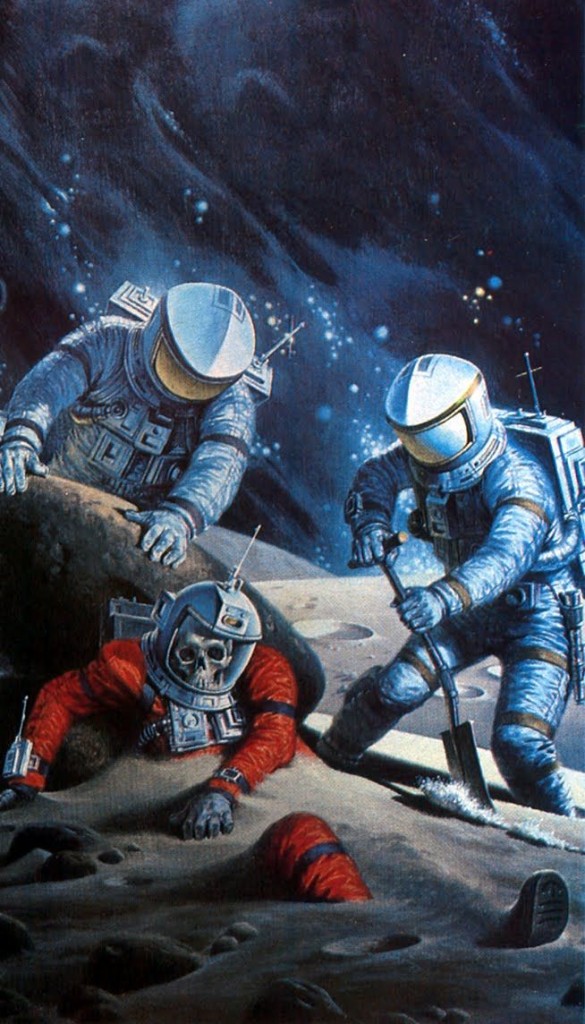 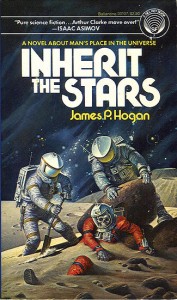 This one is by Darrell K. Sweet for the Del Rey edition. It depicts the same scene as the Harris painting does, but in a completely different way. Sweet’s version, with its heavy use of blues and the swirling patterns in the space background, gives the tableau a more unsettling feeling. The active pose of the corpse lends to the creepy factor as well. It looks as though the hapless astronaut has been frozen in his last desperate moments. It looks as though Sweet’s Skeleton astronaut could suddenly come to life and try to dig himself out.

I need to point out that this image is very tightly cropped. A fuller version can be seen in an image of the paperback cover. It is also interesting to note that the image on the paperback cover is flipped horizontally. I’m not sure which way the original painting was oriented but it is interesting to see how the image has a subtly different impact when it is flipped.

Let’s go back in time. Let’s go back to 1926. From the hard science fiction of James P. Hogan let’s take a look at the planetary romances of Edgar Rice Burroughs. Let’s stay on the moon, though. The moon is fun, particularly if you don’t need a spacesuit and can ride a centaur. 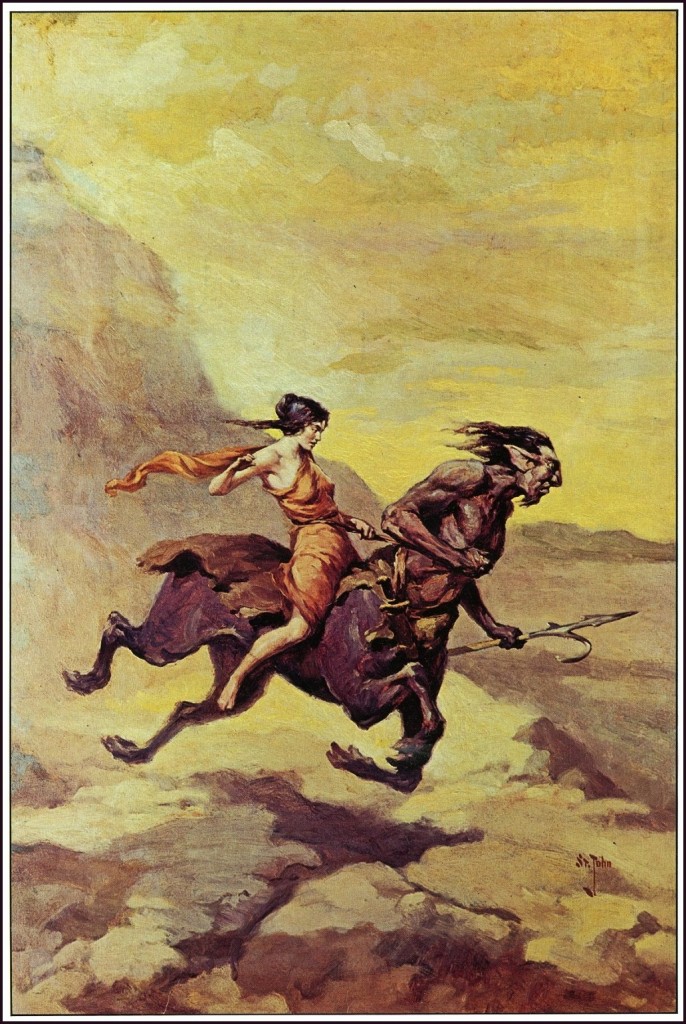 Edgar Rice Burroughs’ The Moon Maid first appeared in hardback with the dust jacket cover painted by legendary illustrator J. Allen St. John. It depicts the title character, the moon maid herself, riding over the surface of the moon on the back of a black skinned centaur creature. Excitement and planetary romance all bundled together in one exciting image.

Let’s fast forward to 1962 when Ace Books put out a mass market paperback edition. At the time there was no better artist to do this book justice than Roy G. Krenkel. Krenkel’s cover depicts the exact same image, the moon maid herself riding on the back of a black skinned cantaur creature. 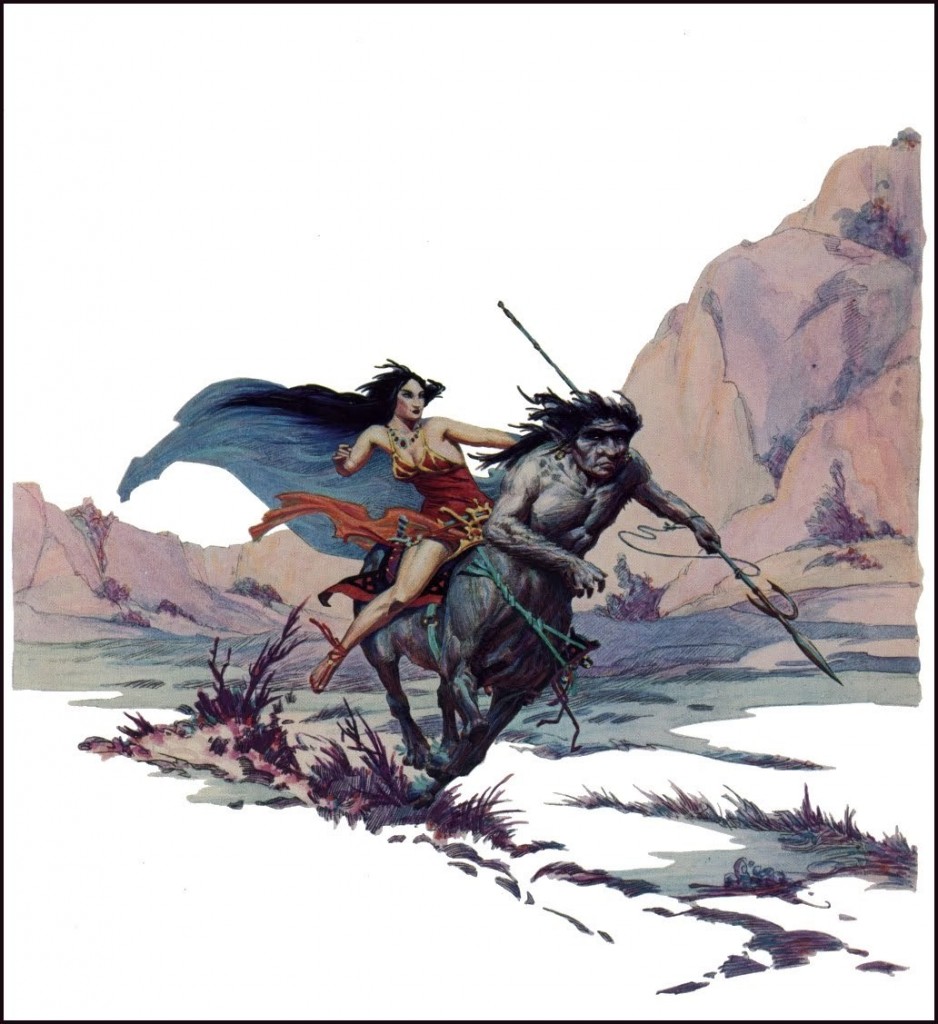 Krenkel changes the angle, gives it more flow, more punch. The centaur seems to be riding right towards the viewer. Krenkel depicts the same things that St. John does, but gives it his own stamp, his own signature.

But Ace isn’t done. In the late 1970’s Ace re-released all the Burroughs’ books and this time they have Frank Frazetta contracted to do covers. They tell Frank to go to town and he does. 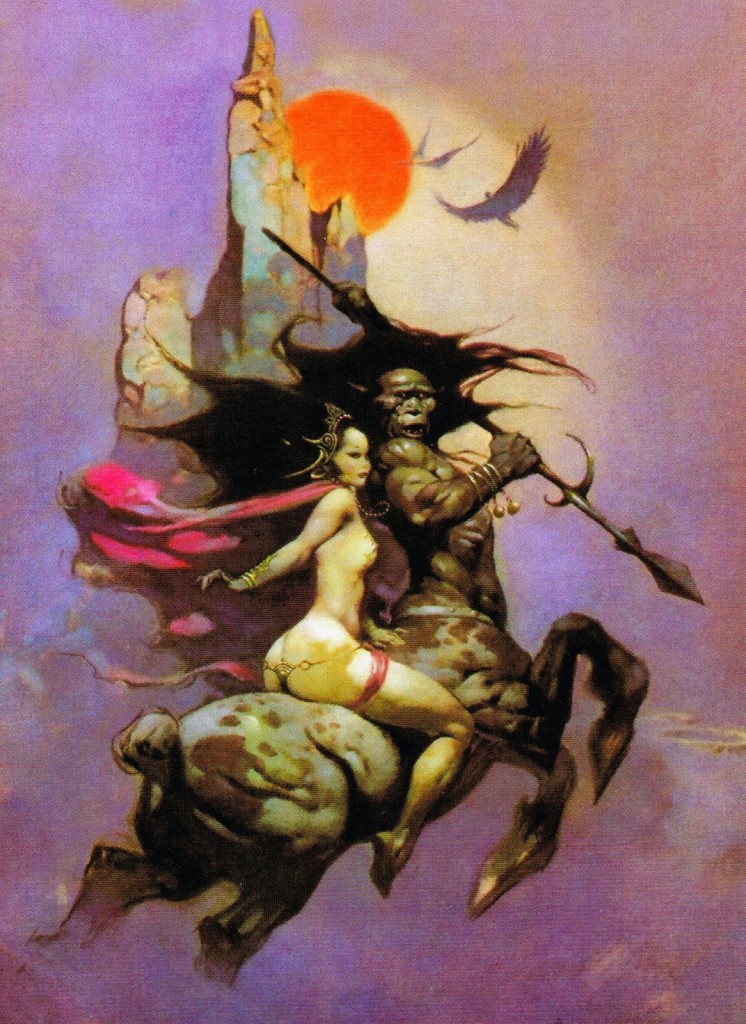 Same picture… same mood maid riding a black skinned centaur… but what a difference! Frank has the centaur heading away from us but he turns the figures to look back at the viewer as if to say “Come with us!” Frazetta’s painting is an invitation, one that few could pass up.

But Frank wasn’t finished. Later on he tries it again. 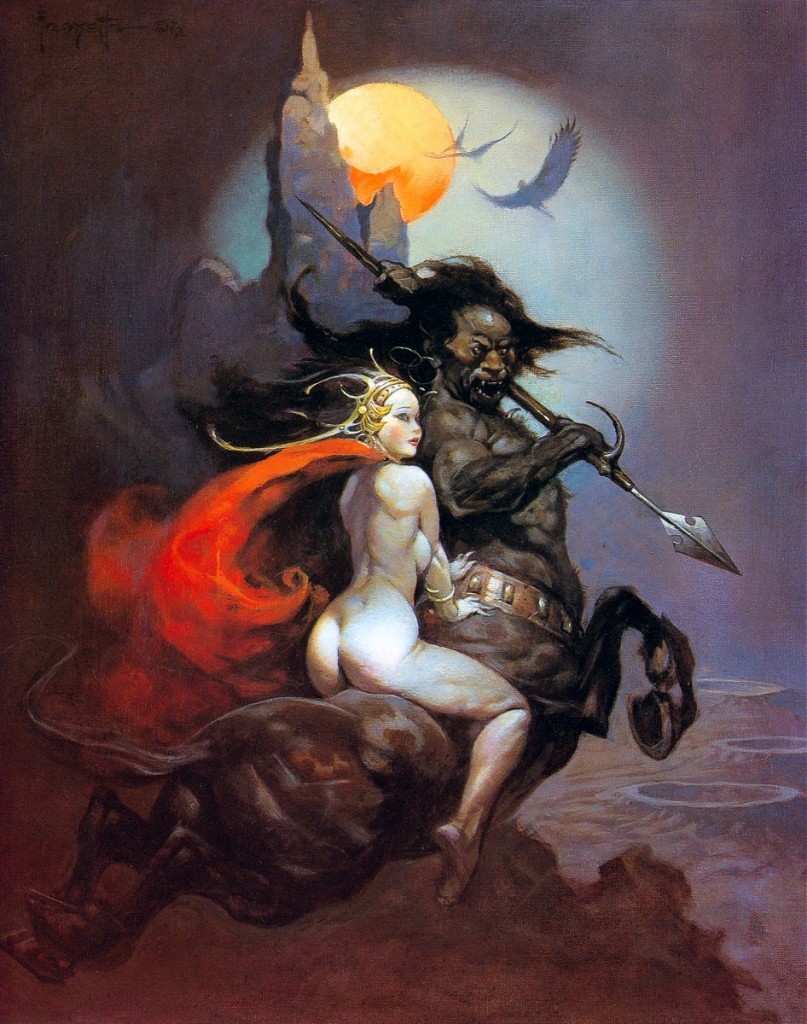 Same composition but… somehow he finds more out of this image. And this is now an iconic Frazetta painting. You may not know Edgar Rice Burroughs or The Moon Maid, but you know this image. It has been seared into the public conscioussness.

You know what? There’s lots more to talk about on this topic but, honestly, I’m tired of the moon. Outside, here on Earth, the sun is still shining and I want to get out and play. Hope you enjoyed looking at these pictures. I’ll have more next week.