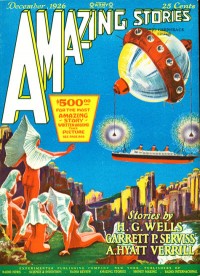 He frequently employed them as both marketing and recruitment tools.  He held story contests to develop new writers (his first such contest, announced at the end of 1926, produced the first female byline in the genre – Clare Winger Harris’ The Fate of the Poseidonia – read it here), to design a symbol for science fiction, to name a feature, to be the first member of the Science Fiction League…. 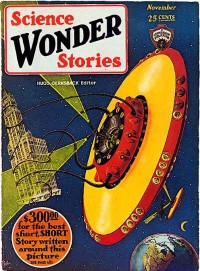 These contests served him well; writing contests grew the ranks of newly published SF authors (and had a long tail; many unsuccessful entrants would continue their efforts).  They lent the new genre a lively, active appearance and they formed the foundation of fandom’s legendary participatory nature.  Not only could you win some cash, issues of the magazine and your name in (figurative) lights, but contestants also contributed to the development of the genre community – earning ‘degrees’ in scienctifiction knowledge (inspiring others to do the same), – envisioning the look of the genre (A Symbol for Scientifiction), and establishing the connection between far-out, gosh-wow artwork and some pretty darned creative and interesting fiction. 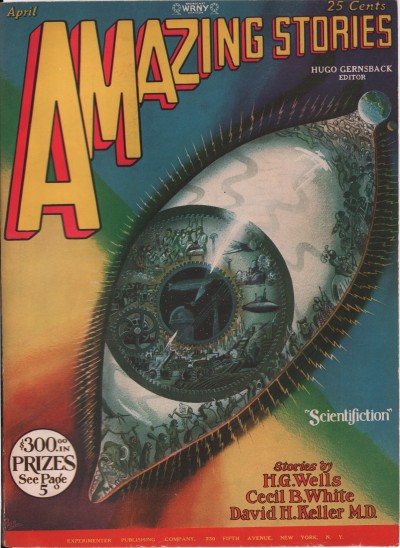 Now we’re replicating what good ol’ Unca Hugo used to do, and for much the same reasons;  to publicize, to recruit and to give away some cash.

We’re starting small.  Our prize package would be described above as “Over $300 in PRIZES” and we’re limiting stories to 2,000 words in length, only accepting up to 100 entries and only accepting them for a single month

Length is not the important thing however.  Approach is.

The contest is being supported by generous backers who believe that there is a future for Amazing Stories.

Just as we believe there is a future for science fiction that promotes a positive future (which we hope is a self-fulfilling SF prophecy!).

Great things are happening in private aerospace space;  two private companies have begun programs to supply the ISS; several others are building the components for the exploration of Mars; rockets landing under rocket power are being tested on landing pads floating in the ocean; despite recent setbacks, space tourism is coming soon and there’s talk of hotels in space, mining the asteroids, building a space elevator and the possibility of testing an FTL drive is not that far off.

Given a couple of centuries, what will all that lead to?  Will we have found life beneath the ice on Europa (cue 2010…)?  Will we have thriving communities on the Moon, Mars and orbiting in the LaGrange points?  Will our worldwide economy have collapsed and been rebuilt following the introduction of unlimited resources in the form of harvested asteroids?  Will humankind have touched all of the planets and be on its way to the Oort Cloud?  The Kuiper Belt?  Will a generation ship be on its way to Alpha Centaurus, or perhaps a nearby red dwarf?  Will we finally have solved the fusion problem?  Hunger?  Over-population?  Will there be a one-world government?  Will we have found messages from alien civilizations?  Will robots walk and talk among us?  Will we have triumphed over an inimical AI?

Robert A. Heinlein wrote a short story about the future that starts with a quotation from a headstone. Talk about depressing finality!  The story is Requiem.

Requiem exemplifies the ways in which science fiction can treat with all manner of negative subjects while still presenting a positive, alluring future.  Requiem‘s main character – D. D. Harriman – spends his adulthood, his fortune and ultimately his life reaching for the stars.

The journey is worth the sacrifice.  The future Harriman creates through will power alone is the kind of future that has been envisioned through science fiction for decades.  We’re all the beneficiaries of science fiction’s imagination made real through the force of will power.  Lets start giving future generations some positive visions to work on.

A special dystopian fiction magazine issue and a micro-story contest

Report on the “Science Fiction” Workshop at Fudan University