Sometimes the medium the message is delivered through can drastically alter the experience. 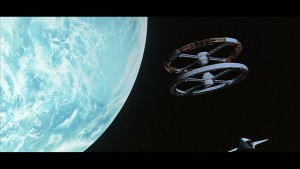 I remember very well how I responded to seeing 2001: A Space Odyssey for the first time, more than thirty years ago.

My reaction was one of devastated disappointment.

I was fourteen and was well aware of the film’s reputation as a landmark of SF cinema – and as a landmark of any kind cinema, come to that. So how come it seemed so slow and so uninvolving?

Today, I know of one factor that played a large part in my disappointment: television.

The BBC was giving 2001 its belated first airing on British television, and the film was not suited to the small screen. What’s more, the BBC had decided to ‘letterbox’ the space sequences – but, bafflingly, they had decided to fill the black bars above and below the widscreen picture with their own superimposed star fields. Many viewers, unaccustomed to letterboxing of any kind, must have wondered what on Earth the film-makers had been up to.

Years later, I saw 2001 on a big screen, and the experience was very different. A couple of years ago, at the invitation of Amazing blogger Gary Dalkin, I saw it at London’s Royal Festival Hall, with a live orchestra and choir, and it was even better.

On TV, the pace seems excruciatingly slow. When astronaut Dave Bowman dismantles the memory of the malfunctioning computer HAL-9000, the whole procedure seems so drawn-out that I was practically yelling at him to just take an axe to it. On a big screen, the sequence is completely different, almost chilling in its intensity. As for the climactic ‘light show”, it’s a sequence that depends on the viewer sitting in front of as big a screen as possible, engulfed by the sights and sounds.

Another example of a film that loses practically all its impact on a small screen, for me, is Alien. When I saw it on videotape, it again seemed inordinately slow. On a big screen, it is claustrophobic, unsettling, and in the last reels very tense.

In another genre, there’s The Exorcist. I was guilty of deriding it when I saw it in video. When it was revived on the big screen, I watched the film literally scare people out of the cinema.

You might say that any movie-watching experience is going to be more intense in a darkened auditorium. But some movies – the ones most preoccupied with plot and suspense – can be appreciated in any medium. Star Wars and Forbidden Planet lose a lot on TV, but are still enjoyable. But with the movies I mentioned above, there’s no point in bothering.

The difference, by the way, is not just about big budgets and spectacle. I also found The Texas Chainsaw Massacre, a film with decidedly low production values, was a hugely more intense experience in a cinema.

Certain kinds of SF and horror, more than most genres, ask us to immerse ourselves in an imagined reality. The more completely we submit to their vision, the more we will get from them. The best genre films are the products of big imaginations and they demand a big investment on our part.

I have a Blu-ray of Interstellar to hand right now. And some time soon, I’ll put it on, draw close to the screen and hope it isn’t another of those movies that should only be seen forty feet wide.

In the spirit of its predecessor, the return of Weirdbook with issue 31 is simply here to entertain us with fresh new “weird” stories from a talented team of writers.

With the Witcher, Andrzej Sapkowski created one of the most memorable characters in modern fantasy.

When Mundanes Do the Stupid…We All Pay the Price