A scary, intense film about love and loss. What’s not genre about that? 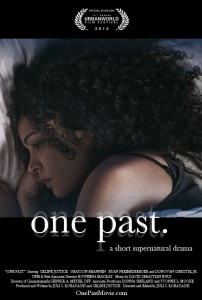 It might not be immediately apparent why I wanted to write about a short film, which isn’t strictly genre, for Amazing Stories.

Well, a bunch of reasons. First, if you want to go down the genre route, One Past is a ghost story­ — of sorts. Second, it begins at least with genre-style drama/horror. But then takes a wholly different, delightfully unexpected path, though there’ no need to cast aside the genre element if you don’t want to.

Charlie Style (Celiné Justice) returns home one evening to find her sister, Lyla (Grayson Brannen), dead on the bathroom floor. Support for her amid the psychic devastation and the grieving process comes from an unlikely source in the form of Lyla herself, who reappears as a ghost, an hallucination or a dream. But their reconnection – at one stage amusingly  involving a truly horrible client, Doug (Ryan Preimesberger, wonderfully nasty in the role) who has asked them to decorate his apartment – isn’t all roses. Unresolved aspects of their relationship, as well as a reaffirmation of their deep love, leads us through the protagonist’s significant life transition.

A film about love, loss and letting go, it manages to be scary, funny, intense, dramatic and mesmerising throughout.

Framed in sequences that would work perfectly as stills photography, with subtle lighting, a mix of hard and soft focus, and perfect editing, it’s as beautiful a film to watch as it is a great story to experience. One Past is a four-hander with terrific performances and a truly tight and engaging script which packs more into 20 minutes than many of the bloated features around these days.

One of my favourite moments is when wannabe boyfriend Rafael (Donovan Christie, Jr.) persuades Charlie to stand up and sing, exploring a wish that she’d put on hold for the sake of her sister’s ambitions. She gives a great rendition of the Billie Holliday song, Willow Weep for Me, and retains something of Holliday’s strength and fragility while also making the song entirely her own. I gather from the director that Celine doesn’t see herself as a singer and that she referenced Holliday’s version for tone, but based on what I heard I’d say she should definitely be making records, or at least doing gigs.

One Past achieves what too few films in genre, or the trappings of genre, do, which is to explore the human condition through rich layers of character and emotion. All in 20 minutes yet. The film is directed by Juli S. Kobayashi and co-written by Juli and Celiné Justice. Juli and her team are definitely people to watch out for. I would certainly want to see a full feature and I predict great things in the future for these talented film-makers.

Finally, do I think science fiction fans will enjoy One Past? You bet. As well as everyone else who sees it – and I hope they do so in huge numbers. And, if you’re in NYC this May you can be among the first to see a theater screening in NYC (details below).

In this week’s viewing: Miraculous recoveries are everywhere, including two major characters and Aldnoah Zero’s writing!

The Dangers of Crosstime Travel

The Artful Collector: REAL Questions and Answers from a Dealer’s Archive – Just One Example

I Dreamed I Saw the Silver Spaceships