In this week’s viewing: The Heroic Legend of Arslan and Mikagura School Suite have finally gathered their core groups, and more! 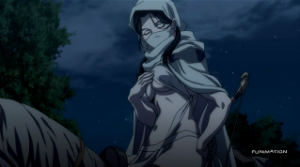 The Heroic Legend of Arslan #8 – And so the heroism begins! Or at least edges closer to having a chance to happen! Well, at least Arslan is out of the cave and getting a chance to mow down some cannon fodder.

But when it comes time for the named characters to go at it, he’s still a spectator. The best fighter in the kingdom is needed to bring Kharlan to heel without harming him, so that they can… whoops, that didn’t work out, did it? Kharlan only manages to gasp out one cryptic clue, but Narsus will probably take that and bring Arslan up to speed with what the viewers know by now.

Which is that Andragoras’s brother had a son, who was clearly supposed to have died but didn’t, which means the business with the two brothers allegedly falling out over Tahamenay is more important than it first sounded. It also means that Hermes’s grand evil plan is to take Pars for himself, after somehow disposing of Innocentis and Guiscard. Perhaps Tahamenay is part of that plan, but he’s also going to have to do something about that foreign army occupying his kingdom. 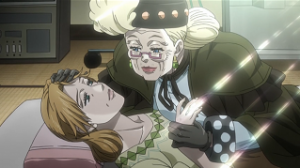 JoJo’s Bizarre Adventure: Stardust Crusaders #44 – The three parts of this episode were probably separate manga chapters and worked fine that way, but the tonal whiplash caused by forcing them together isn’t kind to any of them.

First we have the grim conclusion of the battle with Vanilla Ice. On top of what Polnareff did to him last time, it turns out he was already mortally wounded when Avdol surprised him (well, good, and I hope he gave your Stand indigestion, too, you bastard). Polnareff, not the sharpest tool in the box, finally realizes that this means he’s fighting a vampire, and it’s simply a matter of luring him unprotected into sunlight. Of course, the sun is now setting, so no such luck for the confrontation with Dio…

Part 2 is an interlude with Grandma Suzie arriving in Japan, being an idiot tourist, and then proving once again that she is much more intelligent than her family and staff give her credit for. Really, everyone needs to just accept that she’s one sharp lady and level with her.

Then, from comedy-drama, the episode swerves into macho comedy with Nukesaku (“Blockhead”) the useless vampire henchman. Nukesaku is pressed into service as a guide, even though with the maze gone, everyone should know that they just have to keep going up the stairs to get to Dio. I guess he was thrown in to provide one last light moment before the final confrontation. 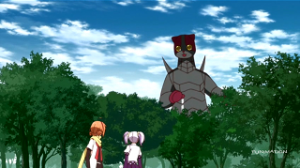 Mikagura School Suite #8 – It’s just another ordinary day at Mikagura Academy, which means Eruna being mildly creepy but yet effortlessly warming the hearts of whoever interests her this week in this case Otone. But then, a few minutes from the end, the show suddenly perks up and remembers it’s supposed to be about something. Like, a plot! And characters who seem to be alive! And drama! And what it needs to goose itself back into motion is… Mechagodzilla Bimii!

All of a sudden, Eruna looks like she has a new crush and Seisa is feeling bereft. Even the end credits are losing interest in her. Eruna has also finally dropped the idea of a club to form her own personal harem, and instead is going to build something with Otone, it seems. Does this get her kicked out of Seisa’s house? Will that spark the interest of the journalism club and pull them into a larger role in the story?

On Politics and Fandom

Review: Naomi’s Room & The Silence of Ghosts, by Jonathan Aycliffe

Interstellar my be visually stunning, but it does have a scientific fatal flaw