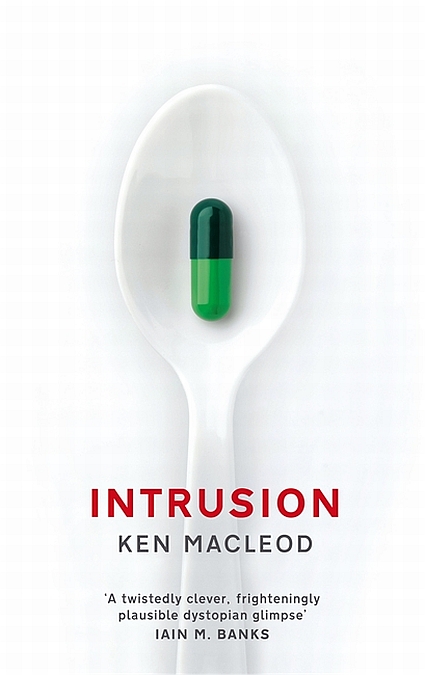 Intrusion is a novel, published in 2012, by Scotland’s preeminent writer of serious hard SF. It was nominated for both of the UK’s top science fiction awards, the British Science Fiction Association Award and the Arthur C. Clarke Award.

Some decades from now, Hope Morrison is a young woman living in London with her husband, Hugh, and four year old son, Nick. Health & Safety laws have driven most women from the workplace, so Hope works from home answering inquiries, translated into English, for a Chinese website. Solar panel farms in Africa have ended Hugh’s first career as a wind power engineer – his father Nigel works on the Isle of Lewis, dismantling the giant wind turbines installed a generation earlier – leaving Nick an expert carpenter labouring with genetically engineered New Wood. The combination of next generation renewable energy sources and New Trees draining carbon from the atmosphere has global warming on the retreat. London is suffering a series of unusually cold springs, implicitly the result of the collapse of the Humbolt current. The Warm War against Russia and India is white noise, Naxal terrorism and the security response to it taken as a given, if considered at all.

Recently introduced, The Fix is a pill designed to be taken once during pregnancy. Without side effects, it repairs many common genetic defects in unborn babies. It is not technically illegal to decline The Fix, though conscience exemptions on grounds of religious belief were written into the original legislation on the supposition that it would eventually become compulsory.
Shortly after Hope finds she is expecting her second child, a legal ruling in a case between an atheist couple in which the husband (who wants his wife to take The Fix) and wife (who doesn’t) finds in favour of the husband – setting a precedent which will make it illegal to have a ‘Nature Kid’ rather than a ‘Faith Kid’ or a ‘New Kid’. Hope decides she doesn’t want to take The Fix, and as a matter of conscience refuses the easy option of a faith exemption – as a person without a faith she will not stoop to hypocrisy to satisfy the law. Further, Hope will not justify her decision, indeed she is uncertain herself of her motivations. She simply believes it is her right not to take The Fix, and equally her right not to have to explain that decision to anyone else, much less justify it.

Thus while Intrusion is on one level about The Fix, it is much more about the asymmetric conflict between personal conscience and rights of the individual against the power of the state. The Labour Party is in power and Hope joins in an attempt to win the support of her MP, the aptly named Jack Crow. Yet the state is not actually particularly concerned if pregnant women take The Fix. It has, after all, allowed faith exemptions. What concerns the state is conformity to the system, being free to opt out within rules it defines. What is intolerable is that Hope refuses to go along with the velvet glove system which encompasses not only its own academic critique, but 24 hour surveillance of the streets, workplace, home and body. The State may allow a wide latitude of freedom – police torture comes with strict rules and free trauma counselling, travel is unrestricted because they always know where you are – but on its terms.

Jack Crow cites the example of conscientious objectors during the world wars, arguing that those who objected always had to give reasons to prove they were genuine, not just cowards. Otherwise anyone could opt out of any law they didn’t like. The result would be chaos.There are subplots involving a researcher, Geena, who tries to help Hope but inadvertently makes things worse. A further thread involves Hugh’s apparent second sight. The various strands come together in complex, resonant ways. There are some good jokes, from the writerly amusement at a sign advertising’ vegan filled bread rolls’ to Nineteen Eighty-Four becoming a compulsory school text with a sanctioned official reading. Intrusion is a novel rich with ironies, from the literal-mindedness of a legal system which works against its own goals, to the bitter truth that the only terrorism in the narrative is carried out by the state to its own paranoid, self-destructive ends.

War on Terror legislation collides with ‘health and safety gone madTM’ rules, resulting in a well ordered British police state, all to the benefit of the citizen. In acknowledging the nonsense of the idea of the free market, Jack Crow explains that in a true free market everyone would have perfect knowledge, so as to be able to make the best decisions. As people don’t have that knowledge, the next best thing is for the state to make those decisions (because it has more knowledge, because it monitors everything) with everyone’s best interests at heart. From planting evidence to ‘enhanced interrogation’ it’s all for your own good, and automatic computer systems can flag you as a potentially unsuitable parent, or even a terrorist, because someone else made a phone call, or you delivered a letter by hand. Alice hasn’t gone through the looking glass, she’s living in London.

Intrusion is the most gripping book by Ken MacLeod I have read. It offers much to think about and plenty of wonderfully involuted irony. Despite spending much of its time in the capital, it is a very Scottish book. The scenes on Lewis have a freshness the ticking-off of London road names doesn’t manage to evoke. There is a strong sense of people getting by and living their lives in difficult circumstances. There is not the action of some of the author’s earlier books, but nor is it weighed down by long passages of political and fractional debate and intrigue. Here the politics is personal and the people real. Intrusion is not perfect, but because the main flaws lie with the ending it is impossible for me to say more without spoiling the entire book. Suffice to say that after considerable excitement the resolution is ingenious, splendidly ironic – that word again – but perhaps too whimsical and lightly won. Then again, this is Britain, land of cosy catastrophes and cosy police states.

an earlier version of this review was published in Vector