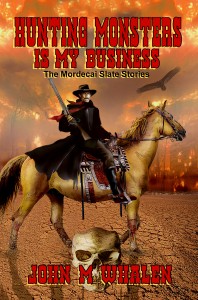 I took a look at the sales rankings for my book, Hunting Monsters Is My Business the morning of April 12 and found it in the #3 spot in the top 100 best-selling Kindle e-books in the horror/western category. It will no doubt have moved from that position by the time this blog appears. The rankings change hourly. And while being #3 in itself is good news, it’s still not #1, but that doesn’t really matter. I figure getting into the top 10 is accomplishment enough for a book self-published by an unknown author who has spent relatively little of his own resources in the process.

Total costs for launching the book include a very reasonable artist’s fee for the fantastic cover, and about $90 to Kindle Direct Publishing to format and publish the Kindle version. I wanted them to do it professionally because I could not take the time and bother to format the table of contents with links to each of the individual stories in the book. I formatted and published the paperback version myself. I haven’t paid a single dime beyond that. A couple of hundred dollars total.

I’ve spent no money at all on publicity. Aside from great reviews in Amazing Stories, pulpchronicler.com, and Bill Crider’s Pop Culture Magazine, and brief mentions of its availability here and there on various author websites, there has been little publicity about the book. Even more surprising, after being available for almost five months, there are still NO Amazon Customer reviews. This is an interesting fact, and raises the question: How is the book selling as well as it is?

First of all, let’s be clear. When I say it’s in the Amazon Kindle best seller list at #3 that is not the same thing as saying it’s No. 3 on the New York Times Best Sellers list. The actual number of books bought and sold is very small compared to books on the national best sellers list. Weird westerns like “Hunting Monsters Is My Business” fall into a very small niche in the publishing world. Only a handful of them get published, most of them by small independent publishers.

I’ve published the two Mordecai Slate books under my own Flying W Press logo. I had 30 years experience as a journalist and editor. I helped turn out a weekly journal using what eventually evolved into desk-top publishing, so I think I can  say I brought some professional level skills to the task. I try to make the books as professional-looking as I can.

at Rio Muerto” will continue to be successful. I hope it will be for a long time. But not just because I want to make money. The royalties so far have better than covered my expenses, but I won’t be going out to buy a Range Rover with them. That isn’t the point. It wasn’t the point when I decided to start Flying W Press in the first place. All I wanted to do was see if it was possible for a writer– one person with limited contacts and resources and very few friends in the fiction business–  could write, publish and sell his own material. The answer is he can. And that’s why I’m writing this blog. Not to brag, but to let others like me– men and women with the desire to write and be published– know it can be done.

The publishing world is undergoing a revolution. The rise of small independent presses in general has been a good thing.  A small press is a good place for new writers to start. The editors at these presses are looking for new talent all the time. The majority of them are good people and only want your book to succeed. Some aren’t so good. but that’s another blog. Small presses offer you an opportunity to get exposure and I would advise new writers to start there first to get experience and confidence. But even for the good ones, it’s a tough game. Small publishers can go out of business too easily. One of my books, “Jack Brand” is out of print because the publisher just decided to quit for personal reasons.

Also you pay a price in terms of having to share some of the take with these publishers, and there is always the problem of a conflict of view point regarding your work. Nobody understands your work and what you are trying to do as well as you do. And having to deal with requested editorial changes can be a difficult experience.

In terms of a publishing revolution, the growing number of self-publishers is where the action really is.  If you publish yourself whatever money you make after Amazon takes its 30 percent is all yours. And good or bad, whatever you publish is 100 percent your work and not the result of compromises with editors.

There’s no question that doing it yourself involves a lot of hard work. You have three main jobs– jobs that a publisher would probably give to three of four people– editing, formatting and sales promotion. It isn’t easy, sometimes you want to pull your hair out, but if I can do it, anybody can. However , after you’ve done all the work necessary to turn out a good book, the biggest question of all remains: How do you find readers?

Michael J. Sullivan has written some good blogs on Amazing Stories about self-publishing. One of the things he said recently is very true. When it comes to building a fan base you do it one person at a time. Word of mouth is your best sales tool. The way I see it, just as you write stories one word at a time, so you build your readership one reader at a time. You get the word out through facebook, Twitter and blogging, but its up to the individual readers to pick up the book, read it, and then tell others about it. It takes time but, if you’re persistent and believe in what you’re doing, it happens.

I’m looking at the Amazon Top 100 Best Sellers in Horror/Western again. Know who’s currently at #1 on that list? Cormac McCarthy. His novel “Blood Meridian” was published by Random House. He’s got an agent, an editor and a publicist. I don’t have any of that and today I’m only two places behind him. I don’t have his sales or royalty checks, of course. Not yet anyway. But who knows what can happen now that the book is out there? Thinking about that is one of the joys of self-publishing.

(Editor’s note:  Unsolicited promotion:  Check out John’s book(s) and think about giving him a boost in the rankings!)