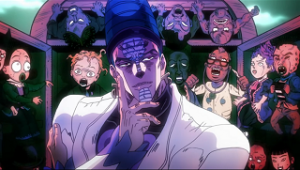 JoJo’s Bizarre Adventure: Stardust Crusaders #40 – Wouldn’t you know it, D’Arby the gambler has an even more powerful, more creepy, and less hipster-like younger brother ready to give our heroes a greater challenge than ever before. And wouldn’t you also know it, just as soon as Kakyōin has healed up enough to rejoin the gang, he finds himself taking point in the latest fight.

And that fight, wow. A couple of guys sitting at a console pushing buttons and trying to work the rules of a game whose rules haven’t even been explained is not necessarily going to be exciting, but it is wonderfully well-executed here. (The graphics feel a bit beyond the reach of a 1989 console, but I’m not going to complain.) It’s a suspenseful, edge-of-the-seat contest of skill and nerves where you never know which player is going to be the first to snap, whip around, and tell Joseph to SHUT THE EFF UP OLD MAN WE ARE TRYING TO PLAY AN EFFING GAME HERE.

The dolls are another high point, if that’s the term I want, animated for maximum squick. All possible kudos to this week’s episode director, Yasufumi Soejima.

Storywise, the best moment is being able to step into Kakyōin’s mind and see the effect of his encounter with Dio. And speaking of that scene, did those rose brambles look awfully familiar? Like, just like Holly’s Stand? Is that actually her Stand, or is it Dio’s power attacking her? 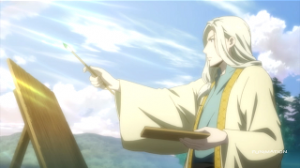 The Heroic Legend of Arslan #4 – Pars has a lot of enemies. Two years before the previous Lusitanian invasion, it was dealing with a coordinated attack from the east. This might be down to it being a generally warlike world where everyone has enough spare resources to be constantly going after each other, or it might be something to do with Andragoras’s much commented-on lack of understanding of anything beyond bashing his enemies’ heads in.

After being totally at the mercy of events so far, Arslan finally gets a chance to shine when he announces what Narsus’s reward will be. It’s both a funny and revealing moment, as he shows that there is some real intelligence taking everything in. But it’s likely that if they all survive this and Arslan makes it onto the throne, the favor Narsus will ask in return is the abolition of slavery. By the time that happens, Arslan may even be ready to acknowledge that it’s the right thing to do.

While Narsus is being set up as the brains of the operation, Daryun gets a chance to show that he’s no fool either when it turns out that he accidentally on purpose took a route that would bring Kharlan’s men onto their trail and force the issue. There are no idiots in this party, and if it stays that way this should turn out to be a very good story indeed. 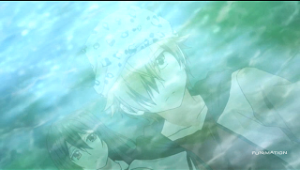 Mikagura School Suite #4 – Drama club is dramatic! In what will probably a weekly theme for a while, Eruna picks another club to hang out with for a limited time and charms them all. This gives us a chance to look at the inner life of club representative Yuto, who has spent years acting day in and day out to cover up his depression after being abandoned by his mother. But after a dose of Eruna and a chance to compare bad coping strategies with Seisa, he’s starting to warm up to the idea that maybe people can actually like him, flaws and all.

Seisa’s advice suggests that she’s repressed something important to her. Is it just that battle she keeps flashing back to, or something bigger? It’s appropriate for someone whose power is to essentially generate a black hole.

Anyone who finds all that insufficiently hyperactive will be jolted awake again for the final sequence as Eruna faces her first rookie tournament battle and regains her mojo. There is probably a clue in there somewhere about what makes her power function. Is it that she has to be having fun? Or she has to be down to one crystal?