The lifespan of a science fiction anthology used to be brutally short; published one year, out of print the next. And with very few exceptions, they never came back from the grave. Fortunately, the recent rise of small press publishing and improvements in printing technology are changing all that. Anthologies are staying in print longer and much to my surprise, some of them are even being resurrected. Case in point, the excellent SF anthology Infinite Jests edited by Robert Silverberg. Originally printed in 1974 by Chilton, the same publisher that gave us such fine car repair manuals as Dune, Infinite Jests was reissued by Wildside Press just a few years ago.

What makes Infinite Jests worth your time, aside from the all-too-rare humor theme, is the consistent high quality of the stories. A quick glance at the authors represented ought to give you some indication of the level of professionalism in the storytelling. Thematically, this anthology leans to the dark side of comedy, with chaos and carnage being quite common. You won’t find much in the way of slapstick or puns. In a few of the stories the humor is slight and heavily dependent on irony. Others are laugh out loud funny. Enjoy.

“Venus and the Seven Sexes” by William Tenn – The Plookhh, a seven gendered species constantly hunted by all the other fierce creatures on Venus, has been promised a cultural emissary from Earth to guide them on the path to civilization. They are hoping for someone who will help them avoid being eaten. What they get is an out-of-favor Hollywood director who teaches them how to make movies. One of many stories that established William Tenn (Philip Klass) as one of the greatest SF humorist of all-time.

“Babel II” by Damon Knight – A birdlike humanoid suddenly appears in the apartment of an artist and through a thought projecting device negotiates a trade for the man’s artwork in exchange for diamonds. Afterward, they toast their new friendship with wine and then make a toast of sorts with something the birdman’s people use for similar intoxicating effect. Then everything goes to hell in a biblical handbasket. Good sense of wonder.

“Useful Phrases for the Tourist” by Joanna Russ – For use when visiting a fictional alien planet. Not a narrative, just a list of phrases in succession. The humor comes from the oddness of the potential situations that you imagine might require such phrases.

“Conversational Mode” by Grahame Leman – A man wakes in a mental hospital being analyzed by a computer program. Crazy and dark, but may come off as dated due to advances in computer technology.

“Heresies of the Huge God” by Brian W. Aldiss – A communique from a church scribe reveals nine hundred years of religious history following the arrival of a continent spanning thing. Dark satire.

“[Now + n], [Now – n]” by Robert Silverberg – A man who can communicate with his self from two days ago and two days into the future uses his power to get rich in the stock market – until a mysterious woman comes into his life. Good story, ironic, but not much in the way of laughs. 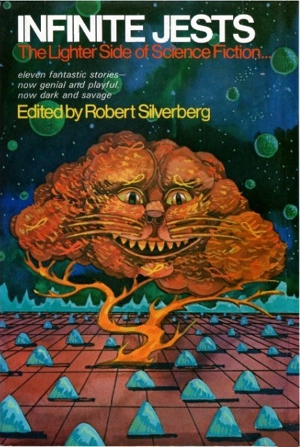 “Slow Tuesday Night” by R. A. Lafferty – Life is ramped up to an insanely fast pace after a mental block is discovered that has been inhibiting the human mind. Biting and funny social satire.

“Help! I Am Dr. Morris Goldpepper” by Avram Davidson – The executive steering committee of the American Dental Association meets in secret to discuss what to do about Dr. Goldpepper, eminent dentist kidnapped by aliens. Great fun, lots of laughs. Possible inspiration for Piers Anthony’s Dr. Dillingham.

“Oh, to Be a Blobel!” by Philip K. Dick – A disturbed veteran of the war against the Blobels (large sentient amoeba on Mars and Titan) consults an electronic analyst. His heroism led to his being asked to be a spy, but to become one he had to transform into a Blobel. Years later he still reverts to this form half the time. Dark comedy with heavy irony.

“Hobson’s Choice” by Alfred Bester – A government statistician in a USA pocked by nuclear war dreams of traveling to other times that would be better suited to him. He discovers a statistical anomaly in the population numbers, investigates and discovers people arriving from the future. Well done dark comedy that shows that the grass is always greener.

“I Plinglot, Who You?” by Frederik Pohl – Claiming that the Alderbaranians want an alliance with earth, an alien in a variety of human disguises plays nuclear powers USA, USSR and France off against each other. Good, but light on humor.

If you are a well-read fan of some of these authors then it is likely you have encountered some of these stories before, so you will have to decide whether Infinite Jests has enough new to you to be worth the expense. If many of these are unfamiliar to you and you enjoy dark comedy, then this is a must. Infinite Jests is available in trade paper from Wildside Press.