Home Review Review – Sanity and the Lady by Brian Aldiss 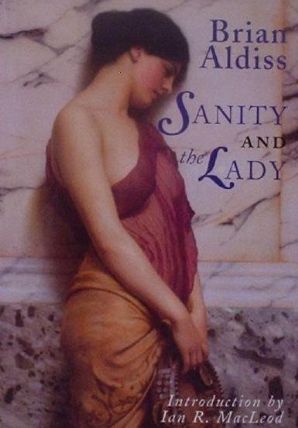 The only thing you can be sure about a Brian Aldiss novel is you can’t be sure of anything; not subject matter, style, quality; I found Cryptozoic brilliant, Barefoot in the Head made my head hurt, and I was bored by perhaps his most mainstream work, the Helliconia series.

Sanity and the Lady (which was published in the UK in 2005 in a beautifully produced, signed, numbered limited edition from PS Publishing) is a slight affair in which world changing events happen almost entirely off-stage while the main story unfolds as an ironic upper middle-class melodrama with a deliberately distanced, theatrical, old fashioned flavour. Brian Aldiss had, at the time of publication, been writing SF for over fifty years, (he turns 90 this August) and it is hard not to see Sanity and the Lady as a mocking rebuttal of the British science fiction of the decade in which he began his career. In Billion Year Spree, Aldiss’ history of science fiction, he dismissed John Wyndham’s work as ‘cosy catastrophe’, and yet here he offers, with tongue almost visibly in cheek, an extremely cosy catastrophe novel, with due nods to Wyndham.

As in The Day of The Triffids and The Kraken Awakes the aliens (variously dubbed The Emperors, Virus X, Functions or Autons) arrive amid lights in the sky, leaving a trail around the globe, though so far as we know none fall to sea. As in Chocky the visitors make contact by entering the minds of selected people around the world, including our protagonist, Laura. We see the unfolding crisis mostly from Laura’s point of view, and to a lesser extent from that of several generations of her family.

The arrival of the aliens happens off stage before the first page, the violent American response also being reported after the fact. Even technological attempts to remove the aliens from their hosts and experiment upon them are barely described. This is a book about Laura, a middle-aged (she appears to be around 40, but her concert pianist grandfather is only in his sixties), lady novelist of some fame, the melodramas in her family and her attempts to understand and protect the alien visitors.

The family material is thin and deliberately flirts with soap opera, albeit the clichés of an earlier generation. The date seems to be the present or the very near future, but no one now lives as one big multi-generational family with a man servant who brings a nice cup of tea and macaroons, speaking as one of my generation imagines people did half-a-century or more ago:

She could have hugged the young man. “Yes, yes, pleased as punch, to be honest.”

“You know Freddie, one has visited me. That’s why I’m here.”

Alongside the family saga Laura engages in a series of interior dialogues with the alien in her head, and each attempts to understand the other. Various eternal questions about the nature of God, life the universe and everything are raised, but nothing is considered with any depth, originality or insight. Meanwhile Laura becomes an advocate for the aliens and travels the world appearing on TV and before assorted governmental boards of enquiry. The resolution of Laura’s personal life is perfunctory and as unconvincing as anything in one of her own, evidentially mediocre, novels. There’s some routine satire of American anti-terrorism policy, including a president whose name begins with B, but it is all as satisfying as taking candy from a baby.

Eventually the threadbare narrative takes a turn into pulp adventure and provides an off-stage world changing finale, capped with a years-after-the-event epilogue and explanation. Its all so calculatedly retro and knowing that I was unable to escape the feeling the author was mocking not only his own tale, characters and handling of them, but also the genre and his readers too. And daring us to notice.

In that John Wyndham’s novels were not all that cosy, Aldiss has written the most comfortable, middle-class, middle-of-the-road, whimsical, genteel catastrophe imaginable. And given that the author is far too experienced and intelligent not to have done this deliberately, I can only in all fairness conclude that was all along his intention. Why is an entirely separate question, the answer to which smacks unpleasantly of biting the hand that reads.

An earlier version of this review appeared in Vector #244