Fandom in Britian carried on during the war years, despite the best efforts of PAPER CONTROL.

(Please note: Zine reviews are normally prepared a week or more in advance of publication of this column and may not necessarily include the latest issue available, but the link to multiple issues given at the bottom of each review probably does.) 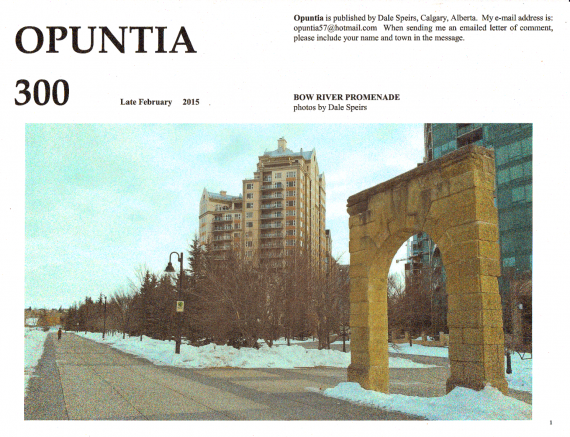 I can’t resist reviewing a 300th issue (which reminds me, 500th issue of BCSFAzine coming up – will review next Friday). Obviously no big deal for Dale, since this issue consists of the usual, namely several high quality images of Calgary and a number of excellent book reviews. No major essay this time, but always thought provoking when there is one.

The arch on the cover, he points out, obviously consists of elements from a demolished building, but there’s no plaque so nobody knows the significance, if any.

Probably the most important article by Dale is about a relatively modern fannish tradition he always promotes (more than once) every year. I quote it in full:

“At 2100h00 local time on June 21, everyone is invited to raise a glass and toast fellow members of the Papernet around the world. It is important to have it exactly at 21h00 your time. The idea is to get a wave of fellowship circling the planet. Rescheduling it to a club meeting or more convenient time negates the idea of a wave of celebration by SF fans and zinesters circling the globe. At 21h00, face to the east and salute those who have already celebrated. Then face north, then south, and toast those in your time zone who are celebrating as you do. Finally, face west and raise a glass to those who will celebrate WWP in the next hour.”

“Raise a glass, publish a one-shot, have a party, or do a mail art project for the WWP. Let me know how you celebrated the day.”

I always mean to celebrate but always forget to mark it on my calendar. Not this time.

Interesting to note that Dale no longer publishes a “Papernet” version due to escalating costs. Me likewise. But we both, like many others, publish our zines online in a format designed to be printed out. Tradition, you see. 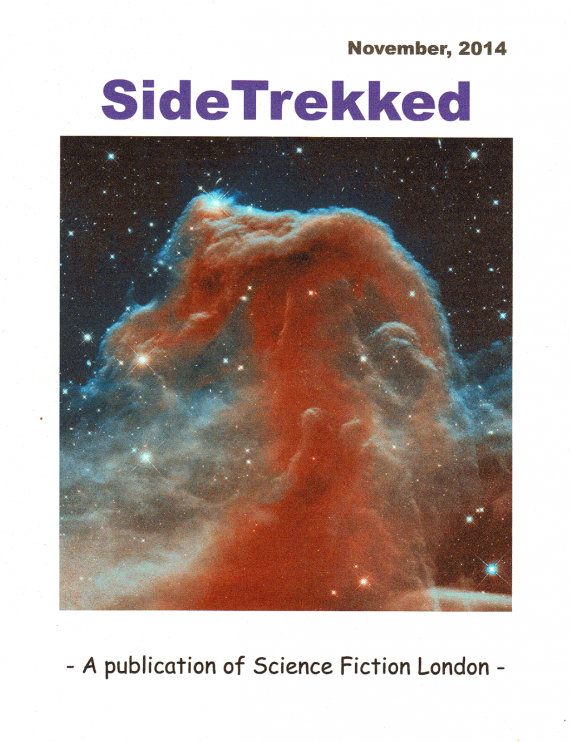 This is a rare bird indeed – a Star Trek zine. Sort of. Or at least I assume it used to be. Perhaps I’m mistaken. “While it is not entirely accurate to describe SF London as a book club (since we do other kinds of meetings), that description is not entirely wrong either, given that most of our topics are books.”

Apparently SF London (London, Ontario, that is) holds highly structured meetings. Twice a year they vote on topics to be discussed in the coming six months, almost always books. They’ve been doing this since 1981. Currently they hold their monthly meetings in a public library. A “presenter” introduces the topic, provides info about the author, and general discussion ensues. Every now and then they have additional outings, like an annual summer barbeque.

Perhaps the club has survived this long precisely because it is highly structured and tightly focused, thus maintaining member’s enthusiasm. My local BCSFA has no structure at all, being more in the nature of a general discussion group. SF London may be on to something here, something worth copying. Hmm.

I wonder if the SF London people are aware there was a much earlier club in town, the Thames SF Society, which started up in 1948 and collapsed in 1950. Probably not. I know nothing about it myself other than it was briefly affiliated with the Canadian Science Fiction Association which lasted only four or five years longer. A bit of trivia for you.

It’s odd that I only recently became aware of SF London despite it having been around over three decades. I gather – perhaps wrongly – that it has always been insular, serving the needs of local fans and having no ambition beyond that, at least not till recently when they began posting Side Trekked online.

Reinhardt Christiansen, the club site manager ( www.sflondon.ca – which I haven’t had time to peruse yet) contributes an interesting (from the perspective of a fan historian like myself) article detailing his forensic investigation into the club’s history in an effort to put together a complete “topics” list of the club. Apparently his starting point was a monograph on the early history of SF London titled “Understanding Reality or Bust” written in 1987 by Joe Belliveau and Rebecca Sense. After that it was a matter of going through assorted personal archives held by individual members.

In my case I inherited an extensive “official” BCSFA archive which nevertheless required considerable cajoling of founding members to turn into something relatively complete. I wonder what the state of archives is like for other clubs these days?

SF London being essentially a book club, there are several good reviews, including one of Canadian astronaut Chris Hadfield’s “An Astronaut’s Guide to Life on Earth.” The book is, of course, typically Canadian. Hadfield several times explains what that means. The reviewer, Jennifer Dowker, quotes a joke Hadfield offers to illustrate his point:

“How do you get 30 drunk Canadians out of a pool? You say ‘Please get out of the pool.’”

Yes, we are a polite bunch, though not always — some of us are real jerks. In general, though, we Canadians are avatars of Perry Como.

Dascha Paylor writes a particularly intriguing article on self-publishing. She has one novel, “The Hundred” so published. She points out that you have to shell out several hundred dollars to get a cover decent enough to attract potential readers, and that many self-published authors spend so much time promoting their latest book they have little time left to write something new. Plus many books are so poorly written and filled with errors that it’s a huge turn off for readers.

A bit of a vicious circle is at play. The huge numbers of self-published books have forced regular publishers to be more selective in order to successfully compete. This in turn causes more writers, especially beginning writers publishers are unwilling to take a chance on, to turn to self-publishing. The moral of the story? Anybody can write. Anybody can publish. Almost no one will earn a living writing. A moral bad for morale.

Side Trekked worth reading? – Yes! It may only come out twice a year (as far as I can tell) but it serves and reflects its member’s interests very well and stands as a good example of a clubzine focused on those interests. A very cozy zine. I enjoyed it.

( Multiple issues of Side Trekked here )

AND FROM THE VAULTS: 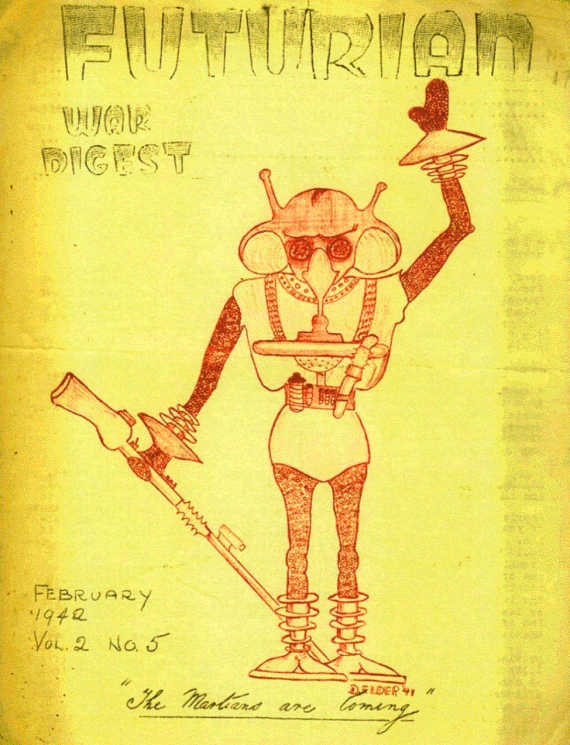 This zine was published during the war. Understandably, paper (which needed to be imported) was rather in poor supply for non-military purposes. Maybe not rationed, but definitely scarce, and subject to the whim of a government office gifted with the somewhat Orwellian title “Paper Control.” Consequently British fanzine publishing basically shuddered to a halt, not least because many fen were old enough to be drafted.

Futurian War Digest was conceived as a kind of centralized publishing house to prevent British fanac (fan activity) from disappearing completely. Numerous British fen contributed articles and/or short fanzines to send out as riders. Several American fans (including Forrest J Ackerman) mailed reams of paper to Rosenblum to help production. It was a remarkable trans-Atlantic collaborative effort which kept British fandom alive. Thirty-nine issues were published between October 1940 and March 1945. It was known as “FIDO” to contemporary fans at the time for reasons unknown to me. Very popular in its day.

I chose this particular issue to review because of its delightful cover (by D. Elder) which is very reminiscent of the classic Martian depicted by Frank R. Paul (who provided the covers for the first 39 issues of Amazing Stories) in various publications from the 1920s into the 1940s. You are looking at an early science fiction icon!

The rationale behind the image, incidentally, was that the thin air of Mars called for large ears and giant lungs (with accompanying huge torso), and the low gravity meant spindly limbs were quite sufficient. This concept makes a lot of sense when you think about it.

The cover, minus text, was printed in the USA and shipped in sufficient numbers for the run of this issue by Forry himself. Dang thoughtful I must say. Rosenblum very pleased.

Another oddity hindering distribution is that the equally Orwellian government entity “Philatelic Export and Import Control” prohibited the importation and exportation of stamps if they were being presented as gifts. I’m sure they had a reason. At any rate, life in the UK well regulated during the war, to put it mildly.

The war looms large in the zine, of course. We learn that fan/authors like Eric Frank Russell and Ken Bulmer have been called up for active duty, that a certain Eric Hopkins home on a week’s leave “says the RAF is very silly,” and that “We learnt with regret of the first rationing casualty, namely, author Maurice Hugi’s Stomach. Gone the sobriquet ‘Tubby,’ [now] there’s room for two ‘Hugis’ inside his suit.”

This possibly to his detriment. Hugi died in 1947. I wonder if rationing (still in effect) hastened his end. Hugi is a very obscure writer today. Apparently he published “Invaders from the Atom” in 1937. Must have been well known to British fandom to be mentioned so familiarly in FIDO.

Forry also sent the “latest Widner Poll.” Art Widner was the most active fan poll taker during the war, and considered the most credible in terms of results (he always disqualified himself). You may be surprised by the low number of participants, but rest assured they consisted of the the most active fen of the day. Winners are listed first, followed by runners-up in descending order. In its entirety, the poll lists:

To those familiar with the names and titles the choices are interesting, to say the least. To those unfamiliar, the titles are evocative of the times, and I bet those of you who are readers recognise most of the authors… I hope.

Other articles (brief articles – everything brief – only 8 pages long) deal with American and British publications both fannish and pro, plus a questionnaire posing questions about the proper role and nature of a proposed UK-wide fan organization.

Futurian War Digest worth reading? Absolutely. It not only captures the flavour of fannish life and interests over sixty years ago, it provides rare details and glimpses of wartime reality in the UK not easily found elsewhere. A treasure trove of minutiae which brings a distant past to life. This is as close to time travel as you can get. Anyone history-minded will find the whole series well worth reading.

You can find a fantastic collection of zines at: Efanzines

You can find yet more zines at: Fanac Fan History Project

You can find a quite good selection of Canadian zines at: Canadian SF Fanzine Archive

Doris Sutherland continues her review of Amazing Stories’ early history. including letter column praise for H.P. Lovecraft’s The Colour Out of Space.

Q&A: Juliet Marillier, Author of ‘The Harp of Kings’