Full disclosure:  the author (Vincent H. O’Neil, creator of the Frank Cole mystery series) traded me a copy of Glory Main for my business card while apologizing that he couldn’t do the same with Glory Main’s sequel.

In my book that’s praise worthy, and worth at least a review.

I’ll confess that my engagement with “military science fiction” has been little to none of late, though I’m well steeped in the classics of this subgenre, having read Heinlein’s Starship Troopers an untold number of times.  The same can be said for Haldeman’s Forever War and Mindbridge and I’ve made my way through Scalzi’s Old Man’s War universe (a handful of re-reads), Steakley’s Armor, a bunch of novels by Pournelle (both Falkenberg’s Legion stories and the Janissaries series, not to mention that novel he did with Niven – The Mote In God’s Eye), Drake’s Hammer’s Slammers and an aborted attempt at Weber’s Harrington series (my initial impression was of an aggressive version of Chandler’s John Grimes in drag…).  Oh, and I almost forgot Bunch & Cole’s Sten series (have to re-read that one soon!).

The boom in Mil-SF though has, in my opinion, seen a shift in focus on the part of many authors of this successful subgenre.  All of the above mentioned have story that takes place in a military setting, while many of the newer crop, based on my first page and back of the book blurb reads seem to place an emphasis on military setting alone.  Maybe that’s just a consequence of marketing hype (if so note to marketing types:, it ain’t working to capture this reader).

So I was of course pleasantly surprised to discover that Mr. O’Neil’s novel put the focus back on story-in-a-military-setting.  (Good thing as I was not looking forward to slogging through endless space battles that resembled WWII dogfights, ground battles that seemed to forget that military tech will continue to evolve even unto the 25th century and the like – and then having to write a review).

Glory Main is the first book in a series called The Sim War.  (Book two is already out – Orphan Brigade.  I’ll be picking it up soon.)  Right from the get-go, author O’Neil reveals his mystery writing chops.  We’re told that the Sims are virtually indistinguishable from humans, except in a couple of respects:  their language sounds like birds chirping (all attempts at translation have failed so far), and their technology lags behind that of the real humans.

We’re quickly brought up to speed:  the war with the Sims has been on-going for centuries; human tech is balanced by the Sims greater numbers (and their inability to have learned the secret of humanity’s FTL tech);  both are fighting over habitable planets everywhere and – humanity is in trouble.  Something called the Emergency Senate ( headed up by our main character’s father) is running the show in human space.

Reading “the Emergency Senate” gave me the same feel that reading Heinlein’s classic “the door dilated” did.  Curiosity about details of this shadowy, seemingly all-powerful political entity dragged me through the novel, hoping for more detail:  was there a revolt?  was human space conflicted with both an external war with the Sims and an internal civil one?  Had things gotten so bad that the military felt it had to seize power?

Setting things up this way is both a great background scene setter and an effective way to drive the narrative.

Insofar as the story goes, it presents itself as a somewhat typical survivors-trying-to-survive-in-a-hostile-alien-environment story.  Jander Mortas, the lead, is a still wet behind the ears LT in the human military ground forces, on his way to pick up his first combat command when everything goes SNAFU & FUBAR;  FTL travel is preceded and followed by STL and therefore passengers (cargo) are placed in suspended animation pods for their journey.  Instead of waking up where intended, Jander finds himself one of only four survivors of an emergency crash landing on a planet unknown.

His unchosen companions are a military psychologist – Captain Amelia Trent, a conscientiously objecting “chartist” (astrogator/cartographer) – Gorman (objecting on religious grounds but in the military nevertheless) and a  Spartacan Scout, Corporal Cranther. Mortas is reminded by Trent that since he represents the highest rank in the combat arms, he’s leading the show – with no supplies, no equipment, no food, no water and no idea of where they are.

The introduction of Cranther, a battle-hardened vet, opens up another mystery;  what are the Spartacan Scouts?  They are obviously a crack, special forces unit, but their recruiting and training methods seem a bit harsh (reminding me of the hints we get from Herbert about his Sardauker Imperial troops).  They’re referred to as “slave soldiers”: in the blurb, and Spartacus was both a gladiator-slave and a soldier.  But if so, what keeps Cranther in the service when he (as we learn) seems to have a great deal of autonomy?

From these bleak beginnings, the group sets out from the wreckage in a simple quest for water and food;  Cranther, Trent and Gorman serve alternately as foils and advisers as Mortas slowly begins to learn the difference between command in training exercises and command in the real world and we, as readers, slowly and steadily learn more about their characters as everyone stumbles across a bleak landscape. 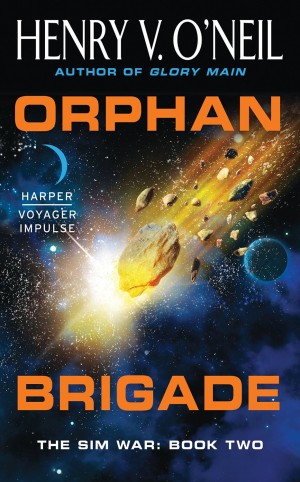 Glory Main would be an astonishingly short novel if the survivors never found water, so it shouldn’t be that great a surprise to learn that eventually they do (and here is where O’Neil begins to demonstrate his planetary romance chops).  They also discover that they are not alone on what had previously been known to be an uninhabited planet.  Their first clue is an empty ration package blowing across their desert landscape.

The gang eventually discovers that the planet is being used as a Sim base and that other human forces have been landed on the surface to assault that base.

Avoiding Sim patrols, hooking up with the other human forces and getting off the planet comprise the remainder of the story, during which we are exposed to some very interesting military technologies;  methods for landing forces on a planet from orbit, weapons that use the ground itself to halt an armored force in its tracks, fiendish area denial weapons.  O’Neil introduces some very realistic elements here as the weaponry portrayed does not always work, or doesn’t always work the way it was designed to.

We’re also treated to some interesting character studies;  Trent, the lone female, seemed to me to be given a bit of short-shrift throughout, as in “typical female psychologist shoved into the military”.,, but this stereotyping is a ruse on the author’s part and the reveal sets us up for the second book in the series.  Gorman is used deftly to illustrate how someone with religious objections to war can nevertheless serve as an effective soldier and Cranther is an enjoyable crusty old salt with a heart of gold.

Henry V. O’Neil’s Glory Main is worth the read;  you’ll see the hand of an accomplished mystery writer woven into the story and it will pull you along.  But be warned – you probably ought to pick up Book 2 of the Sim War at the same time, otherwise you’ll be cursing the delay in finding out what happens next.

Review: In Search of Lost Dragons by Elian Black’Mor and Carine-M

(Whenever you can get Dorsai on the cheap, it’s a bargain!) Night Shade Books today announced that Gordon R. Dickson’s Hugo Award winning tale of interstellar mercenaries – Soldier, Ask Not – is now on sale. Soldier, Ask Not was originally published in 1964 and kicked off Dickson’s Childe Cycle of stories, featuring, among many […]

The Thing. The iconic black and white film from 1951 actually titled The Thing from Another World. Even with all of the name variations and numerous cinematic remakes, to most of us it will was and always will be The Thing. Or was it?

Sneak Peak! Page 10 of A Doctor For the Enterprise

The Artful Collector: What do SF Art Collectors and “Gold Bugs” Have in Common?