Home Fantasy The Greatest Fantasy Novels of All Time Part 2

This week we continue our collection of the greatest fantasy novels of all time. As a reminder, our list is not created from personal preference. We will use objective evidence to select each novel.

The novels in our list do not appear in any particular order. Declaring one novel as the greatest of all time would introduce subjectivity to the list.

Our list began last week with an obvious choice. The Lord of the Rings is the most popular fantasy novel ever written. The novel appears as a trilogy on the shelf but was written by the author as a single story broken into six books. In the 1950s, the publisher understood that a 1200 page novel would be a hard sell. Perhaps if it had been first published in 2015, The Lord of the Rings might have just been the first novel of a decalogy.

This week we will add a novel that is part of a proper trilogy to our list of the greatest fantasy novels of all time. Before we get to the latest entry, let’s look back at our list so far.

The Greatest Fantasy Novels of All Time 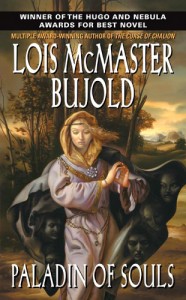 Lois McMaster Bujold is one of the truly great modern science fiction and fantasy authors. Her Curse of Chalion trilogy has received five best novel nominations and four awards.

One of the most delightful aspects of her trilogy is that each novel stands alone. That is to say, each novel has a beginning, a middle, and an end. The Curse of Chalion, Paladin of Souls, and The Hallowed Hunt are each wonderful novels, but Paladin of Souls stands out as the best of the three.

In an interview I conducted with Lois in 2013, she provided a brief summary of her Chalion series, calling it a combination of “court intrigue, death magic, and speculative theology.” Paladin of Souls includes each of these elements.

You will not find elves, dwarves, and orcs in Bujold’s story. Instead you will find a refreshing world that is uniquely crafted and filled with the detail that fantasy readers crave.

The protagonist of the novel is a woman named Ista who is both vulnerable and strong. Her weakness and uncertainty give way to an inner power that is deeply satisfying.

In Paladin of Souls, Lois McMaster Bujold exhibits her masterful word-smithing that has made her one of the most decorated authors of all time.

If you have never read Paladin of Souls, I recommend you move it up on your list. I encourage you to read the entire series for maximum enjoyment, but if you can only fit in one more novel, Paladin of Souls can easily stand on its own. It is one of the greatest fantasy novels of all time.