Voyage is set in an alternate timeline where Jacqueline Kennedy is killed on 11/22/63 and John Kennedy is left paralyzed. Although no longer able to serve as president, he becomes an outspoken proponent of manned space flight. 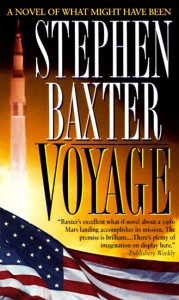 Stephen Baxter’s Voyage is considered one of the best works of alternate history. This hard science fiction novel tells the story of a NASA mission to Mars and considering how Baxter is one of the keynote speakers at the Sideways in Time conference, I figured I should check out his Sidewise Award winning novel before speaking to the gentleman. So does this 1996 novel still hold up?

Voyage is set in an alternate timeline where Jacqueline Kennedy is killed on 11/22/63 and John Kennedy is left paralyzed. Although no longer able to serve as president, he becomes an outspoken proponent of manned space flight and is able to sway public opinion to fund a manned mission to Mars. The story itself is told from a multi-POV cast of NASA administrators, scientists, contractors and astronauts as the technical and financial hurdles of transporting humans to Mars are overcome. Although there is a large cast, one could make a credible argument that Natalie York is the main character. She is a cynical geologist who is nevertheless obsessed with Mars and becomes convinced that her only chance of reaching the planet is to become an astronaut and work for an organization she believes embodies many of the flaws of her Cold War, technocratic America.

To Baxter’s credit he really did craft a plausible timeline of how NASA could reasonably put humans on Mars given the technology available between the 1960s, 70s and 80s. This is not a technological wankfest either. Baxter shows how many recognizable programs (the Space Shuttle, the Hubble Space Telescope, the Voyager space probes, etc.) had to be cut in order to create a successful Mars program or the inherent issues in untested technology like nuclear propulsion. In many ways this timeline, despite its feat in manned spaceflight, knows less about the Solar System and the rest of the universe than our timeline does. The message of Voyage stands in contrast to the common belief of many speculative fiction writers who state it was a mistake to stop at the Moon instead of trying for Mars. On top of that Baxter doesn’t spare NASA from criticism and shines light on some of the awkward moments of space exploration, such as the American government ignoring the German rocket scientists’ connections to human rights abuses when they built their V-2 rockets for Nazi Germany.

Voyage does have its flaws. Despite the changes to history and the mission of NASA, events play out pretty much as you expected. The same presidents still go to the White House as planned and despite an alternate career trajectory for Ted Kennedy (RFK is oddly still assassinated) American and international politics parallel the history of our own timeline. JFK, and everyone else for that matter, shows little interest in his potential assassination. Certain historical people, including Buzz Aldrin, are also wiped out of existence and replaced with fictional characters who are better able to lead NASA toward its ultimate goal of reaching Mars. The paralleling and multiple PODs hurt the plausibility of the overall timeline, but can be forgiven if Baxter is actually trying to make the argument that the overall NASA leadership of the time was unable to mount such a mission and would need to have been replaced.

Despite its flaw, Voyage is still worth a read. While Baxter does handle the engineering and logistic issues of a Mars mission well, its his portrayal of the human sacrifices necessary to achieve such a goal that you really see the brilliance of Baxter’s writings. Characters give up their dreams, loves and even their lives to achieve this one goal, even if it means there may be no future after this for any of them once this last, great feat is achieved. All the characters are complex and evolving, making Voyage an enjoyable read from start to finish (yes, I know that sounds cliche, but it is true in this instance). Fair warning, don’t look at the inserts at the front of the book unless you want one of the sub-plots spoiled for you.

More importantly, I noticed some odd similarities between the style of Baxter’s Voyage and web original alternate history of the present day. Although I can’t prove it, I suspect this book was more influential on the online alternate history community than people give it credit. That at the very least is worth picking up a copy Voyage.

Myths of Publishing: Anyone Can Self-publish, Part 4

A call for submissions and an interview with the author of Jo, Jo, Jo.

Roger Zelazny earned and won many awards as a writer over the years, but Damnation Alley was not one of his most popular stories. But it’s just as hard to condemn a piece of work that inspired such a cult classic film.

5 Books that Give Voice to Artificial Intelligence | Tor.com

The Greatest Fantasy Novels of All Time Part 6