Home Poetry Review: The Manufacturer of Sorrow by Michelle Scalise 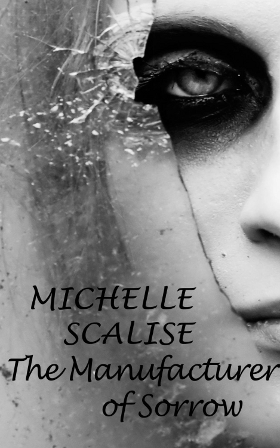 Multiple horror award winner and nominee Michelle Scalise presents her first poetry-only horror collection in The Manufacturer of Sorrow, which held a place on the Women’s Authors best-seller list at Amazon for several weeks in 2014. The collection’s title is taken from the poem, “Mouthful of Thorns.”

The forty-one poems touch on a wide range of macabre perceptions and experiences: death by drowning, life in asylums and prison, autumn as the season of impending death, and the peculiar horrors self-absorbed parents visit upon their children. The three final poems, “Red,” “Recede,” and “Her Little Blue Pills” evoke every parent’s – and child’s – deepest dread. Nearly every child has had to take, at some point, pills “crushed in grape jelly” or other sweet substance – these little pills, however, are not meant to cure.

Erotica is featured in many of the poems, as well. Among these “Shadow on the Waves” takes the laurel, with its “surging waves” providing ecstasy as well as finality.

The poetry structure in these works ranges from classic iambic meter of various lengths to an almost foxtrot-style meter in “Dark Garden”. Ms. Scalise uses actual rhymed words and phrases sparingly: “death walks in lace and waits behind the door / Life like a shadow running through cracks in the floor” (from “Close the Door”), but these stylized lines create powerful images, and add true poetic depth to the pieces.

From a production standpoint, omissions abound. The Manufacturer of Sorrow has been described as a collection of previously published and new work, but the previous works are not highlighted before the table of contents with the publication title and date. A few of the photos match up with the poem nearest them beautifully, such as “Cat,” and the front cover image, but other photos are out of focus and seem generic. Captions would have been helpful to clarify the placement of some photographs with poems, such as the screaming mouth (page 61) and the woman in the field (page 43). Punctuation and some spelling could have benefitted from a final look by someone unfamiliar with the manuscript. The final lines of six poems are left uncompleted by a period, making the reader wonder in at least two examples if the poem is finished.

Lovers of horror and the macabre unfamiliar with Ms. Scalise’s writing would do well, however, to take the plunge with The Manufacturer of Sorrow, before continuing their exploration of her work with her mixed prose and poetry collections, Intervals of Horrible Sanity (2003) and Collective Suicide (2012). Readers who know her earlier work will find delights both spine-tingling and poignant in this new collection.