With the start of the new year, it’s time to return to our growing list of the Greatest Science Fiction Novels of All Time.

Our list is not based on personal opinion or preference, rather it is based on objective evidence. The primary evidence we draw on for our list are the awards and nominations that a novel has received. We also consider the novel’s commercial success and cultural impact.

Many of the great science fiction novels were published before the creation of many awards, forcing us to rely on other evidence of greatness. In these cases, we place a stronger emphasis on the influence the novel has had within the industry as well as its social impact.

Our list will continue to grow, and it may eventually include all of your favorites. Before we get on with the latest entry, let’s revisit our growing list of the greatest science fiction novels of all time. Please keep in mind that these novels appear in no particular order. 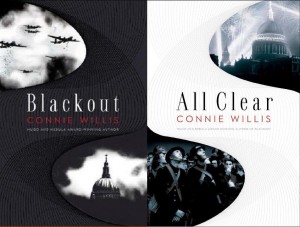 Connie Willis wrote two halves of a novel Blackout and All Clear that were later combined into one printing. The collected novels Blackout/All Clear received the Nebula, Hugo, and Locus awards.

Connie Willis is one of the truly Grand Masters of science fiction, and this novel is one of the many stones that lays the foundation for her greatness.

Blackout/All Clear is a true masterpiece that combines the art of historical fiction with the mind twisting pathways of science fiction. The novel features a group of historians from the future who travel back in time to learn the details of events during World War II.

Connie twists the time travel concept in her own way by driving away from the paradox theme of many time travel novels. She does this by imposing rules on time travel. The rules force the time travelers to appear in the past at locations and times that are close to their choosing, but not directly on the mark.

The shifting of their destination prevents the paradox, but it also serves to unsettle the characters, leaving them unprepared for their arrival and circumstances. Each character must cope with the new time and place they discover, while trying to find their way back to the future.

Along the way, Connie paints an amazing portrait of humanity during World War II. She breathes life into the people of the war, showing heroism and bravery from even the most unassuming of characters.

Blackout/All Clear will make you laugh, make you cry, make you think, and entertain you all the while. It is truly one of the greatest science fiction novels of all time. If you have not read it yet, you should make sure it finds its way onto your reading list.