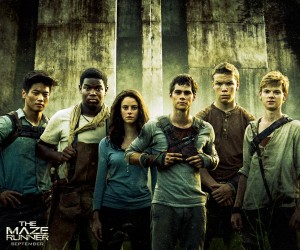 I never read the books and thought the trailer for The Maze Runner was a Hunger Games wannabe. But I also thought it would totally be up my street. I watched it recently with my sister and wow was I impressed. This is one story that kept me guessing all the way through. I usually am quite good at guessing the plots and twists and turns, but this film had me constantly screaming “what the heck is going on??!”.

For those that don’t know, and this isn’t giving anything away. The Maze Runner focuses on Thomas, a boy who is dropped, or rather raised via a lift out of the ground, into a community of boys is a large outdoor open space, that turns out to be the middle of a maze. Thomas has no memories other than his name, and it appears that goes for all of the boys on the maze.

A boy is delivered to the maze once a month, and that was the way until Thomas appears, then things start to change and a girl appears and she knows his name too.

But why the Maze Runner? I hear you ask. Well, the gates to the maze from their enclosure open every day, and a select few run through the maze to find an escape, trying to get back before the gates close for fear of being trapped in the maze with what is lurking there.

I highly recommend this film, you will constantly ask what is going on and will be shocked at every twist that is thrown at you. I can’t wait to see the next instalment which is released later this year.