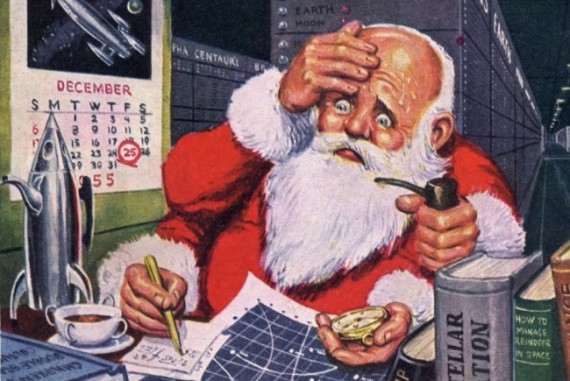 Since this is my last post before Christmas I feel I should at least acknowledge the holiday season. Not everybody celebrates, true, but in this day and age everybody knows about it. 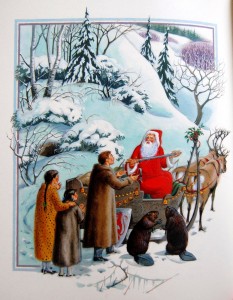 So, Christmas is a tradition filled with iconic images, not the least of which is the jolly fat man in the red suit. Sure, Santa Claus is supposed to be the modern incarnation of Saint Nicholas, a third or fourth century Greek Christian Bishop who gave coins to the poor, but look at him now! The fur trimmed clothing, the beard, the affinity for mistletoe… these are clearly the trappings of a druid. Druidic rituals were important at all times of the year, but early Celtic peoples looked to druids for solace and comfort most in the middle of a gloomy winter.

Santa is a figure of fantasy. Indeed, he has appeared in at least one major fantasy novel. People often forget that Father Christmas does make an appearance in C. S. Lewis’s novel The Lion, the Witch and the Wardrobe. The gifts that he gives the Pevensie children; swords, daggers, shields, and bows and arrows, would likely not be parent approved today (Although I do wonder how many children will get, or at least expect to get a Katniss-type bow and arrow set this Christmas).

Narnia’s Father Christmas is different from the jolly, cuddly Santa Claus we are used to today. While it is true that our modern image of Santa Claus comes from his description in Clement Clarke Moore’s classic poem A Visit from St. Nicholas, the Santa that usually comes to our minds today comes to us via the Coca Cola Company and an artist named Haddon Sundblom. 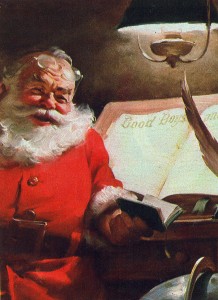 Haddon Sundblom was a Swedish/American artist who was contracted by the Coca Cola Company to paint a series of advertisements featuring Santa Claus. He began with Clement Moore, but quickly made the jolly fat man his own creation. Sundblom literally put all of himself into the paintings of Santa. Santa’s facial features are Sundblom’s own.

Although most famous for the Santa pictures, Sundblom’s work includes many different types of pictures including more than a few racy pin-ups, particularly one christmas pin-up he painted for Playboy in 1972*. Sundblom also created the iconic Quaker Oats man, using his assistant, Harold W. McCauley (whose own work appeared on many a cover of Amazing Stories in its heyday) as the model. 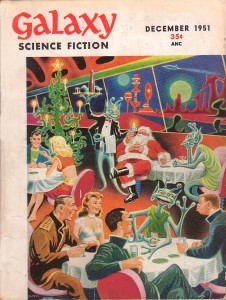 Santa also made several appearances on the covers of Galaxy Magazine on their December issues throughout the 1950’s. Artist Ed Emshweller (popularly known as “Emsh”) painted a series of humorous science fiction scenes featuring Santa Claus, although for some reason the jolly old elf sports four arms in Emsh’s pictures. In one he is depicted as a robot and in another he is shown lighting up a cigar in an intergalactic nightclub. 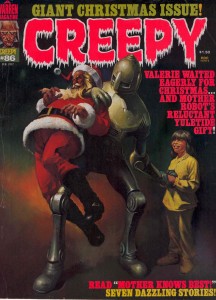 Santa and Christmas have made forays into science fiction. Who can forget the heartwarming film Santa Claus Conguers the Martians? On the other hand, maybe it’s better to try to forget Santa Claus Conquers the Martians, an execrable example of low budget cheezy sci-fi from the early 1960’s. I say try to forget because the film is so bad it’s not easy to get it out of your head. You can find it on Youtube, but you do so at your own peril.

And for those of you brave at heart there is also a subset of Santa Claus images in the horror genre, from scary Santas who have dubious intentions towards little children (and their parents) to a cover for Creepy Magazine from 1977. Ken Kelly depicts Santa being given a chokehold from a giant robot while a young child looks on with obvious delight. Messed up indeed, but still one of my favourites.

So, in the spirit of the holidays it is incumbant upon me to wish you all the complements of the season. I hope you all find some sort of comfort and even a little bit of cheer in this gloomy time of the year in the Northern Hemisphere. One needn’t even have to consult one’s local druid. Maybe a travel agent for a trip to a part of the world where the weather isn’t so frightful?

However you choose to spend your time this holiday, I hope it’s as merry and Jolly as a Haddon Sundblom painting. 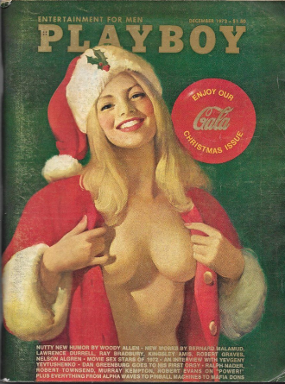