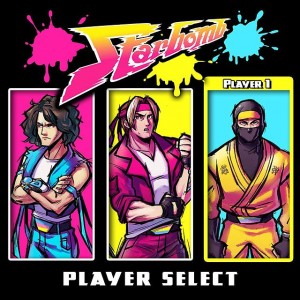 For those who don’t know, Starbomb is the name of an indie, comedy supergroup featuring the comedy duo Ninja Sex Party (Danny Sexbang/Leigh Daniel Avidan and Ninja Brian/Brian Wecht) and YouTube personality and animator Egoraptor/Arin Hanson. Hanson founded Game Grumps, a Let’s Play YouTube channel similar to Rooster Teeth‘s Achievement Hunter, with Jon Jafari. After Jafari left to work on his own channel, Avidan joined as “Not So Grump”. Enough background? Good, let’s talk about some geeky music.

Starbomb’s first self-titled 2013 album was an amazing piece of musical comedy. It combined the sexual humor of Ninja Sex Party with Hanson’s deep knowledge of video games to create a subversive rap, parody album. To be honest I knew nothing of these guys before I heard the first Starbomb song on YouTube, “Luigi’s Ballad“, which tricks you into thinking this is a romantic song as Luigi confesses his love to Princes Peach, only to be interrupted by his horny brother Mario who is only interested in having sex with Peach. After listening to their album over and over again on my daily commute I tracked these guys down and subscribed to their other projects, but it was Starbomb that I really wanted to hear from again. So when their new album, Player Select, came out this month, I of course picked up a copy.

Let’s just quickly sum up my thoughts. Is Player Select good? Yes. Is it better than Starbomb? No.

Frankly I feel it is a weaker album compared to the first. Hanson’s flow has improved significantly (it is most apparent in “The Hero of Ryhme”), there are fun cameos from video game personalities like Notch in “Minecraft is for Everyone” and Wecht’s beat has evolved into a higher level of sophistication. Nevertheless, I had a lot of issues with the new album. Voice acting isn’t very consistent. Hanson and Avidan voiced Mario and Luigi (respectively) on two tracks in this album, including the aforementioned “Luigi’s Ballad” from the first album. In each track they use different voices, that range from their own voices to Italian stereotypes.

On top of all that a lot of the humor is too referential, either recycling jokes from the first album or referencing jokes from their other projects, such as Toad’s voice in “Toad Joins the Band”, which would be a lot funnier to you if you had already watched the Game Grumps’ Lets Play of Super Mario 3D World. Now I usually review books and yes there are times I recommend someone read the first book in a series before checking out the book I am reviewing, but I never thought I would have to say that about music. A friend might recommend a certain album of their favorite band to you because its their strongest work, but you wouldn’t have to listen to all the band’s previous work to get the full enjoyment. I feel you kind of have to with Player Select, which means the album can’t stand on its own.

That all being said, I still liked Player Select, not only because I am fan of these guys, but also because of the awesome music video they released for “Smash!” when the album dropped. It was just an amazing song that managed in a short amount of time to not only point out the dark side of Super Smash Bros., but also had some well-done character development. “Glass Joe’s Title Fight” was also of the hidden gems of Player Select, especially for those who grew up with the original NES.

So yeah Player Select was a geeky and fun album, especially if you are a fan of Game Grumps and Ninja Sex Party. For those who have never heard of these guys until now, go check out Starbomb and if you like what you heard, go pick up a copy of Player Select.