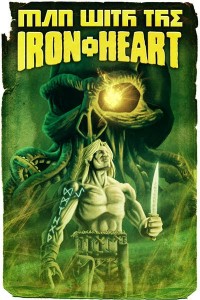 I have said it before that it is difficult to combine horror with alternate history in your story. I think the same rule of thumb applies for genres related to horror, like weird fiction or dark fantasy. That all being said, I support any author who tries to tackle this literary challenge, so when  I was offered a chance to review Mat Nastos’ Man With The Iron Heart (not that one) I decided to give it shot.

Man With The Iron Heart tells the story of Ian MacAndrew, a Scottish commando who works with the Czech resistance in Prague to assassinate Reinhard Heydrich. The “Butcher of Prague” survives the initial ambush thanks to a magic talisman, but is almost finished off by a marble-skinned giant known as Donner Grimm. As Heydrich clings while doctors race to save him with eldritch machinery, MacAndrew learns that Grimm has been tasked by Odin, the last of Aesir, to kill Heydrich and prevent the Nazis from bringing the Jotnar to Earth from their icy abyss to unleash Ragnarok. The two team up to finish the job they started and on the way they meet corpse golems, Nazi sorcerers, werebears and a lonely, gray god.

So yeah there are a lot of alien space bats in the air for this one. Despite Heydrich’s assassination not going as the history books tell us, alternate historical content is minimal. Man With The Iron Heart can better be classified as a secret history in that sense, but a better characterization would be weird “historical” fiction. Turns out human history for the last few decades has been dictated by the Edda Society, who are behind the rise of the Nazis, World War II and the Holocaust. They want to awaken the Jotnar and bring them to Earth, where presumably they will give the Edda Society supernatural powers and place them as rulers of Earth. The premise is actually quite interesting. Nastos seamlessly merged Norse mythology with Lovecraft’s Great Old Ones and I became invested in the protagonists’ conflict with the Jotnar and their human servents.

Fun premise and interesting characters notwithstanding, Man With The Iron Heart was a difficult read. From a technical standpoint, the book needs a lot of work. There are many spelling and grammar errors that should have been  caught before publication. The point of view also jumps around a lot, especially during action sequences when things just become a confusing mess. There are also way too many info dumps that break the pace of the story instead of allowing the reader to gain information organically from the obvious audience stand-in, Ian. There were times I actually considered putting the book down and just writing an incomplete review, but I kept at it because the dark fantasy Nastos crafted was just enough to keep me going.

So, what is the final verdict? I’m hesitant to recommend Man With The Iron Heart because I know other readers will be less forgiving of the poor writing on display. I think with a better editor, we would have a commendable work of weird fiction for fans who like a little history in their horror. Instead Man With The Iron Heart reads like a novel that was not quite finalized. If you like action and adventure against the backdrop of a Europe occupied by the Axis Eldritch Powers and don’t mind the raw draft feel, then you may enjoy Man With The Iron Heart.