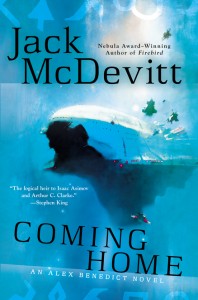 It’s November, so that can mean only one thing. Something new is coming out from the prolific mind of award winning author Jack McDevitt. Ace Books is releasing Coming Home today, and it is sure to be yet another McDevitt classic.

Our hero Alex Benedict (from the Alex Benedict novels) is at it again. About 10,000 years in the future, the antiquities deal is hot on the trail of another big find. The life of late archeologist Garnett Baylee had been centered on the search for long lost artifacts of man’s early space age. Over a decade after Baylee’s death, his granddaughter discovers a Corbett transmitter tucked away in an upstairs closet. It is one of the earliest devices used to send messages through hyperspace and a possible clue to other Baylee discoveries.

But in true McDevitt fashion, there is always another twist to the story. The interstellar ship Capella disappeared in a space/time warp mishap about the same time as Baylee’s death with Benedict’s uncle and mentor Gabriel Benedict aboard. But when an opportunity to rescue those aboard the Capella arises as it appears in linear space, Alex Benedict’s attention becomes torn.

McDevitt’s attention to scientific detail continues to be a staple to his storytelling. The author has a knack for creating settings in fantastic futures with just enough technological advancements to make the timeframe believable, but not distract from the plots which are more character based.

Another fundamental element in the McDevitt arsenal that can be found in just about every one of his books is the individual chapter introduction. Sometimes he uses fictional headlines and newsfeeds to set up the chapter content and other times he uses fictional quotes. In Coming Home, we are treated with quotes.

As an example, chapter seventeen begins with a passage that helps strengthen Alex Benedict’s passion for artifacts.

“We love artifacts because they provide a connection with the past and permit us, for a moment, to share in ancient glories. To own a pen that once belonged to Winston Churchill is to bring the man himself into our living room. A helmet worn by Andrey Sidorov allows us to climb out of the hatch with him onto Europan soil and to take that first up-close glance at Saturn. To touch the cup of Christ, could we find it, would put us in touch with Jesus himself.

This snippet says quite a bit about archeology and McDevitt shows no qualms about mixing fact, fiction and even religion. The objects of our past help bring history to life through reality while the quest for the unreachable, like the Holy Grail, continues to drive us to keep searching. This chapter introduction stood out the most because it embodies the conflict and emotion of the entire book.

The book Coming Home is easily on par with what we’ve come to expect from Jack McDevitt and his fans will not be disappointed. If I had one request of McDevitt, it would be a separate book (or books) compiling all of the chapter introductions from all of his novels, for they can be as poetic and artful as some of the novels they are found in. Once again, well done.