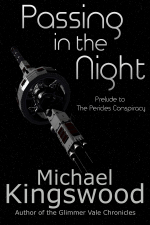 “Passing in the Night”
Michael Kingswood
Ebook $2.99 (free as of this writing)
Kindle Nook Smashwords Drive Thru Fiction

One thing I’ve been seeing more of in the last year or two is authors using electronically published short fiction as teasers or samplers for longer works. This is true of authors who only publish with the major publishers, those who are indie only, and all flavors of hybrid. Frankly, I think this is a solid idea for more than one reason.

In addition to allowing readers to see if they want to invest in a novel (such as Michael Kingswood does), this approach allows the author to develop supporting characters or side plots that would detract from the main storyline. Like you, my time is valuable. So I’m going to start looking at some short pieces in this column from time to time. Some will be stand alone, but others will be components in larger stories.

The novelette “Passing in the Night” is the prequel story for Kingswood’s novel The Pericles Conspiracy. This is a deep space adventure dealing with first contact. Set at least 500 years in the future, humanity has established colonies on a number of worlds. Kingswood restricts his universe to slower than light travel, although the technology in this future is such that deep space vessels can get pretty close.

Travel between Earth and the colonies appears to be routine, with passengers spending the entire time in some type of cold sleep. The crew and their families are awake for a year at a time.

If you’re wondering how I know all of this, it’s because Kingswood spends the first part of his story giving background and infodumps. In other words, not much happens. This was the only complaint I had about the story.

Fortunately, the first contact story he tells is intriguing enough to make up for that. I’ve not seen anything quite like the scenario the crew find themselves in.

The Pericles is on its way back to Earth for a major overhaul when the tedium is broken. Sensors detect a large object moving across their course. Examination by telescope reveals a ship, but not one that humans built. It’s damaged, and the damage hints that the ship was in some type of fight.

The Pericles attempts to communicate with the ship, and a lifepod detaches and matches course. Whoever the aliens are, they have a more advanced level of technology. Using lights, the crew indicates which airlock they want the aliens to use. Once they come on board, things take a turn for the interesting.

It’s here that Kingswood gives aliens that, in the brief glimpse we get, seem to follow John W. Campbell’s instructions to his stable of writers: write aliens that think as well as a man but not like a man. While I would have done some of the things they did, and can certainly understand their reasoning, it’s not the reasoning I would have used.

In spite of finding the opening slow, Kingswood does a good job of getting me interested in his dilemma. The Pericles Conspiracy is now in the virtual TBR pile.

A quick word on the production values. I read “Passing in the Night” using the Nook app on my phone. I have no complaints about the formatting. There were no weird page or line breaks. Indentations were consistent, as were all punctuation marks. The cover is appropriate to the story, and while it’s a little dark color-wise, this is a tale set in deep space.

If you like first contact stories, “Passing in the Night” is one you will probably want to check out.  It’s free at the moment, so give it a look.

What do you when a human explorer of another galaxy becomes a Messiah to his colleagues? Recreate him in a lab to fight himself. What could possibly go wrong?

Interview with Martha Wells, author of The Murderbot Diaries