In this week’s viewing: Yona of the Dawn’s heroine turns strong, Celestial Method is about finding the strength to admit error, and more! 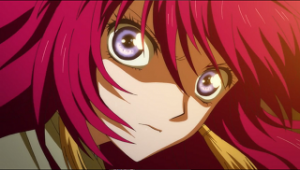 Yona of the Dawn #5 – And here’s where Yona says to herself, once and for all, enough of this damsel in distress crap. She’s becoming aware of how disconnected her life has been from the rest of the kingdom, but as she learns what the people around her are suffering, she’s just becoming more determined to do something. And when she makes up her mind, she’s strong, brave, and suddenly a hell of a lot sharper than the spoiled brat everyone from the palace takes her to be. She’s a lot like her father in that way, come to think of it.

Up to this moment, this series had the potential to be really, really good. Now it is really, really good. Yona’s rebound hasn’t happened unbelievably fast, but neither is it dragged out unnecessarily. She’s ready to pull in the same direction as Hak, and the plot feels like it’s picking up.

Speaking of believability, I expect now to get a supernatural explanation for how Hak fights like that, because it’s well beyond the bounds of even normal action-hero physics. 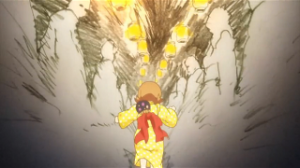 Celestial Method #5 – Yūzuki is still mad about everything, so Nonoka decides to get her her fireworks display. Cue exciting phone-calling and paperwork-filling action! Interesting to see that, for all the technology around, everyone still uses paper phone books. I’m not sure if that’s still normal throughout Japan, or if this is supposed to be a way of demonstrating that Kiriyako is a backwater.

Only the under the pressure of Nonoka and Noel’s determined niceness can Yūzuki finally admit that most of the unhappiness she’s suffered since the flying saucer’s arrival is her own fault. That was a much more satisfying moment than any dark revelations about the saucer would have been, with this setup.

Four of the five friends now reunited, it’s time to look at Shione. She’s clearly curious about what’s going on and may have started to figure things out, but she’s going to be a tougher nut to crack than Yūzuki. 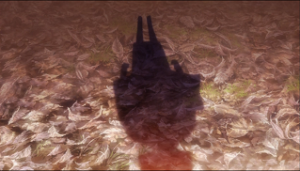 Mushishi #13 – There are superstitions around the world about touching another person’s shadow. In many cultures it’s believed to be connected to a peron’s soul or spiritual presence. A shadow without a person to cast is pretty creepy when you think about it.

After a long life well-lived, Mikage suddenly has to contemplate the idea that all the good times she’s had have come at the expense of someone else’s life, and that she has no way to set it right. Although she eventually accepts it, it probably haunts her for the rest of her days.

Yōkichi, though, has the chance to bring Akane back into the world, and does. So what happens to him? A person goes into limbo in the other world, neither aging nor starving. Does Yōkichi wander there forever, or does someone spot his shadow one day, and decide to see what happens when they step on it…? 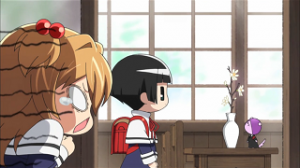 Gugure! Kokkuri-san #5 – Another episode dedicated mainly to setup and less to the actual gags. Shigaraki gets his first look at female Inugami, and turns out to be free of transphobia but also any sense of propriety. Kokkuri takes another whack at helicopter parenting, which only establishes that he’s a chick magnet (in keeping with Japanese legends, which generally say that fox spirits in human form are beautiful) and that Kohina is probably the most sensible member of the household, as if that’s saying much.

Kohina is also a seasoned veteran of bullying, as any kid that odd would be in the high-pressure world of Japanese schooling. (Fun fact: while checking that I had the word for “bully” right, I learned that Japanese has a word specifically for bullying-induced suicide.) Luckily for the comedy side of things, she’s now faced with the world’s most subtle and incompetent mean girl, who’s too shy to even give her proper name. “Jimeko”, in case it wasn’t clear, is modified from the word for bully, ijimekko.

It feels like it’s getting a little bogged down in explaining what everyone feels about everyone else here.

The Importance of Setting in a Novel

Who’s in Charge? The Trouble with the Doctor’s Companions

“Hello, My name is Milivoj Ćeran, I live in Zagreb, Croatia. I’m a professional illustrator specialized in fanastic art.” Q: What made you want to be a fantasy illustrator? A: “That idea was in my mind since I was kid, but the first „real“ idea was while I studied at academy of fine art. I’ve […]

A look at what’s coming your way from the anime world in October.