We all remember that first SF magazine we cracked during our own Golden Ages. John shares his own natal experience. 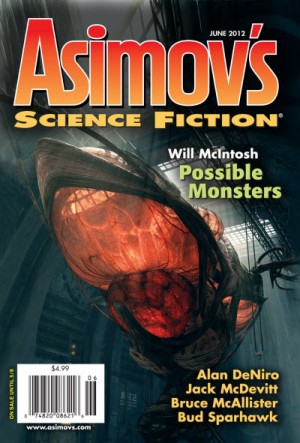 I do not remember when I was first introduced to the concept of a science fiction magazine, but it was in 2012 when I purchased my first subscription and my path towards true science fiction fandom began.I had just turned 22 and was looking for a special birthday present for myself. I was in Florida for the Disney College Program internship; this was the first time I had been on my own since the military a few years earlier. I reveled in the chance to be able to spend what little money I brought with me without my parents getting on my case about it. I figured a subscription to Asimov’s would fit the bill quite nicely.

The first issue came several weeks after I placed the order, and it ended up being the June 2012 edition. After several minutes of having a fanboy orgasm (this was a magazine that had produced many Hugo and Nebula winners, after all!) I finally opened it up and began to read. This single issue alone would change my life.

The very first editorial I read was written by Asimov’s esteemed editor, Shelia Williams. “We Have Met The Alien…” Up until then I had never read anything about fictional extraterrestrial life, but by the time I had finished the essay my thoughts on all of the various aliens I had seen and read about in the past became all too human for me, and I had to accept the reality (provided for by the late Clifford D. Simak) that it was almost impossible to create “a truly alien alien.” Deep down I sensed a reminder that science fiction is always based on reality, and because at the moment human beings are the only known form of intelligent life in the universe, the civilizations and beings we create are based off of us–based off reality. Until we meet real extraterrestrial lifeforms, even the most foreign and rigid aliens in science fiction will be human in some way or another.

Apart from the introduction by Sheila Williams, this issue also introduced me to a legend. Philip K. Dick is the subject of the “Reflections” column penned by yet another legend, Grand Master (and former Amazing Stories editor)) Robert Silverberg. Reading this article immediately inspired me to seek out some of Philip K. Dick’s works, and two weeks later Solar Lottery arrived in the mail. Mr. Silverberg gives a touching tribute to one of the authors who inspired him, focusing on some of his early novels and successes and the near-tragic life he led striving to make his living solely as a writer. I also first learned the concept of the Ace Double Books in this issue, and by the time this editorial was over I had learned about an entire chapter of science fiction history.

The final editorial of the issue came from the computer of James Patrick Kelly, who I learned shortly after reading the essay was also one of the leading masters of the science fiction genre. That month’s “On the Net” entry talked about the latest version of the Science Fiction Encyclopedia, which at the time was in beta mode as a free online version, which Mr. Kelly explained was the first free version of the Encyclopedia and went into some detail about previous volumes he himself had purchased in the past. I found “On the Net” a bit of an eyesore at first read, mainly because of the overwhelming amount of links and websites embedded in the paragraphs. It was not like I could click on each link there on the paper and have it bring me to the site, so as the impatient 22 year-old I was back then I decided to hurry through the rest and get to the stories, almost missing F.J. Bergmann’s dark poem, “Pavane” at the bottom of the page.

The science fiction story of the issue (and, consequently, the first story I ever read in an actual science fiction magazine) was Megan Arkenburg’s “Final Exam.” Written in the style of several multiple choice and short answer questions, with potential answers (and plot choices) provided, Arkenburg tells the story of the final days of an unhappy marriage in the midst of an attack on Earth by a grotesque, shape-shifting mutant from the ocean. In traditional fashion, at the end of the story the author gives us the “correct” answers which somewhat summarizes the entire story and ends–at least for myself–with a chuckle. It was an unconventional tale packed with emotion and vivid description, and told in a style that made me nod my head at the accuracy and realism. Despite the fantasy, I could easily picture a story such as this happening, no matter what answers I might have chosen.

Besides Arkenburg’s story, the issue contains two novelettes, five more short stories, four more poems and an “On Books” column by Paul di Filippo. I could spend many paragraphs summarizing the entire contents of this issue, but that would be doing it an injustice. My life had changed forever with the coming of my first Asimov’s, and without it is very possible that I would not be writing for Amazing Stories today. Without it introducing me to some of the best science fiction of the summer and its authors, and legends that have shaped what SF is today I might still be a mere aspirant, a untalented scribe. The June 2012 issue opened my eyes to a future as bright as any of those featured in the stories, and for one who was only beginning to open his eyes to science fiction and fantasy this was the perfect edition to start with.

Indie Book Review: “Passing in the Night” by Michael Kingswood

The quest for that forgotten title or author’s name begins here, where the only clue is a quote, a character, or plot…or less.

A review of the entire 30th issue of Mythic Delirium magazine.

Anatomical quirks: 10 things you didn’t know about your body