Who has the most iconic villains in the land? Read on to find out. 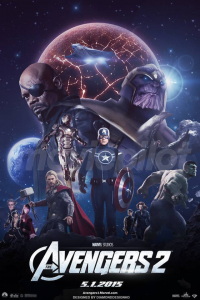 This week there is little introduction required. Hollywood continues to pound our minds with superheroes both at the theater and on our televisions. At their core, superheroes are a blend of science fiction and fantasy with an occasional twist of horror. As more films find their way into the world, I will continue to revise my list. The film industry seems to have finally hit their stride with great superhero films. Let me know which films you consider to be the top ten best superhero movies of all time in the comments section.

The build up for the Avengers movie spanned several years and multiple films. Most of the individual heroes starred in their own films, with Nick Fury and Shield sneaking around in the background. By the time the film bowed in the theaters, the anticipation had reached a fever pitch. I thought there was no way the film could possibly meet such lofty expectations, but I was wrong. It blew the roof off of it. Now how can Avengers 2 possibly live up? Joss Whedon and crew have their work cut out for them.

This one snuck up on a lot of people. Raise your hand if you collected all the comic books. Raise your hand if you circled this movie as one of the can’t miss hits of the summer. This surprising masterpiece seamlessly blended the superhero genre with a taste of the original Star Wars–Cantina Style. This gang of reluctant heroes delivered intelligent action and witty dialogue to provide one of the most satisfying theatrical experiences to come out of Hollywood in a long time. I wait anxiously for the sequel.

I confess that when Iron Man first was announced I was a bit disappointed in the casting of Tony Stark. It took some prodding to get me into the theater. Once I saw the film, I recognized the pure genius. Jon Favreau is often an overlooked director, who did a masterful job with both Iron Man and Iron Man 2. (Yes, he also plays the chauffeur.) His role as executive producer on both Avengers and Iron Man 3 prevented him from directing either of these films. Maybe I would have enjoyed Iron Man 3 more if he had.

Batman Begins was a another film for which I had very low expectations. More accurately, I had no expectations. The Batman franchise had been run into the ground, after Tim Burton had given it life, to the point where it wasn’t even watchable. On a whim, I went to see it with the guys. We were all amazed at how powerful it was, setting a new standard in superhero filmmaking. Sadly, I’m just not a fan of the third film in the set. Maybe the tragedy that I associate with it continues to taint it for me. The loss of Heath Ledger influences my view of the Dark Knight as well. Is this franchise now cursed with ill fortune more tragic than any box office numbers? 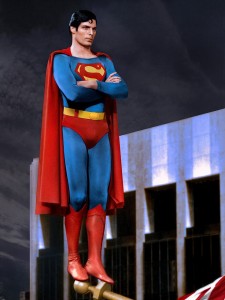 The film served as the benchmark for superhero films. It gave them life when there was none. It stood on an island for many years (with only a few Batman films) until the superheroes finally took over Hollywood. The characters are real. The story engaging. Gene Hackman as Lex Luthor is brilliant. I still chuckle at some of his subtle lines. Superman 2 was also worth a view, but nothing after.

Not all superhero movies can appeal to as wide an audience as Spider-Man. I was only a very casual fan as a kid, not very excited about the film, but when I saw it, I was swept away. Great acting. Great casting. Very well directed. The reboot as The Amazing Spider-Man is just as good, but in different ways. Many might say Spider-Man 2 is even better than the first.

The X-Men were always one of my comics. Like many other fans, Wolverine was always the most interesting to me. The first X-Men movie helped start the domination of Hollywood by Marvel and by superheroes in general. The first two films were very well done and enjoyable. X-Men: First Class set a new path for the franchise. It cut a more serious tone that made the X-Men feel more real. The X-Men are a powerhouse franchise boasting seven films and counting.

He is a non-typical superhero with a fun personality and was wonderfully cast. For those unfamiliar with the storyline, it came as a refreshing take on saving the world. Regrettably, the sequel is not worth mentioning, though many find it quite entertaining.

Yes, I know, this is an animated movie, but I can’t help myself. I love it. The animated spoof on superheroes cut new ground with smart wit, rolling together the things I enjoy about old-school James Bond movies and superhero films, while poking fun of those elements that never make sense. Caped crusaders indeed. 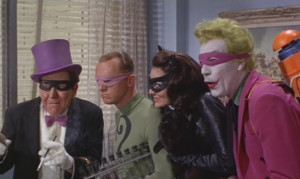 You might be mocking me by now, but for me, this is one of the all-time greats. Batman and Robin are still comic book heroes, complete with the splashed on the screen sound effects. POW!! WHAM!! The film brought us such iconic free-form phrases like, “Holy franchise, Batman.” The caped crusaders invaded our culture. The film was campy by intent and has a subtle humor that, for me, makes it watchable. The primitive special effects fit perfectly with the setting and the style of the film. Now, here is a test. We all know many superheroes, but who has the most iconic villains in the land? You guessed it—Batman. Why is it that his rivals are the most memorable? What other film has the likes of Catwoman, the Joker, the Penguin, and the Riddler all in one film? Are there any super-villains that measure up to any one of these arch-criminals? The four of them together? Forget about it.

This is a hidden classic for me. Ben Stiller and crew mock the superhero genre while making an engaging, well-executed, and humorous film. The superhero endorsements are awesome. I mean, in this new age of needing to make a buck, maybe Spider-Man could give up taking pictures, come out in the open like Iron Man, and sell ads on his Spidey costume. Now that would be an endorsement deal. I wonder if Spidey is a Nike or an Adidas guy? Which beer company could sign Wolverine?

Okay, so it’s the top eleven.

Stanley Kubrick offered two visionary glimpses of the future in his films. We really need to get better at picking futures.