OK, so despite my best intentions, I’m not really managing well with a post a week. You might ask, “what do you mean?!? You’ve had 5 posts in a row, one per calendar week, including this one!” Well yes, that’s true, but it’s been more of a struggle than I thought it would be. This one for instance is not going to be as broad as I would’ve liked. Oh well!

This being October and all, I bring you first the Science Fiction Poetry Association’s annual Halloween poetry reading. On the website you can read about the poets and listen to mp3s of the poems. My favorites were “Clowns” by Robert Payne Cabeen (read perfectly by Robert Neufeld), “Hitchcock’s Prophecy” by irving (mistakenly attributed to “irv”), “An Imbalance of Humors” by Matt Betts, “I Cannot Love You” by Maria Alexander and “Katzen Clavier” by Michael Arnzen. Unfortunately, many of the excellent poems are marred by monotone readings or poor quality recordings (hey, they should just ask me to record for them!). A couple have great musical accompaniment (“Watering the Alien Corn” by F.J. Bergmann and “Katzen Clavier” by Michael Arnzen). The whole thing is accompanied by some nice Halloween-esque art by Byron Winton and poets Marge Simon, Elizabeth Bennefeld, Sara Tantlinger.

Amy H. Sturgis’ Hallowe’en Countdown – My friend and colleague does this countdown to Hallowe’en each year, and they are always soooo entertaining. While she doesn’t focus on poetry, she always includes some. The rest is just as worth having a look at and following, as is her blog the rest of the year! So far this year, she’s done an homage to Edgar Allen Poe (Day 7). She’s included 2 “Hallow-e’en” poems by Winifred M. Letts (Day 5), which are wonderful; and a poem by “Anonymous” (the oh, so prolific, undead/immortal poet) called “The Ghost of a Flower” on Day 1. 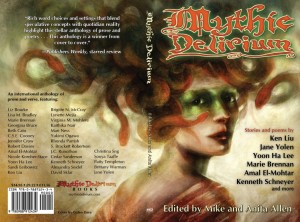 I’ve featured Mythic Delirium on this blog more often than is proper perhaps, but that is because it is so awesome. Excellent poetry always graces its pages and since its digital incarnation you’ll find fine fiction as well. Now, Mike and Anita Allen have published the first Mythic Delirium Anthology, which is a compilation of the first year of digital publication. And it is gorgeous to behold! The cover art is an amazing portrait of Medusa by Hugo Award winning artist Dara Galen. The table of contents is astounding, a veritable who’s-who of the modern speculative fiction world. Is that enough superlatives? What are you waiting for?!?

Next I have a couple of webzines for you. First, Niteblade. The poetry in this most recent issue is all ghosts. I especially liked the mystery of Megan Arkenberg’s “The Gate of Horn” and “Valediction for the Dungeon Master” by Mark Jones, which isn’t actually about ghosts but gaming (sort of). But actually, all of the poems are worth reading and together they illuminate a broad spectrum of dark and ghostly poetry.

So, if you are actually tired of Halloween already and would like some plain old speculative poetry, this item and the next are the closest I’m going to get for you, I’m afraid. Questioning by F.J. Bergmann is a wonderful little poem anthropomorphizing books. And as a book lover, these sorts of poems always tickle my fancy. This one, part of a series of poems giving books personae depending on their contents. This particular book is a manual of torture. It’s persona is not what you’d expect.

Edited by John C. Mannone, the SFPA’s online journal Eye to the Telescope Issue No. 14 has just been published: “Ekphrastic Speculative Poetry”. Taken from John’s Editorial introduction: “Ekphrasis has been considered generally to be a rhetorical device in which one medium of art tries to relate to another medium by defining and describing its essence and form, and in doing so, relate more directly to the audience, through its illuminative liveliness” (Wikipedia). And in this issue specifically “Ekphrasis is the poetic interpretation of visual art.” This is a big issue with 25 one hundred-word poems (another requirement) inspired by 7 pieces of art chosen by the editor. I’ll admit not having read all of them yet, I need more time for that, but a quick scan showed just how diverse a poet’s interpretation of a piece of art can be. It’s amazing what one image can inspire and evoke in the imaginations of diverse people.

And now, for a little non-fiction! I stumbled across this recently, probably because I recently interviewed Elizabeth Barrette. Nevertheless, despite being published in 2008, this is still an interesting piece on “Appreciating Speculative Poetry”, by Elizabeth Barrette. Some of the references and what-not are a little dated, but the ideas are sound.

That’ll do it for this week. If I manage to post next week, is still in the stars, but if I do, brace yourselves for a non-poetry post: It’ll be music instead! Stay tuned!