RIGMOVES takes readers into the corporate world of near future asteroid mining. But can the technical viewpoint hold the reader’s attention long enough to find out how it ends.

Following a recent discussion with the family about starships in science fiction and their intended purposes (yes, people do have these discussions), it became obvious that most of the time the ships are mere settings for the drama. Oh sure, some still get a following in fandom based on popularity, but in the end, the Nostromo was a tug, the Millennium Falcon was a smuggling ship, and many others were just transport ships that had star power in the crews or significant rolls in the plot. 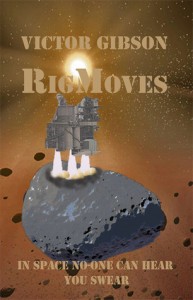 A few years back I read a book called RIGMOVES by Victor Gibson. In the mold of science fiction legends like Ben Bova, This novel took a closer look at how near future space exploration might impact trade and other business aspects that in turn impact real world culture and civilizations. In this story, the ships remain ships and allow the characters to grow on their own. So I re-read the book to remind myself how real ships were represented in science fiction.

RIGMOVES takes readers into the corporate world of near future asteroid mining. One of Cygnus Corporation’s top rig pilots is the unsuspecting hero Sulliman Smith. The day to day isolation can get to even the most hardened employee. Relationships are taboo in deep space mining, but Sulliman does not give up when an opportunity arises where he can meet fellow pilot Nadia Abdull. Amongst the dangers of space and the scrutiny of the bosses, the two build a relationship that leads to a future the readers will not see coming.

The plot is compelling enough to hold the reader’s attention. We finally see ships named and used for what they are intended. Cyg Two and Cyg Four, Suliman and Nadia’s ships. Tugs. That’ what I’ve asked for. Then it all falls apart.

Each chapter begins with a lengthy passage from a manual or notebook. “Rigmover’s Handbook discusses the rules and regulations set forth by corporate bureaucracy. Some of this helps set some of the backstory regarding sexual segregation, but overall, it still reads like an actual manual and becomes completely separated from the story. The Space Pilot’s Training School Manual covers the necessary formula you would use for gravity assisted power. Do the readers need this?

Maybe Cyg two should have had cloaking capabilities or interstellar power. Maybe even an illegal advantage NOT in the manuals. Careful what you ask for I guess.

The author Gibson is a former American anchor-handler who is very familiar with the shipping industry.  He has two previous non-fiction publications, The History of the Supply Ship (2007) and Supply Ship Operations: A Handbook (2009). RIGMOVES (2011) is Gibson’s first entry in the fiction section. It is a really good story that might even draw a sequel, but the technical bureaucratic side shadows the good stuff.

I’m sitting with a group of friends in the Seminary Street Pub, familiar faces here and there casting shadows upon near-forgotten memories, making plain the slippery nature of time and life. Red neon lights drench the dark paint of the walls. I watch my last beer swirl, dizzying, half-gone, inside a green glass bottle as […]