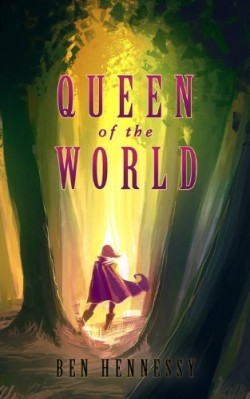 One of my pet peeves about current publishing practice is novels that are meant to be the first in a series, but give no indication of it on the cover or anywhere else. I understand why this is done: publishers want to be certain there is a market for the series before they commit to more than one book (although this is more understandable coming from small presses, those living on a financial knife’s edge who could be bankrupted by a poorly selling series, than from larger publishers which really can afford to commit to an entire trilogy). I appreciate that it wouldn’t be fair to readers to announce the need for additional books in a series if it proves uneconomical to publish them. Still, the practice is even more unfair to readers, who expect a volume to provide closure, only to get to the end to find that they will have to read other books to get it.

Ben Hennessy’s Queen of the World seems to fit into this category. At the end of its 400+ pages, the villains have been repelled, but they haven’t been vanquished. Meanwhile, those who have protected her throughout the novel pledge their continued allegiance to the title character, who ends the novel wondering if she will ever find peace again. This could be a brilliant post-modern literary ploy (“Closure? Pft! Let me show you how much I respect that literary convention!”), but I suspect it’s because the book isn’t meant to stand alone.

Okay. If you’re reading this review, you have been warned. Now that that unpleasantness is out of the way, the real question is: is Queen of the World worth reading? And, actually, it is a quite entertaining fantasy novel.

THE STORY: Five hundred years after The Four imposed peace on the world, ending war and poverty, a young girl (Sarene) dreams of leaving the farm she has spent her whole life on. Her simple act of rebellion is the beginning of an adventure that will involve Sarene with a variety of characters, many of whom believe she has been chosen to end the rule of The Four and bring freedom back to the world, some of whom wishing to help her, others wishing to stop her.

The novel begins a bit slowly for my taste as Hennessy introduces the main characters and situations. Despite the nice touch of being mute and talking to other characters with a sign language of her own making, Sarene is a callow, not especially compelling character. The mountainous Kanderil, a former military agent who eventually rediscovers his moral purpose in protecting Sarene, eventually grows into somebody unique, although, initially, he seems more like a stock character.

Queen of the World really comes alive with the introduction of Spasmodic, a demon created for the sole purpose of killing Sarene, who decides to hang out with her instead because he’ll enjoy the mayhem that potentially swirls around her. I’m a sucker for a good trickster character, and Spasmodic fits the bill: funny, unpredictable, with a bent for destruction. His presence constantly invigorates the novel. Other characters, including smugglers, soldiers, princes and the Four themselves are well drawn and add to the rich tapestry of the novel.

Hennessy has strong storytelling skills. Queen of the World is a complex tale, with a large number of characters acting out of a variety of motives. It shifts between the points of view of eight or nine characters, each carefully chosen to advance the narrative. Despite its complexity, by the end of the novel, all of the actions of all of the characters are clear.

Queen of the World shows some of the signs of being a first novel. There is the occasional bit of telling rather than showing, in, for example, the following passage: “Sarene nodded, her mind reeling. How does one react to having their life turned upside down like this? She’d never experienced anything remotely similar, nothing as devastating or visceral.” (66) Better to show us her confusion through her actions than to bluntly state her emotions in this way.

On the other hand, Hennessy does do some things that I haven’t seen before. There is a paragraph early in the book, for instance, that tells of a rabbit hunt from the point of view of one of the rabbits as it is killed. Later in the book, Kanderil tries to explain a point about evolution to Spasmodic, with hilarious results. There are nice touches like this throughout the book.

Fans of fantasy fiction will find Queen of the World an enjoyable read. And who knows? If there are enough of you, perhaps the full story will some day be told.

Filled with random anecdotes that will entertain your friends and impress the guy sitting next to you, The Book of ORIGINS by Lawrence Millman is a fun collection of stories to read.

PLOT REVEALS OF TWO EPISODES OF THE UPCOMING AMAZING STORIES!!! Plus some of the reviews are in for Apples new streaming service. It’s being met with a resounding “Meh”.

Pacific Rim – A Winning Combination of Robot versus Monster