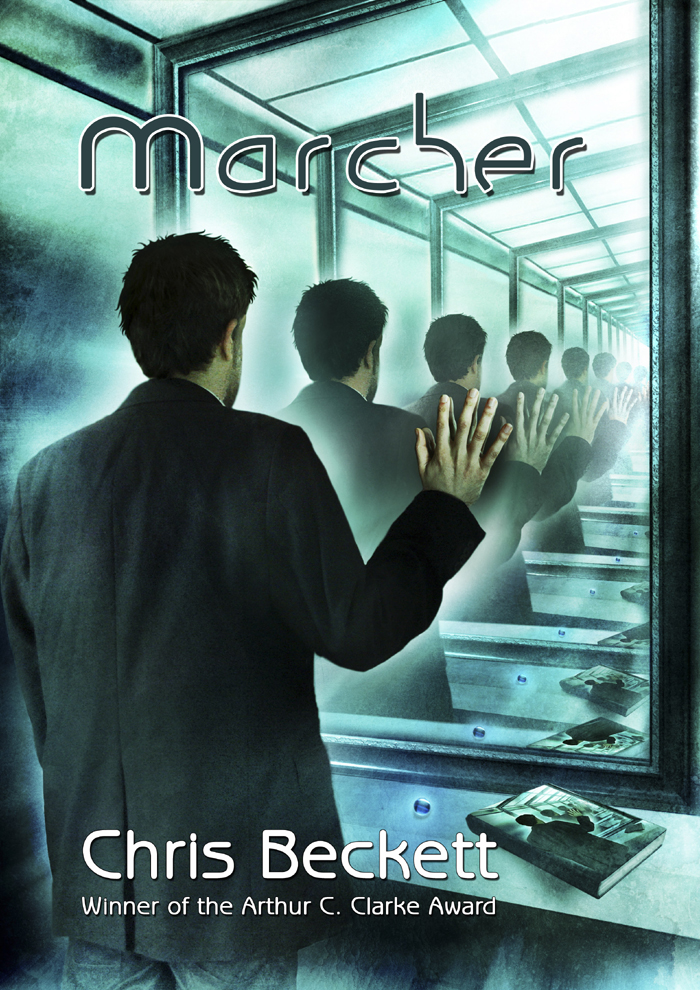 When his first novel to be published in the UK, Dark Eden (2012), won the Arthur C. Clarke Award, Chris Beckett seemed to many to have come out of nowhere. In-fact the author had been steadily publishing short stories since the beginning of the 1990s and his first book, The Turing Test (2008 – Elastic Press), had won the Edgehill Prize, the UK’s only national award for single-author short story collections. No doubt contributing to a sense of sudden, spectacular success was the fact that Beckett’s first two novels, The Holy Machine (2004 – Wildside Press) and Marcher (2009 – Cosmos), had only originally been published in the US, but not in the author’s native UK. Now Marcher has made its UK debut from Newcon Press in a substantially revised version (The Holy Machine appeared from Corvus in the UK in 2010 and was reprinted by Atlantic Books in 2013). I read the Cosmos edition a few years ago, and some of the stories on which that was based as they appeared in Interzone before that. So has it been worth the wait?

Marcher is a novel about order and control, freedom and escape, the differences between people, borders and knowing one’s place. Its central characters are an immigration officer, Charles Bowen, and a social worker, Jazamine Bright. It is a near-future science fiction set in a parallel Bristol sometime in the early 2000s.

How can it be a near future novel if it is set around a decade ago? That would be down to Marcher’s complex genesis. To quote to the Author’s Acknowledgement:

Marcher was first published in 2009 in the US by Cosmos. The present UK edition is not simply a re-edited version of that book, however. It has been very substantially revised, with a completely different ending, a shift from 1st to 3rd person, and cuts and additions throughout the book. I regard the present version as the definitive one, and am very grateful to Ian Whates for giving me this opportunity to have another crack at a book which I never felt I’d quite finished.

Five of the stories were published in Interzone between 1993 and 2002, with ‘Tammy Pendant’ appearing in Asimov’s in 2004. While there is little interaction between some of the characters, betraying their origins in separate short stories, Becket has done a remarkable job of weaving the disparate elements into a complex mosaic of a novel, such that if one weren’t aware that it was, to use that old term, a ‘fix-up’, one probably wouldn’t realise at all.

The original edition of Marcher was a deeply interesting but very frustrating book, riddled with typos and inconsistencies, and simply begging to be rewritten and edited afresh to bring out its full potential. This isn’t revisionism on my part, I though so at the time. Well there are still a couple of typos in the new edition and one slight inconsistency when characters don’t, according to the internal chronology, hear a live radio report about a very major piece of breaking news until the day after it happened. But now Marcher fulfills the promise always inherent in the material, proving third time around to live and breath as very notable work of full-length fiction. Praise too should be given for the very striking cover art by Ben Baldwin.

Charles and Jazamine are both orphans of a kind. Charles sees behaviour more in terms of principles and morality than psychology, and has often has difficulty understanding and relating to people. He lives alone since the break-up of his last relationship, in a house which he has obsessively filled with mirrors reflecting each other into infinity. He has chosen to become an immigration officer to try to make a positive difference, and so finds a point of contact with Jazamine, a social worker he first meets at a party but then whose paths cross again professionally.

What makes Marcher science fiction as well as a social and political novel of character, is that Charles and Jazamine live in an England with significant differences to that in our reality, one strand of a multiverse of untold, constantly diverging parallel worlds. Charles once worked as a regular immigration officer, but now he struggles to regulate the coming and going of shifters, those who use slip, which may be a drug, or may be something else, no one quite knows what it is or where it comes from, to either leave his particular world or enter it. Obviously shifting appeals to the disaffected, and though Charles’ department focuses on shifters wherever they may be found, including the unhappy youth of elite boarding schools, Charles’ work (in Marcher at least) is centred around the Social Inclusion Zone of Thurston Meadows on the outskirts of Bristol.

Jaz meanwhile is a social worker not in the current British system, but in an almost completely privatised version administered by the Department of Social Inclusion together with its various commercial partners. (The NHS barely exists in a world which remains perfectly nice for the middle-classes but is a soft dystopia for those further down the system). The DSI is a deliciously Orwellian coinage;  the only way those unable, for whatever reason, to work (be that due to a lack of available work, health issues, whether physical or mental, disability or whatever else) to obtain long-term social security benefits is to go onto the Social Inclusion Register, which requires moving to one of the Social Inclusion Zones, effectively social housing estates and de facto ghettos – everyone carries ID cards -which exclude them from regular society and, for those who have committed offenses, also function as open prisons. Thus the Inclusion Zones enable the ‘dreggies’ to perform the valuable work of reminding those lucky enough to have a job not to challenge the system or demand higher wages, all the while keeping out of sight of the privileged. Within this system, rather than the notorious ‘video nasties’ which once provided disreputable cheap entertainment and enraged the Daily Mail / Express and Conservative politicians alike, the opiate of the people is found in dreamer videogames with titles such as ‘Warm Gore’ and ‘Sex Heaven’, which pump appropriate emotions direct into the user’s brain. But while the dreamer games simply offer the illusion of escape, slip is the real thing – once a slip seed is swallowed the person who has taken it will, within a matter of hours, disappear, only to fall randomly through the labyrinth of worlds and appear on another earth. But what is slip? One character explains:

‘…It bridges the illusory boundary between mind and matter, between body and soul, between one mind and another. It unravels time, it brings us into the presence of the archetypal sentiences that we, in our crude human way, call gods. And of course, and most famously, it enables us to move from one world to another…’

Adding to the surreal science fictional aspects of the novel, slip also affects the mental processes of those who come into contact with shifters, inducing strange dreams, memories and emotions from other versions of themselves, or of the shifters they have encountered. This fizz, as it is known, together with the intense pressure of work, takes its toll on Charles as he begins a relationship with Jazamine. And as Charles finds himself increasingly involved with the Thurston Meadows Social Inclusion Zone violence is fermenting among a group of shifters who find a focus for rebellion in a nihilistic cult inspired by Norse mythology.

Beckett’s own experience as a social worker, manager of a social work team and later a lecturer in social work at Anglia Ruskin University informs the narrative as we see how public servants are continually under-resourced and overworked, given conflicting, often impossible targets, then scapegoated when something goes drastically wrong. The development of events is cynically realistic, against which the novel pits an unromanticized love story. Jaz sees people in psychological terms and holds a mirror to Charles in which he sees questions about himself he does not necessarily want to acknowledge or address. And so Beckett skillfully brings together his story of boundaries and transgressions on levels personal, social, political, and metaphysical. How will society function, what point is there in protecting conventional borders when people can slip between universes almost at will?

Beckett explores the conservative, fear-driven mentality of restriction and repression – there are echoes of the reactions of the West to 9/11 and the London bombings of 7/7. But then he offers no easy answers. this new version of Marcher is a far better book in every respect than its predecessor: more focused, better-written, more provocative and more emotionally compelling. The ending is tough, uncompromising, and not what one might expect. Yet along the way there is even room for a little, often sardonic, humour, notably in the Reginald Perrin-esque final gesture of the benign, long-serving but not overly competent ‘Welfare Man’, Cyril Burkitt.

There is a lot going on in these 210 pages. There is much to think about, much to absorb. Marcher isn’t perfect – one might question how the property market functions in a world in which the long- term unemployed are effectively forced to move home to obtain social security – and there is a SFnal  machine which appears to be in some way connected with slip and which appears as if it will become significant, but which is never appropriately accounted for. In the end it serves no purpose, in the narrative, and slip itself requires no explanation.

These are though, minor quibbles. I am reminded, thematically, of Christopher Priest’s early novel, Fugue For a Darkening Island, which also, in a very different way, addressed fears about immigration, and which like Marcher, was revised and rewritten by its author later in his career. Marcher certainly falls into the mainstream of left-leaning, socially and politically engaged British genre writing. At a time when the Conservatives are seeking to position themselves ever more nastily to the right in reaction to the rise of the nationalist, ultra-capitalist, pro-corporate, slash-workers-rights and scapegoat immigrants United Kingdom Independence Party (UKIP) Beckett’s hall of mirrors could not be more timely. When pressure becomes unbearable something has to give.