All about the shenanigans at VCON 39 which took place October 3-5/2014, at the Vancouver Sheraton Guilford Hotel, Surrey, British Columbia, Canada. 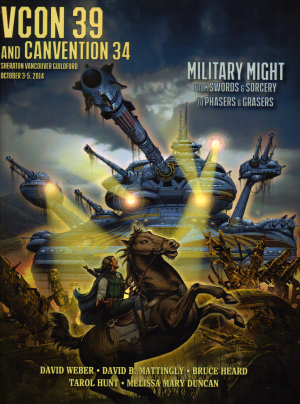 A purely personal review driven by fatigue toxins, conflicting memories, and dying brain cells. Was a very good con, in other words.

Will be interesting to see if Steve Fahnestalk and I write about the same things in a different way, or in the same manner, or if we write about entirely different things.

I may appear to namedrop, but you see I have a bit of an advantage over regular attendees in that I was in communication with the guests of Honour before the convention (because of the program book & the writers workshops), and have been active in fandom for decades, long enough for numerous authors to recognize and despise me on sight. Hence very easy for me to get into conversations with them… Nah, I’m namedropping, cause it’s fun.

I’m going to reel off selected happenings at random, but first I’m going to list and describe the photographs in order of appearance so you’ll know what you are looking at. 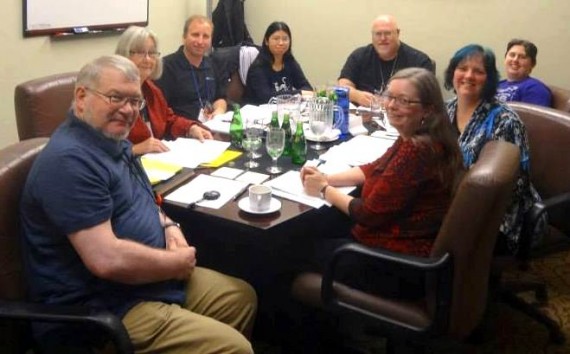 Illo #3: Me staring dubiously at Aurora nominee pin I’m about to present to Eileen Kernaghan.

Illo #7: Robert J. Sawyer CSFFA Hall of Fame Inductee with Clint Budd, Past CSFFA President and Chair of the Hall of Fame Jury.

Illo #8: Shelley Reeder as Prince Monshikka. (Note: animal heads are soft sculptures by Alyx. All fur is faux fur. No critters harmed in the making of the costume.)

Illo #9: Me quietly grooving on internal giddiness. VCON will do that to you. 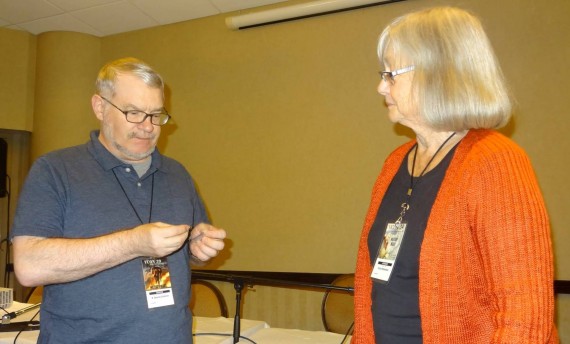 So, about those shenanigans…

During the High Tea prior to the actual Aurora Awards Ceremony I was lucky enough to sit with Steve & Lyne Fahnestalk (Steve and I traded jokes as to why the other couldn’t possibly win the “Best Fan Related Work” Aurora for our Amazing Stories online columns), David Mattingly and his wife Cathleen (David the Artist GoH), Rose and Dave Wilson (Rose in charge of the VCON art show and nominated for her work at VCON 38), and Stan G. Hyde, one of the founders of Monster Attack Team Canada and a world-renowned Godzilla expert. A nice mix making for lively conversation.

As fate would have it neither Steve nor I won, the award going to the third nominee Dr. Robert Runté. Actually, I’d kinda suspected Robert would get it. He established solid fannish credentials with numerous publications in the 1970s while at university, became a widely respected academic on CanLit including SpecFic, and is currently an editor for Five Rivers Publishing. Triple threat! Triple talents. Worthy, deserving, and quite pleased to win. I hate him.

Oddly enough, before the High Tea I and Stan Hyde, an old friend since University days, were in Hospitality excitedly discussing Godzilla lore with a fellow enthusiast, only to discover as we all got up to go to the ‘High Tea’ we’d been talking to David Mattingly. 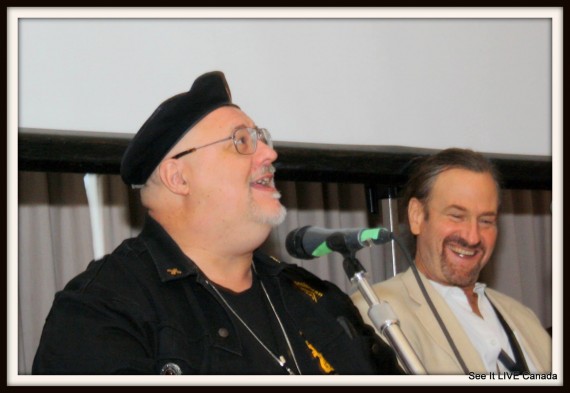 He also mentioned that the guy who does his maps (quite beautifully as witness the ones in CALIDAR THE STRANGER SKIES I purchased at the Charity Auction) makes a living teaching English to young students in Japan. Which is wonderful, except that he speaks with a thick Glaswegian accent. I predict an entire generation of Japanese diplomats who sound like they were born and raised in Glasgow!

Speaking of the auction, walking by the silent auction table and spotting a hardcover book titled THE AURORA AWARDS – THIRTY YEARS OF CANADIAN SCIENCE FICTION which brought me to a dead halt. I’m the CSFFA/AURORA Awards Archivist and I’ve never heard of this book! Turned out to be an anthology of Aurora-winning Short Stories, with an intro by Jean-Louis Trudel, published by Rene Walling’s Nanopress back in 2010. Needless to say I put a bid on it. Glad to say I won. Straight into the CSFFA archive it goes!

Attending the Aurora Nominee pin ceremony (if you’re nominated, you get one) and being called to the front to pin one on Eileen Kernaghan. The photo shows me staring down at the pin. It’s in two parts. The ‘dagger’ part which penetrates clothing from the outside, and the ‘anchor’ part which receives the ‘dagger’ from the inside of the clothing. What if I accidently stab her? How would my reaching under her blouse be interpreted? I chicken out and hand her the pin. Safer and less rude, the proper thing to do.

I then turn to the assembled authors, publishers, and other genre professionals to tell them about my CSFFA Newsletter AURORAN LIGHTS with its new mandate to promote Canadian professionals. “I want you to think of me as the biggest tool you know.”

Quite a bit of laughter. Oops. Forgot to say “promotional” before “tool.” Well, at least I got their attention. 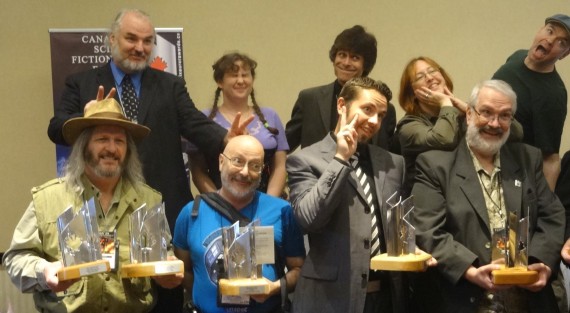 My wife, author Alyx J. Shaw, and I having dinner in the hotel lounge when Robert J. Sawyer and a friend who’d just driven up from a conference in Seattle ask if they could join us, in their case just for a pop and a coffee to help them unwind. Of course! Much conversation all around, except when Alyx and I were chomping down hard. If, in a future novel of Robert’s, you read a scene depicting gluttonous aliens rending and masticating their prey, you’ll know where he got his inspiration from.

At dinner Robert convincing me and my wife we should utilize twitter for self-promotion. I have a twentieth century mind, Robert has a twenty-second century mind, so in theory it all evens out. Nevertheless, if horrifying consequences ensue, he’s to blame! You can tweet me at @rgraemecameron if you dare. 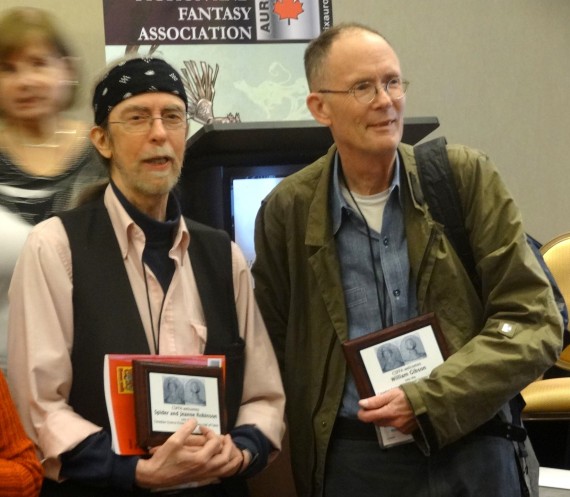 Standing by the door tapping my pen in time to the Beatle’s concert thrown by Spider Robinson, Tam Gordy and Steve Fahnestalk. Spider may be thinner than thin but he still has an amazingly powerful voice. “It’s been a Hard Day’s Night’ and ‘Nowhere Man’ among the many classics beautifully performed.

Meanwhile, every few minutes during the Beatles Tribute concert, a 95 year old black woman in a wheelchair next to me beckoning me to bend down close to her mouth so I could hear fascinating tales of her shenanigans before she got married at age thirty. Not sure why she wanted to tell me these things, but she sure had a good time in her youth! Better than I did.

Hearing second-hand about the somewhat inebriated woman who grabbed the life-size cardboard cut-out of Mr. Spock on display and ran off with it to nobody-knew-which-hotel-room for nobody-knew-what-purpose. It was quietly returned the next day. 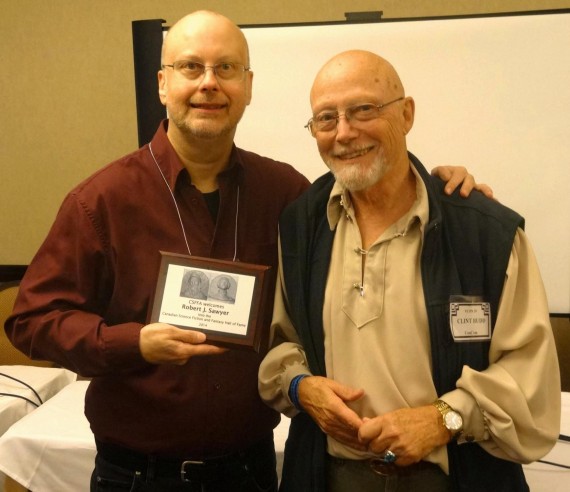 Drinking beer with Frank Johnson, the gifted artisan who’d crafted the Aurora Awards for 23 years, retiring this year and winning one of his own creations in recognition of his service, much to his genuine surprise. I know his surprise was genuine. I asked him. Anyway, we had a great old time talking about Giles and his political cartoons. If you know who Giles was, you ain’t young.

Watching a giant Tasmanian Devil cosplaying as Thor stomping down the corridor to the accompaniment of a wide variety of appropriate noises.

Running up to William Gibson (who remembered me as the guy who gave him a video of TEENAGERS FROM OUTER SPACE – long story) and babbling about my new mandate as editor of the AURORAN LIGHTS to promote SF professionals, etc., wonderful opportunity for him, and so on… only to realize as I turned away that, what with his being one of the most iconic literary figures on the planet, that he was hardly in need of more promotion. As I cringed away I knew he was studying me with his trademark quizzical, bemused and relaxed yet penetrating observational persona, a combination of Mr. Spock and Perry Como now that I think about it. 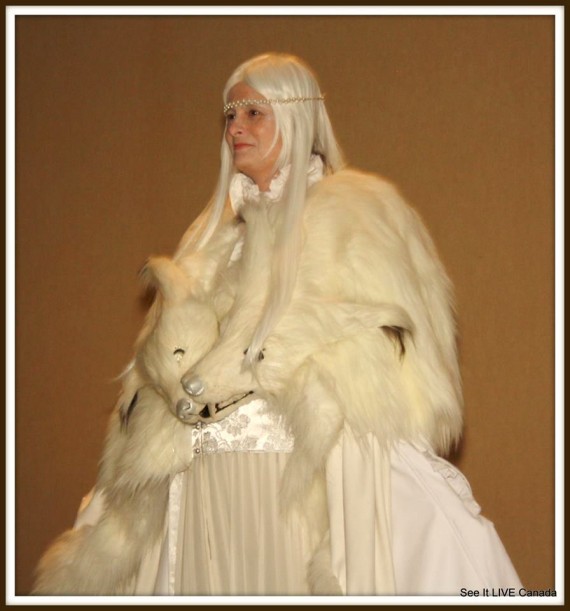 Garth Spencer (first Canadian fan to win an Aurora Award, or Casper as it was called back in 1986) telling me that twice, having mistaken him for me, attendees approached him congratulating him for his work on the program book. We stare at each other in horror, each thinking “I don’t look THAT old and degenerate!”

While waiting for the closing ceremonies to begin observing Author GoH David Weber coming down from the dais to quietly converse with a blind fan, letting her touch the assorted medals and gizmos hanging on his chest, quite obviously thrilling her to judge by the radiant smile beaming from her face. He initiated this on his own. Damned decent of him. Thoughtful thing to do. 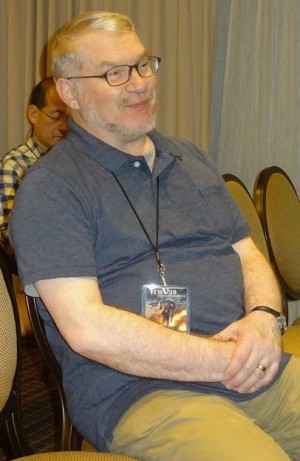 Learning that the theme of VCON 40 (October 2-4, 2015) will be Time Travel, that the Author GoH will be Joe Haldeman (FOREVER WAR, THE HEMINGWAY HOAX), and that the Fan GoH (the first we’ve had for quite a while) will be Steve Forty, long of Pacific Northwest convention fame and a well-known booster of local fandom. Steve once received an Elron award because he introduced John Norman, of GOR series fame, to Lionel Fanthorpe, the self-acknowledged worst SF&F genre writer of all time. A clash of Titans! Steve has a lot to answer for, and will do so at VCON 40.

Run out of time. Run out of energy. I’m still tired from the con. I will write more on VCON 39 in AURORAN LIGHTS, my perzine SPACE CADET, and in THE FANACTICAL FANACTIVIST (my Faned Awards Newsletter), all of which will be posted at my website www.cdnsfzinearchive.org when they are complete.

Probably next week’s column will be all about my presentation of the Elron and Faned Awards at VCON 39. See you then. Meantime, start saving your pennies for VCON 40!