After having examined Lagrangian points in science, I would like to offer here some thoughts about their possible uses – in fiction and in a near (or far) future space colonisation. 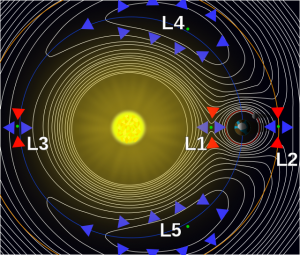 I have already talked about two of the five points, L1 and L2 of the Sun-Earth orbit, regularly used for satellites. Space colonies are another important topic when discussing Lagrangian points, and in this case the ones in the Earth-Moon system are of particular interest, due to their proximity to the Earth. The most suitable candidates are the two stable points L4 and L5.

As Gerald K. O. Neill pointed out in his article about colonisation of space “ultimately, colonization could take place in the entire sphere, 3 x 10^17 km2 in area, that surrounds the Sun at the distance we have evolved to prefer (the so-called “Dyson sphere”). For the first colony it is probably best to choose a particular point on that sphere, within easy range of both Earth and Moon, not so close as to be eclipsed often, and preferably stable against displacements in all three coordinates. The L4 and L5 Lagrange libration points satisfy all these conditions. They have the further advantage of forming only a very shallow effective-potential well. Earth, Moon, Sun and the colony form a restricted four-body gravitational problem, for which the full solution has only been worked out within the past several years. The stable motion is a quasi elliptical orbit, of large dimensions, about L5. The maximum excursions in arc and radius are several tenths of the Earth-Moon distance. On the stable orbit there is room for several thousand colonies; a long time will pass before colonization can fill so big an orbit.” (Gerald K. O’Neill, “The Colonization of Space”, Physics Today September 1974, p. 32).

However, given to the fact that those points tend to collect dust and debris, and that their orbits get sometime outside the protection of the Earth’s magnetosphere, they are more problematic than they could look on paper.

Fiction has, obviously enough, made an extensive use of the Lagrangian points. A famous case is Rocheworld, by Robert Forward, in which scientists study the points evaluating mass and velocity of two similar size bodies. This makes the Lagrangian points less stable, but still exploitable (see this article of Stephanie Cox on IO9 for the details about it).

A more recent example is offered by Peter F. Hamilton in the first instalment of his Night Dawn’s Trilogy, The Reality Dysfunction. Joshua Calvert, the daredevil pilot of the Lady Macbeth startship, brilliantly uses one of the Lagrangian points between the gas giant Murora and one of its moons during an epic space battle and for his prowess is nicknamed “Lagrange Calvert”.

Finally, the (in)famous L3 of the Earth-Sun orbit. I have mentioned in Part 1 of this article that, differently from L1 and L2, L3 is going to be most likely unused, since it remains constantly hidden behind the Sun. Thus it was almost compulsory for SF writers to start speculating about the existence of a hidden “Planet-X”, or a Counter-Earth, at that point. Literary references here abound, from The Illuminatus! Trilogy to Antigeos series of novel of Paul Capon, just to mention two (a good list can be retrieved here). The problem with L3, however, is that is a point inherently unstable, not only for what already explained about L1-L2-L3 in general, but for the specific case of Sun-Earth orbit: there are also other bodies in inner orbits, like Venus, that also would exert their gravitational pull.

A NASA paper on this topic makes for an interesting reading:  “A popular theme in early science fiction stories was invasion by creatures from Planet X. The requirement that Planet X remain hidden behind the sun places it at the L3 point of the earth-sun system. Unfortunately for our would-be invaders, the L3 point is a weak saddle point. The real, positive eigenvalue spells disaster for Planet X. Its orbit is exponentially unstable, with an e-folding time of roughly  = 150 years. While there can be no Planet X, the long e-folding time makes L3 a good place to park your invasion force while final preparations are made…” Take note, Death Star.

Cats. SJW Credentials. In a science fiction setting. This should be among our most popular posts. Cats. It HAS CATS! Did I mention – Cats!?

NICER Image of the Night Sky Than Ever Seen Before