Our list of the Greatest Science Fiction Novels of All Time continues this week with a novel that helped usher in the age of science fiction. Before we get to this week’s entry, let’s take a look back at our list so far. 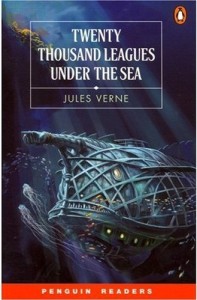 Twenty Thousand Leagues Under the Sea by Jules Verne

Twenty Thousand Leagues Under the Sea by Jules Verne is one of the most iconic of all science fiction novels. It represents a blend of speculative science and adventure while commenting on society and the human condition. Most importantly, the novel sparked the imaginations of countless fans and authors and expanded the horizon of science fiction.

Verne’s novel was inspired by a combination of the epic poem The Odyssey by Homer, Victor Hugo’s The Toilers of the Sea, famous explorers, and scientific breakthroughs of his day.

The 1800s were an age of discovery for humanity. Many mysteries still lay within the boundaries of Earth. The oceans and its hidden secrets stirred imagination much as grand expanses beyond Earth inspire so many today.

Many of the heroes, when Verne wrote his novel, were famous explorers. Men and women seeking out the final frontiers Earth still had to offer.

Twenty Thousand Leagues Under the Sea adapted the invention of the submarine into an amazing adventure. He even named his submarine the Nautilus after one of the earliest submarines.

While Jules Verne wrote his novel in the days before science fiction was science fiction, it still remains one of the greatest science fiction novels of all time. Evidence of its greatness cannot be found in the awards it won, but rather through its impact on so many.

Twenty Thousand Leagues Under the Sea has been adapted into countless movies, books, musicals, plays, games, comics, and amusement park rides. The character Captain Nemo has inspired many other Nemos.

Many scientists and explorers point to Verne’s novel as their source of inspiration. Simon Lake claims to have been inspired to design submarines by the novel. William Beebe, Sir Earnest Shackleton, Robert Ballard, Edwin Hubble, and Jacques Cousteau all credit Twenty Thousand Leagues Under the Sea as a significant influence on their life’s work.

Many author’s point to the novel as helping to spark their imagination, including Arthur C. Clarke, Ray Bradbury, and J. R. R. Tolkien.

Jules Verne inspired generations of scientists, authors, and fans. Many of humanities greatest inventions came from minds that were first sparked by Twenty Thousand Leagues Under the Sea. The novel’s impact on society may never be truly measured.

Jules Verne was inducted into the Science Fiction and Fantasy Hall of Fame in 1999. His status as one of the greats came from perhaps his most famous novel. Twenty Thousand Leagues Under the Sea is one of the greatest science fiction novels of all time.