Once again we return to our list of the greatest science fiction novels of all time. We are selecting novels for our list based primarily on the awards each received. As we discussed in previous installments, using awards as objective evidence of greatness can be deceiving.

A novel that was published during a below average year might run away with all the awards. Likewise, amazing novels that were published in the same year might split the awards amongst themselves.

The other obstacle to our pursuit of an objective list is the awards available. Today there are more awards handed out to science fiction novels than ever before. At the same time, there are also more novels eligible for these awards.

Do these two facts cancel each other out? Our last entry in the list would argue against the notion that novels cannot achieve the same level of greatness due to the variation in award selection criteria and the vast legion of competitors.

Many of the awards available today are recent entries into the landscape of science fiction. Some did not appear until the 1980s; others appeared in the 1970s. Selecting entries for our list when only the Hugo Award was available will pose some challenges for us, not to mention the decades before even the Hugo was invented.

Fortunately, we will leave that quest for another day. Today we will look into the 1970s once again,  when so many of the great science fiction novels were written. At the time, there were only the Hugo, Nebula, Campbell, and Locus awards handed out regularly with no limitations. The BSFA Award was also handed out, but it required publication in the UK. The Jupiter Award was briefly awarded, but lacked consistency.

Before we get to this latest entry in our list of the greatest science fiction novels of all time, we will revisit our entries so far.

The Forever War by Joe Haldeman 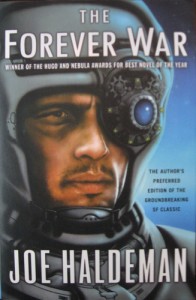 The Forever War by Joe Haldeman was one of the first novels the Science Fiction and Fantasy Writers of America Grand Master ever wrote. In fact, he wrote the novel as his master’s thesis in college.

The novel started its published life as so many of the greatest novels have, as a serialization in Analog Magazine. Later it was published in its first edition. The publisher decided to abridge the novel in its first release.

The novel itself captured much of the life experiences and views that Joe Haldeman discovered in the Vietnam War and mingled them with amazing science. The Forever War follows William Mandella as he takes part in a war against an alien race known as the Taurans.

The war pulls Mandella thousands of light years from home and forces him to deal with time dilation as well as the aftereffects of war. When the character returns to Earth, he finds that society has changed drastically over the many years he was away.

Haldeman uses the novel to explore many social and scientific ideas. He demonstrates his truly remarkable ability to tell a gripping story that touches the reader intellectually and emotionally.