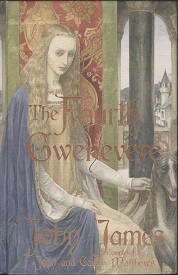 A manuscript is lost, known only by rumour. Dedicated to preserving the memory of its author, two true believers track it down decades after his death. Finally stumbling upon the word horde, they discover it unreadable, shattered into fragments. Aided by the few who are still able to decipher these forgotten pages, the followers painstakingly recreate the story that had once been lost.

That’s not the plot of The Fourth Gwenevere, it’s the tale of the book’s rediscovery by John and Caitlín Matthews. The novel was left, unfinished amongst John James’ computer files after his death in 1993. They have now pieced together James’ final novel, to reveal a new twist on Arthurian legend.

The Fourth Gwenevere owes more to Welsh myth than the French romance of Chrétien de Troyes. Our narrator is cynical, world-wearing Morvran, a follower of Arthur and King of Gwent, although as he sourly observes

in the social circles where I move kings are as common as sparrows on the roof.

Throughout the book, dry wit punctuates scenes of battle, as the Kingdoms of Britain collapse into civil war. This is a Dark Age tale of peoples jockeying for position, with the Britons facing the threat of incursion from Saxon marauders.

In the midst of it all is Arthur’s new wife, Gwenevere. Following the tradition of the Welsh Triads, Arthur had four wives, all with the same name, and we encounter each in the novel. Strangest of all is the last, the fourth. Her quiescence to the demands of the men who rule her life hides secret plans. She concocts these as deftly as the precious cloths that she weaves in her isolated chamber.

Like another posthumous book composed of fragments, J.R.R. Tolkien’s The Silmarillion, The Fourth Gwenevere does feel incomplete at times. This is especially true at the beginning where a confusing cast of characters come and go. This may be James’ intention, to create a modern text that resembles the incomplete sources that have come down to us from that time. Fortunately, once the true story begins, the novel becomes a gripping tale of treachery, bloodshed, and plague.

Written twenty years ago, The Fourth Gwenevere manages the trick of feeling both ancient and modern at the same time. The ancient world does feel truly different and the characters do not look and sound like modern people. The text is dense with detail of everyday life from these far-away times:

we kings danced before Arthur, as we had so often done on the eve of battle. Swords were brought, not the battle-proud grey blades of Damask and Bezant, but poor rust-brown things, blunt Heathen knives fit only to be trampled on. These were so spiritless that they might be drawn without need to satisfy their thirst for blood.

It feels contemporary in that the narrator Morvran ap Einion is simultaneously all-knowing and utterly bewildered. Morvran is like a fantasy equivalent of Breq, the starship narrator of Ann Leckie’s Ancillary Justice (this year’s Hugo Award winner). Readers who enjoyed puzzling their way through that tale of slaughter will find much to enjoy here.