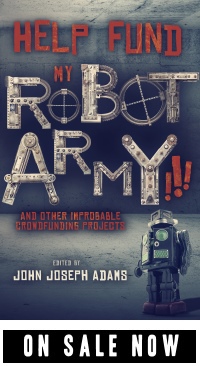 It was bound to happen sooner or later. Given that there is a strong recursive strain in science fiction, it was only a matter of time until a book about crowdfunding was published via crowdfunding.

I wrote about crowdfunding last year as a viable publishing model, and since then there have been an increasing number of crowdfunded titles. One of the most creative is Help Fund My Robot Army!!! It’s no surprise that the editor is John Joseph Adams, who has established himself as one of the most innovative editors in the field.

Adams tells the story in the introduction of receiving a story for Lightspeed magazine which was written as a Kickstarter project. That story was “Help Fund My Robot Army!!!” by Keffy R. M Kerhli. This immediately tripped a switch in Adams’ brain. (We need to figure out a way to trip more switches like this in his brain.)

The result was anthology of stories written as Kickstarter projects. Of course it was funded by Kickstarter, at an impressive 185% of its goal. (Yes, I was a supporter.) The anthology contains the title story, which was first published in Lightspeed, and thirty-two pieces of original fiction. And they’re highly original.

A few weren’t to my taste, but all of the stories herein are clever, creative, and certainly not run of the mill. All of the stories, like I said, are written as though they were Kickstarter projects. That means there’s a section for Project Goals, Rewards, Updates, Comments, and other things found on a Kickstarter page. Not all of the projects are funded. Some don’t make their funding goals. Some are canceled for various reasons.  The creativity shown by the authors in sticking with the Kickstarter format and incorporating it into their stories was pretty impressive.

All of the stories succeed at some level. They tend to be relatively short, so you can read one while waiting for the bus, or standing in line at the DMV. (You could probably read several while standing in line at the DMV.) I found that the format tended to get old after reading about five in a row, but if I read one or two a day, then they stayed fresh and original.  And I had something to look forward to when I came home from work.

I listed some of the things you’ll find in these stories a few paragraphs back. That variety was one of the things that impressed me the most.  There were a couple of stories here and there that overlapped in theme or proposed project. But for the most part each one was different. It was like those fancy assortments of chocolate. This one is caramel, that one coconut.

Help Fund My Robot Army!!! is one of the most impressive anthologies I’ve seen this year. It was certainly the most ambitious. I highly recommend it.