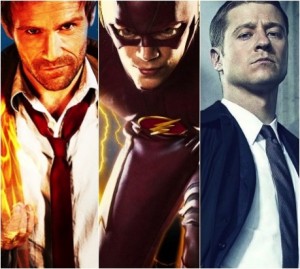 We are half way through September and it can only mean one thing. The return of the Fall premiere season on TV. Luckily with many new sci-fi shows being so popular we get many of the shows within days of the US (although The Leftovers only starts this week in the UK). There are so many new shows launching this season but there are three that are getting me itching to watch, they are all comic book adaptations, and are all from the world of DC Comics.

The DC universe is ensuring it dominates the small screen before Marvel tries to fill the gaps with Agent Carter the Netflix shows and not to mention season 2 of Agents of S.H.I.E.L.D. (which premieres the day after Gotham).

Gotham starts Monday 22 September. This is the prequel to the Batman movies, but rather than doing a Smallville and focus on the Dark Knight himself, Commander Gordon as a young detective takes center stage. From the previews, interviews, featurettes and trailers, this looks to be one awesome show.

The Flash starts Tuesday 7 October. We’ve already seen the man behind the Flash in Arrow which returns for its third season. He was about to get it on with Felicity before getting hit by lightening and going into a coma. The question is will there be a cross over between the two shows?

Constantine starts Friday 24 October. The Keanu Reeves film wasn’t much of a hit, but here’s hoping the TV show can excel where the film didn’t. The role of John Constantine is played by a busy, but relatively unknown British actor by the name of Matt Ryan. You may have spotted him in The Tudors or Vikings – I don’t but with his new blonde hair he looks almost unrecognisable.

The Artful Collector: IlluxCon 7 “The Prequel”

In this week’s viewing: Jujutsu Kaisen gets another murderous villain started up, Higurashi has another bloody end to an arc, Akudama Drive really piles them up, and more!

In this week’s viewing: RobiHachi puts its heroes where they didn’t mean to be, Midnight Occult Civil Servants takes a deceptively quiet stroll, and more!

Review: All the Wonder that Would Be by Stephen Webb