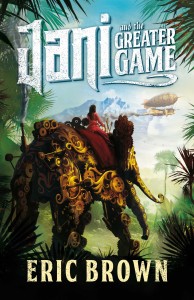 In Jani and the Greater Game, Eric Brown takes us on steampunk adventure through India at the time of the Raj. The year is 1925, and history has taken an alternate course. War poets like Wilfred Owen have new books out, while the discovery of a mysterious element, Annapurnite, now triggers feats of engineering throughout the British Empire.

Into this exotic milieu, Brown throws his young heroine, Janisha Chatterjee, who is caught in a desperate chase with enemies constantly at her heels. Her foes seek a precious object that she believes to be lost. Based in South Africa, Brown has a fine touch when it comes to describing life in a hot climate:

A fan turned lazily on the ceiling, the blades not so much cooling the air as stirring the humidity. White-liveried servants moved among the officers and their wives and dance band music played on the wireless. Alfie’s glass was beaded with condensation, matching the perspiration that stippled his round, overweight face. For perhaps the fiftieth time that evening he mopped his brow and cursed the heat.

The story is a terrific yarn with huge numbers of characters competing for the same prize. Here we have the Great Game played out in miniature with agents of the British and the Russians fighting a shadow war alongside the wider conflict for control of Central Asia.

Unknown to many of the combatants, this geo-political struggle is a minor affair when set against cosmic forces that lie secretly in wait. With its steamships, alternative universes and weird beings, Jani and the Greater Game has more in common with The Long Earth by Terry Pratchett and Stephen Baxter than the work of Jules Verne, the godfather of steampunk.

The French philosopher Roland Barthes once explained the enduring appeal of Verne’s 20,000 Leagues Under The Sea. Barthes argued that the Nautilus, Captain Nero’s submarine, is like a womb. It surrounds and protects the explorers as they head off into the unknown. In this story, Jani and her companion Anand use a mechanical elephant to flee their enemies. Known as Mel, the artificial elephant is a similar sort of haven to the Nautilus:

Jani curled on a chesterfield inside the mechanical elephant and waited for Anand to return.

She marvelled at the sumptuousness of the accommodation – what Anand had called ‘the living quarters’. It was as if she were inside a great chocolate Easter egg, an oval chamber constructed from polished mahogany and brass fittings. A woven rug lay on the floor and tapestries hung from the walls. Beside the chesterfield was a small bookcase containing classics of English and Indian literature. There was even a small pot-bellied stove, for cold winter nights.

The first book in an ongoing series, Jani and the Greater Game is an exciting page-turner with a neat conclusion. Enough mysteries are resolved to make the novel a good read on its own, whilst leaving many loose ends to be tied up in later volumes. If there’s one criticism to make, it is that the book lacks any kind of map, which can make following the action quite frustrating for those who are unfamiliar with the area. Perhaps the publishers Solaris would put one online? That would be absolutely spiffing.