Knights of Sidonia combines the surrealistic and the whimiscal 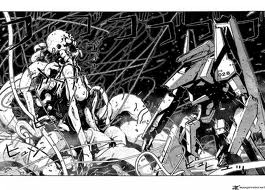 My first reaction when I heard the title Knights of Sidonia was to wonder whether Sidonia was a country bordering Freedonia. (And if you don’t know where Freedonia is, you have a serious gap in your classic comedy education.)

However, Knights of Sidonia is actually a space opera, created by writer/artist Tsuomu Nihei. Vertical is publishing the original manga here in America, and the first season of an anime adaptation was recently added to Netflix’s growing list of exclusives. (A second season is promised.)

So what is Sidonia, if it isn’t a country? It’s a generation ship, fleeing an Earth destroyed by the alien Gauna. The ship has been in flight for a full millennium when the action begins and young Nagate Tanikaze joins the training program for Gardes, the mecha that protect the Sidonia.

Like many mecha pilots, Tanikaze is different, but it’s difficult to tell so far whether that difference is good or bad. He’s one of the last naturally-born humans on board the generation ship. The majority of the crew has evolved into beings of an indeterminate gender, who survive through photosynthesis. Tanikaze wants to save humanity, but he made need to adjust his definition of what humanity is.

As a result, Knights of Sidonia alternates between well-paced battle scenes, political intrigue and even comedy as Tanizake learns about the new cultures on board the starship. The reader also learns more about the Gauna as the story progresses. They appear to be dedicated to the destruction of humanity, but they also seem to be using human genetic material to create an avatar that will allow them to communicate with their enemies.

Nihei’s art is the strongest part of the story. He’s equally adept at mecha design and the rendering the surrealistic Gauna. The Knights of Sidonia manga come with spot illustrations of various locales on the ship that don’t make it into the story. The umbrella title for this series is the misleadingly bland “One Hundred Sights of Sidonia.”

Sometimes, though, Nihei gets so wrapped up in the art that the story evaporates. The plot of “Sidonia” is stronger than some of his other projects , such as Biomega and Blame!, but it can still be a problem. The cover copy for the first volume of “Sidonia” makes an oblique reference to the question when it describes the series as “meticulous drawn, peppered with clipped humor but also unusually attentive to plot and structure.” 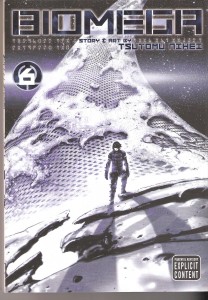 Knights of Sidonia may be connected to Biomega and Blame! But all three series stand by themselves. A corporation/organization called Toa Heavy Industries is referred to in all three stories. In addition, a super-intelligent, humanoid bear is a character in both Biomega and “Sidonia.” Where does the bear come from? I can’t find an explanation. It may be that Nihei just likes to draw the character. If forced to make a guess, I’d say they’re parallel timelines.

There’s a trailer for the animated “Sidonia” on YouTube, and the manga is available here. Frankly, I’m not a Netflix subscriber, so I can’t say anything about the anime, but the manga is definitely worth a look.

I have a personal rule not to get involved in online discussions which have the potential to turn fractious. Yesterday I made the mistake of responding to a kindly put question on a well known social media site. The question was, should people boycott a film based on a book because of the views of […]

Oh Thank Goodness! There Will Be No Editorial Today

Next Generation Readers and the Future of Fandom

Playing the Short Game: How to Sell Your Short Fiction (Part 20 in series)