Sometimes…sometimes the movie is actually better than the book. The Hunger Games’ Mockingjay trailer suggests we may be seeing one of those rare times when this is so.

When asked my thoughts on the Hunger Games third and final installment, I have to admit I wasn’t overly fond of the book.

I reviewed the novel as a writer and a critic 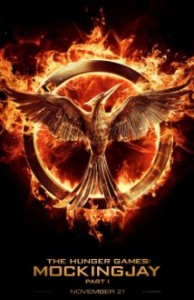 more than a reader. So far, with each cinema production, it’s been my opinion that the movies are much more suspenseful and richer in content than the books.

That being said,  I can understand how the general populace has embraced the story.

The premise, teenage sister voluntarily takes her younger sister’s place in the Hunger Games, a televised fight in which two teenagers from each of the twelve Districts of Panem are chosen at random to compete to the death.

Hunger Games introduced us to Katness, a strong female character that isn’t overbearing but rather humble, intent to do right first by her sister, and then in the arena . Personally I think Jennifer Lawrence has done a wonderful job of improving on a more or less drab (book) Katness. Even though the premise is dark and gloomy, Hunger Games the motion picture was well done, and though it followed the story line closely, Jennifer improved on some of the character’s development, made her believable, and someone the audience hopes is successful. Though children slaying of children will never be a favorite premise of mine.

The next installment, Catching Fire, I didn’t care much for book nor movie. Perhaps you could say the production did the best it could with what little it had to work with, I’m not sure. I think some of the supporting characters’ personalities were lost in the movie. For me (and I know the world disagrees) the book was a repeat of Hunger Games.  Catching Fire was basically the same story just different people. Granted, there was a twist when the Tributes decided to unite and turn on their true foe, but perhaps it was too predictable. I don’t know.  The flaming dress was awesome in both and indeed the highlight simply because it spoke blatant rebellion. Still, while reading the story I was almost tempted to set the novel down.

For me, Mocking Jay, the third book was a disappointment. I felt the story was rushed for a resolution and some of that resolve was quickened by bringing in monsters that didn’t exist elsewhere hence breaking some fundamental rules of world building, and making the outcome all too convenient. Not to mention I was pulling for Gale over Peeta the entire time. Still am. He’d make a much better partner for Katness, but we’re honing in on personal opinion here.

For all my pessimism I watched this teaser with an open mind and admit that this trailer has picked up my interest again. Perhaps there is something about the written word that didn’t create the tension and excitement that cinema can. And of course again, I admire the skill and talent of Jennifer Lawrence.

Granted, I’m basing my opinion on a mere one minute teaser but I must say, judging by the few quick scenes, this movie will keep viewers on the edge of their seats, and will bring some of us Nay Sayers back to the game!

Streaming Genres: SF, Fantasy and Horror on Hulu and Hulu+

I used to play with My Little Ponies. I hated dolls, kept my hair short, wouldn’t wear dresses, but even I was susceptible to the unbearable cuteness of My Little Pony. For a while I kept a sizeable stable of them at the foot of my bed. Imagine my shock when I found out that […]

In this week’s viewing: Hakyu Hoshin Engi continues to trim the cast, Megalobox reaches a turning point, and more!

Silurian Hypothesis: What If Humans Aren’t the First Civilization on Earth?