RK Troughton continues to assemble a list of the greatest science fiction novels of all time, based on objective measures

Expecting two fans to agree that a single novel is the greatest of all time would be asking for the impossible. The truth is that no single novel in science fiction could genuinely carry that label.

Many amazing novels have been written over the years. Each has its own characteristics and differences that make it unique. Comparing them side by side has no real value.

With these differences in mind, we continue to assemble a list of the greatest science fiction novels of all time. As has been stated in previous installments of the list, the entries appear in no particular order. They are intended to represent a broad spectrum of novels that any science fiction fan can point at to share with those unenlightened readers that have yet to experience science fiction first hand. They serve as a starting point.

Selection onto the list continues to be driven by the awards each novel has received as well as its commercial success. Commercial success normally means that it has connected with the readers on a significant level.

Before we get to this week’s addition, let’s review the list so far. 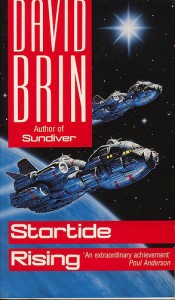 Startide Rising is the second novel in David Brin’s Uplift Universe series. Many consider it to be one of his greatest works as well as one of the best examples of science fiction ever written.

The novel takes the reader into a future universe where alien races live alongside humans and the uplifted races. David fills the novel with fresh insight and technological wonders while presenting thoughtful characters and amazing action.

Last year I had the opportunity to ask David Brin about Startide Rising and the Uplift Universe. I asked him to describe the origins of his wonderful creation and what new readers could discover there.

Seriously, I was always fascinated by our relationship with the “highest” animal species on Planet Earth. The more I learned — talking to researchers who knew cetaceans and apes intimately — the more I realized these creatures are not quite as smart as mythology pictured them…but they wanted to be! Both dolphins and chimpanzees seem frustrated and eager to accomplish more than they currently can achieve, in solving problems, in communicating with us.

So? Suppose someday soon we became capable of giving them a hand? Of helping them cross the remaining gap and becoming skilled members of an advanced civilization? What an interesting society that might be! With our horizons of tolerance and citizenship expanded, along with new styles of wisdom…

…only what if others out there had already done this same thing?”

In Startide Rising, you will explore the adventures of the spaceship Streaker as it must face the consequences of discovering ancient technology that could change the balance of power. The crew, largely made up of uplifted dolphins, must survive the storm of attention their discovery brings.

The novel is filled with something for everyone. David manages to infuse the novel with his positive outlook so when you finish the last page you are left satisfied with a smile on your face, as if you had just finished your favorite meal.

Vote for your Favorite Guardians of the Galaxy Character

The Artful Collector: Where Are They Now? Spotlight on Artist Rosana Azar

This week Steve examines a prolific author of the ‘40s and ‘50s who seems to be nearly forgotten today. Maybe we can change that!

Space cats, fighters wielding giant paintbrushes, evil ones with exposed brains and more atmosphere than you can shake a stick at – it’s Anime!

New Releases in Science Fiction/Fantasy/Paranormal Romance for MAY 13