Guardians of the Galaxy vs Star Wars. There’s an awful lot of similarities, but one of those films is clearly a good couple of parsecs better than the other!

I am not the only one who has been making comparisons between Marvel’s latest film Guardians of the Galaxy and that hoary old space fantasy favorite, Star Wars, now more than one full generation gone. (Yes, kids who watched Star Wars as kids have now had enough time to grow up and become relatively new grandparents! Think about that!) 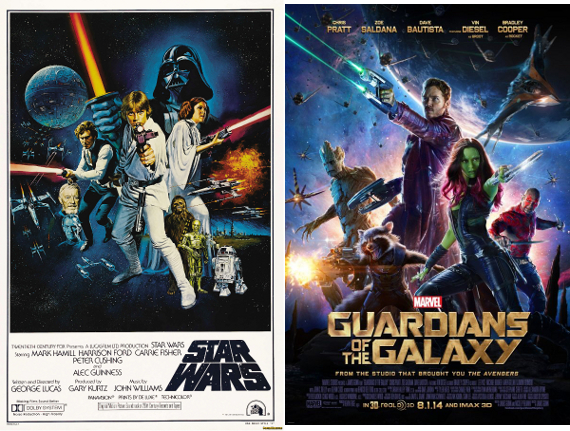 But if that doesn’t convince you, try this:

Yeah, ok, not all of those are great matches, but if you’ve seen both films you have to admit that there are enough similarities to make one sit back and take notice.

Take R2D2 and Rocket for example:  both are tiny, peripatetic, foul-mouthed over-achievers with hidden resources (though of course R2 did his cursing in bot-speak).  And they both hang out with an unusual looking tall thing(?) guy(?).

Or how about Star Lord and Luke Skywalker?  Both abandoned by their parents (one of whom has SECRETS), both mentored by an older gentleman much wiser in the ways of the galaxy, both plucky losers with hearts of gold and a special weapon.  Both thieves, both unexpected monkey wrenches in the plans of evil powers.

Leia and Gamora?  Both are PRINCESSES!.  Neither is afraid of a good fight.  And both of them told their father off in a big way.

Yondu & Obi Wan?  Both have facial hair and seem to be fond of long, drapey clothing.  Both have morals at odds with the prevailing wisdom.  Sorcerer – like powers.

Groot and C3PO?  One talks too much, the other, not enough.  They’re both tall.  They both have to be checked with to gage the reaction to the emotion of the moment.  Both are nearly destroyed during the course of their adventures.

Han & Drax?  Easy.  Both are outlaws.  Drax is literal-minded, Han never takes anything seriously.  Neither has any real good reason to throw in with a bunch of losers on a hopeless quest to save the galaxy, but they do anyway.

Corpsman Dey and Chewbacca? Well, to be honest, I couldn’t find a better match for Chewie – he’s kinda part Groot, part Rocket.  On the other hand, he does get a medal at the end of SW and Corpsman Dey gets the last scene in Guardians, so, what the heck.

You can do the same compare between the baddies in both films too:  Ronan the Accusser is clearly Darth Vader;  Thanos, the Emporer and Nebula is no one but Darth Maul. 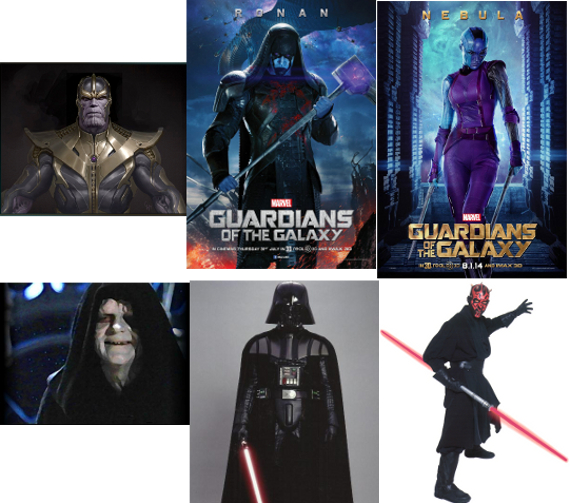 Yep, chins, helmets and attitude, all pretty much the same!

We’re looking at a smarter, faster, BETTER update of Star Wars in Guardians, one with cooler colors, more depthy characters and a better sound track (sorry Williams). I mean seriously – there is just no comparison between the Cantina Band and Hooked On A Feeling.  None. Well, yes, there is. It’s like comparin the Beetles at Yankee stadium with a lounge band in a casino ten miles off the strip.

Not to mention a film that has way more homages to the genre than Star Wars, like the alien that looks just like a Lectroid from Buckaroo Banzai.  Star Wars was too stuck up on itself to even think about doing that kind of thing (unless you want to count that sand worm skeleton…)

So, let the comparison wars begin.  I’ll start:  Guardians of the Galaxy is a far better film than Star Wars because…stuff!

Guardians of the Galaxy: Second View

An examination of the novels of Argentinian author Samanta Schweblin