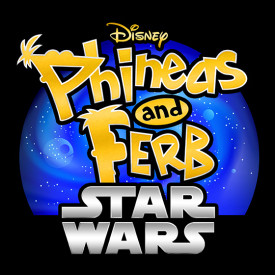 “A couple summers ago in a galaxy far, far away…” the Disney acquisition of Lucasfilm caused a lot of excitement (or dread) by opening new possibilities in the Star Wars franchise. While the buzz about the latest animated installments and the upcoming extension to the film series has been virtually nonstop, Disney has taken this unique opportunity to utilize the Star Wars popularity in many crossover episodes of other Disney produced projects.

To say Disney is successfully tapping into this resource is an understatement. But on occasion, the tables turn and the true benefactor may be the mega science fiction franchise and the throng of followers.

If you’re not familiar with the animated television program Phineas and Ferb, let me give you a quick synopsis. Phineas Flynn and Ferb Fletcher are step brothers who spend their summer vacations creating outrageous contraptions way beyond their years to pass the time. Their controlling older sister Candace Flynn is obsessed with “busting” her brothers. A subplot involves the brother’s pet platypus named Perry who happens to secretly be a spy. The fedora clad Agent P works for the Organization Without a Cool Acronym (OWCA) battling his arch nemesis, the bumbling mad scientist Dr. Heinz Doofenshmirtz.

In the Disney crossover, the cast is thrust into the Star Wars universe where they embark on their own adventure, all taking place in the background of the original film A New Hope. To the casual fan of the television show, it is a cute takeoff on the classic film. But to the diehard Star Wars fan, it is much more. Even though the writers slap a disclaimer at the end of the iconic scrolling prologue, “And none of this is canon, so just relax,” the script remains loyal with intentional references to the theatrical film. 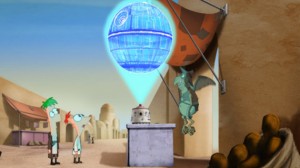 The clever juxtaposition of Phineas and Ferb: Star Wars is the concurrent storyline familiar to the fans of the humorous animated show and the legend of the original space opera film. We get answers to a lot of our questions, and a few we didn’t know we needed. The list of paralleled story references was extensive, but a few stood out.

I’m going to assume that you, the reader, is well versed in the Star Wars story. If not, I apologies and ask that you just role with it (or take the time to look it up on the interweb if you feel the need).

We all know Princes Leia hid the plans of the Death Star in the droid R2-D2 and sent him off in the escape pod in search of the legendary Obi-Wan Kenobi. But here we learn that Agent P was the rebel spy who obtained the disk and turned it over to Leia.

Did you know the original Death Star plan started out as a laser-beam nutcracker invented by Dr. Heinz Doofenshmirtz, but the Empire took his idea an made it “completely impractical” by making it too big. Of course, Doofenshmirtz is just as surprised to find out his time share on Alderaan has dropped instantly.

In a cantina, Phineas and Ferb (also moister farmers) overhear two creatures discussing who they thought shot first as they carry the body of Greedo off on a stretcher. It’s good to see the debate continues. 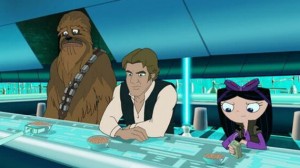 In the television show, Isabella Garcia-Shapiro is a little girl who has an insatiable crush on Phineas. Here, the little girl is a hotshot pilot-for-hire. It turns out she is a competitor of Han Solo who eventually convinces the nerf herder to go back and help Luke battle the Death Star.

This is only a small sampling of the Phineas and Ferb: Star Wars special episode. But if you’re a fan of either (or both) stories, you’re sure to come away with a huge smile. The galaxy is still far, far away, but it will never be the same.

A review of the second issue of Le Novelliste, a surrealist speculative fiction magazine

Do You Think the Martians will be Free?