Bacon prices have risen to unprecedented levels since 2009. There is a tipping point in humans affairs that occurs when the majority can no longer afford its favorite artery-clogging treat. The last time bacon prices were this high in relation to peon wages, lots of people could be heard shouting “off with their heads!” in French…. 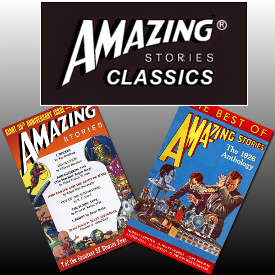 Radish Reviews Link Post (If you want to expand your understanding of diversity, this is an excellent collection of current links)
Post Binary Gender In SF
Sexual Harassment At Comic-Con (a registered trademark of SD Comic Convention Corp) (via Andy Porter)
Followup on Cosplayer Assault
Not Doing Enough About Harassment
The National Review on Fake Geek Girls 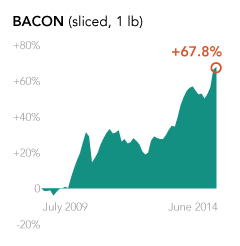 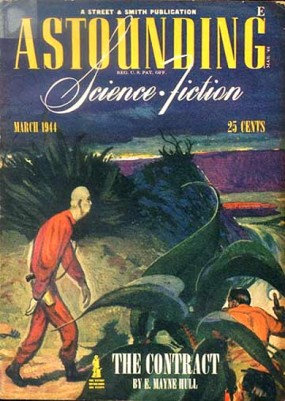 Of Atom Bombs and Astounding SF:  Cleve Cartmill’s Deadline
Science Fiction is Taking Over London In August 2014 (Check with the Dalek’s, they might want it back)
George Takei To Host Pittsburgh Symphony Pop SF Spectacular

UNCANNY MAGAZINE FUND RAISER (New Professional SF Literary Mag)
Two Comic Cons Fight Over Name (Comic-Con is a registered trademark of San Diego Comic Convention Corporation) (Comic (-) Cons all over US have registered their names)
How Gary Gygax Lost Control of TSR
The State of British SF
Mythology of the Future Workshop
Interview with Neil Clarke
Amazon Explains Its reasons For Fighting With Hachette:  They want ebook prices to be lower.  (So discount and eat the smaller margin.  Hachette doesn’t have to do a thing for Amazon to accomplish this.)
SFWA Aska Hollywood:  Where’s the Diversity?
HWA Accepting Self-Published Author Members 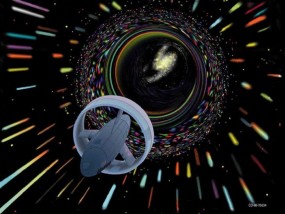 Tickets for our world exclusive event with George RR Martin and Robin Hobb are now on sale.

Spend an evening listening to two to two of the world’s greatest storytellers, discussing how they build their fictional universes, create their characters and balance fantasy and reality; about their influences and inspirations, their struggles and successes.

The event will be taking place on the 19th August 2014, at 7:30pm in a central London location that we’ll disclose nearer the time. Tickets cost £45 and each will include a copy of Robin Hobb’s new book, Fool’s Assassin.

Tickets are selling fast, so if you’re not lucky enough to get one, our event sponsor blinkbox Books will be streaming the full event – live and exclusively – on theirFacebook page.

We’re also running a competition to win a signed box set of both A Song of Ice and Fire and a signed copy of Robin Hobb’s Fool’s Assassin. Simply ask your best question for either author on Twitter, Facebook or Tumblr using #AskGeorgeAndRobin before 5pm on the 8th August and the 3 best questions will win.

We look forward to meeting you all on the 19th August

“Uncanny will feature passionate SF/F fiction and poetry, gorgeous prose, and provocative nonfiction, with a deep investment in our diverse SF/F culture. We will publish intricate, experimental stories and poems with verve and vision from writers from every conceivable background. The Uncanny team believes there is room in the genre for stories that inspire the imagination, challenge beliefs, and make readers feel,” Lynne says.

Uncanny issues will be published as eBooks (MOBI, PDF, EPUB) bimonthly on the first Tuesday of that month through all of the major online eBook stores. Each issue will contain 4-6 new short stories, 2 reprinted stories, 2 poems, 2 nonfiction essays, and 2 interviews, at minimum.

Material from half an issue: 2-3 short stories, 1 reprinted story, 1 poem, 1 nonfiction essay, 1 interview) will be posted for free on Uncanny’s website (built by Clockpunk Studios) once per month, appearing on the second Tuesday of every month (http://uncannymag.com/). Uncanny will also be producing a monthly fiction podcast.

The magazine is currently working on providing additional exclusive content just for subscribers. Subscribers and backers will receive the entire double issue a month before online readers.

Michael is a two-time Hugo Award nominee as the former Managing Editor of Apex Magazine (2012-2013). He also co-edited the Hugo-nominated Queers Dig Time Lords with Sigrid Ellis and Glitter & Mayhem with John Klima and Lynne M. Thomas. He also has worked as an Associate Editor on numerous books at Mad Norwegian Press, including Chicks Dig Time Lords and Chicks Dig Comics.

Michi Trota will serve as Uncanny’s Managing Editor. She is a writer, editor, speaker, communications manager, and community organizer in Chicago, IL. Michi writes about geek culture and fandom, focusing primarily on issues of diversity and representation, on her blog, Geek Melange. She was a featured essayist in Invisible: An Anthology of Representation in SF/F (edited by Jim C. Hines) and is a professional editor with fifteen years of experience in publishing.

Deborah Stanish will conduct Uncanny’s author interviews. She co-edited the Hugo-nominated Chicks Unravel Time: Women Journey Through Every Season of Doctor Who with L.M. Myles and Whedonistas with Lynne M. Thomas, and is a founding member and the moderator of the Doctor Who Verity! podcast.

Uncanny’s short fiction podcast will be edited and produced by Erika Ensign and Steven Schapansky. Erika is a founding member and producer of the Verity! podcast, and she produces a short fiction podcast for Apex Magazine. She also co-hosts The Audio Guide to Babylon 5. Steven is one of the three hosts of the popular Doctor Who podcast Radio Free Skaro, as well as a co-host of another Doctor Who podcast called The Memory Cheats.

We’ll have a newsletter in July with updates on the goings-on here at the Secret Moon Base, but we want to capitalize on the number of good notices the Press and our authors have been getting recently:
• Leigh Brackett inducted into the Science Fiction Hall of Fame
• Edmond Hamilton’s REIGN OF THE ROBOTS reviewed in the September issue of Asimov’s Science Fiction
• Back Issue #74 highlights the comic book work of Edmond Hamilton with a nice pic ofCAPT. FUTURE Vol. 3
•  C.L. Moore’s JUDGMENT NIGHT is blogged at SF Mistressworks
•  Author Howard Andrew Jones blogs on Leigh Brackett
• Henry Kuttner’s “The Time Trap” nominated for a Retro Hugo Award (and available in our collection, THUNDER IN THE VOID)
• Not to be outdone, Jack Williamson’s THE LEGION OF TIME has also been nominated for a Retro Hugo Award for Best Novel (the 1938 magazine version is in the 4th volume of JW’s Collected Stories, SPIDER ISLAND.

Striking while the iron is hot (so the saying goes), we’re offering the followingseven titles at a 40% discount until August 6th. The only catch: we’re asking for a minimum of four books per order (you may order multiple copies of the same title):

Shipping via Media Mail is $2.00 per book. Because of the Paypal ordering system, you’ll see this $2/book already added to the ADD TO ORDER button on each book’s ordering page.  *AK, HI, and International orders should contact us for a shipping quote.

You’re receiving this message because you requested to be notified of events at Haffner Press, or have done business with Haffner Press in the past. If you do not wish to receive these messages in the future clickunsubscribe and request to have your name removed.
.Copyright © 2014 HAFFNER PRESS5005 Crooks Road • Suite 35 • Royal Oak, MI 48073-1239(248) 288-4756 • www.haffnerpress.com
•  Keep Watching the Skies!  •

Like darkness and light, Yin and Yang, monsters and marvels are two sides of the same coin. Each entry should include both a monster and a marvel—though “monster” and “marvel” may refer to same element of your entry. For an example, see the excellent short by Peter Medeiros, Silence Like a Falling Chandelier.

The theme for this contest invites open interpretation: are monsters physical manifestations of evil, or will you write about the internal demons that plague us all? Marvels: fantastic bestiary creatures, or the resilience of human spirit?

We rely on your tax-deductible contribution to keep our contests free. Pledge today at SparkAnthology.org/support/.

Second Guest Judge to be announced

Deadline
The contest entry period opens September 15, 2014. Entries must be received by the end of the day October 1, 2014.

Watch the contest detail page at SparkAnthology.org/contests/seven for links to the entry form on September 15.

Fees
No fee is required for this contest. You will have an opportunity to make an optional donation once your entry is submitted. We rely on your tax-deductible contribution to keep our contests free. Pledge as little as $1 today through our Patreon page at SparkAnthology.org/support/.

Spark’s production costs are covered and contributing writers are paid in part through sales of the anthology and in part by generous donations from people like you. Funds for all remaining expenses are donated by Brian & Amy Lewis.

For full contest guidelines, rules, and restrictions, see the contest listing at SparkAnthology.org/contests/seven.

I’m delighted to announce a very special pre-release sale of legendary writer Larry Niven’s latest book Red Tide. The book will be released October 15 and the paperback will be priced at $14.99 and the EBook at $6.99.

However, you can download a copy of the book during the month of August for only $4.99.

The paperback version of Red Tide by Larry Niven, Brad R. Torgersen and Matthew J. Harrington is available for pre-order from Amazon. Click here to get more information or pre-order this new book from one of the true masters of the genre.

EBOOK OF THE MONTH

To get your book, look for the link on our online catalogue page or go directly to

BUT WAIT, there’s MORE (as usual).

Get Tom Paine Maru PLUS two additional books for a total of three great adventures.
(details on the download page)

I also want to announce the temporary suspension of our quarterly BookBale (pay what you want) sale due to a number of reasons. We hope to have the site active again once these issues are resolved.

Till next month then.

Thank you and good day,

I imagine it’s rather difficult to learn if there are non-English speaking authors who publish in English. That’s why I have started a sort of blog where you can see which Dutch speaking authors published work in English. And what’s more, I have added titles that are available as free downloads. See for yourself at www.adutchtreat.nl. If you think this might by interesting to your readers, please feel free to mention it.If this project will be successful, I am sure other European countries will follow suit.Kind regards,Arie Lodder.

Rejoice, the August, 2014 issue of Quantum Muse is now up at www.quantummuse.com.  A couple of months ago we had an editorial that suggest most people are average and that we should form a club and have tee shirts that say Mediocre and Satisfied.  Several people said they would like to buy that shirt, so we went ahead and created it.  If you’re interested in seeing them, go tohttp://www.cafepress.com/quantummusebooks/11447382We hope you enjoyed the July humor issue.  We now return to normal programming until October when the annual horror issue comes out.  If you or someone you know writes horror, please sign up and submit.We have a grand issue in August, starting with the artwork of John Alvin.following is a list of this months selections.The Fortress by Michele DutcherCities of Men by Rocky HutsonSlight Chance of Thunderstorms by Jessica BaumgartnerThe Waiting Room by Harris  TobiasPlease stop by and sample our treats.

Book Review: They Say the Sirens Left the Seas

Reviews, fiction, spanish language posts and Amazing History among our most popular posts this week.

Zeppelins, Tesla Coils, and an Argument for Escapism!

There Are No Photos of Neil Armstrong on the Moon?