Samantha is not impressed…. 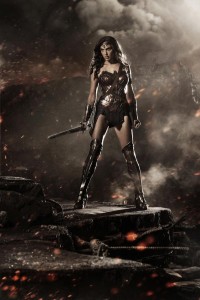 Another year, another San Diego Comic-Con…and another year I watched from across the pond via Twitter and online news sites. As always there were many reveals, but the one I was focusing on was Batman v Superman. Now another black and white picture of Batfleck didn’t excite me, the actual display of part of the costume (again not really giving anything away – but I hear that it may be because his costume isn’t completely black) didn’t excite me, then I heard about the Wonder Woman costume. I got excited, looked for the director Zack Snyder’s tweet and then I was disappointed.

Why does Wonder Woman have no colour in her costume. Is it because they felt one blue/red costumed hero was enough? Don’t get me wrong, the costume is impressive, I was just hoping for a little colour. What do you think of the costume? I still have no doubt that I will enjoy the film, but I’m not impressed with anything I’ve seen so far.

Review of After Earth starring Will and Jaden Smith.

Steve reviews the March-April F&SF and then the newish movie “Freaky.” Should you watch it? Maybe, if you’re younger than, say, 30. Otherwise… meh.